Review: ARCADIA Brings Freshness To The Coming-Of-Age Tale And The Road Movie 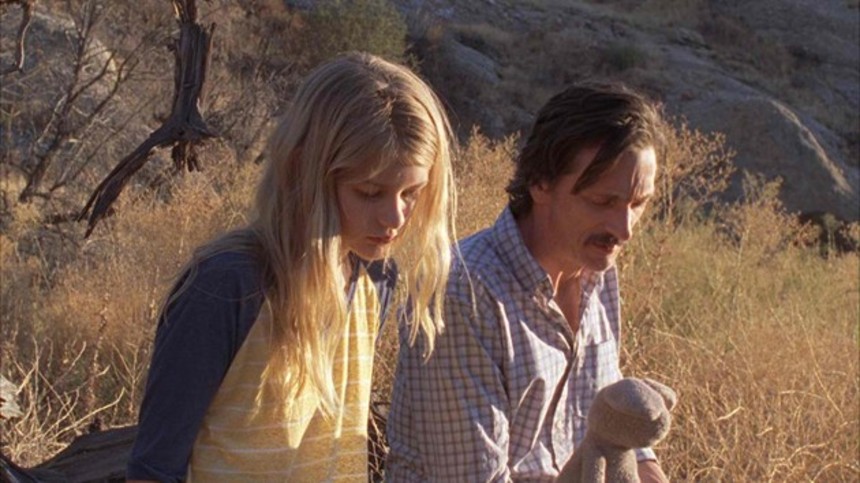 The coming-of-age story is a well-worn, indeed over-familiar mode of narrative, especially in films, but director Olivia Silver's feature debut Arcadia overcomes this pitfall by bringing great sensitivity and a nicely-honed sense of poignancy, as well as some fine performances to the proceedings.

Arcadia unfolds mostly through the eyes of 12-year old Greta (Ryan Simpkins) who, along with her older sister Caroline (Kendall Toole) and younger brother Nat (Ty Simpkins, Ryan's real-life brother), are woken up in the very early morning hours by their father Tom (John Hawkes). Tom piles them all in a battered station wagon, setting them off on a 3,000 mile journey from New England to their new home in California. Tom desperately tries to allay his children's fears about being so suddenly uprooted from their old home by talking up the much better life they will have in the sun-drenched suburbia of their destination. Caroline is more preoccupied with the boyfriend she'll be leaving, while Nat, excited about the prospect of seeing the Grand Canyon, willingly goes along with their father's plans. Greta is more concerned and senses that something isn't quite right; she's not quite convinced by Tom's vague answers to her questions about the whereabouts of her mother, and far more apprehensive than her siblings about what will happen to them. She holds tightly to her beloved stuffed rabbit to allay her fearfulness.
Arcadia thereafter becomes a road movie, with the shifting landscapes of cross-country as much a character as the family at its center. Along the way, Tom tries to keep things upbeat with grandiose promises about the great life that his new job will provide. However, definite cracks in this façade begin to show, in his volatile interactions with others, and the penny-pinching that has the family staying in charmless motel rooms and eating in cheap fast-food joints. Tom's quick anger puts the family in uncomfortable and potentially dangerous situations, most notably a road-rage incident that has them all sitting in a police station. As the film progresses, the family's true situation is gradually revealed, and Tom eventually has to come clean about what he has been keeping from them, and Greta must learn to grow up quickly with her new reality.
Arcadia boasts fine performances, especially by Hawkes, who nicely conveys the ambiguity of his character, whose motives are often as opaque to us as to his children, and by Ryan Simpkins, who emerges as quite the riveting young actress, who beautifully portrays her reactions to the changing emotional and physical landscapes around her. Shot on Super-16, Arcadia's shifting scenery is given a warm, nostalgic mood, courtesy of great work by cinematographer Eric Lin. These elements, along with Silver's sensitively written and directed scenario, make Arcadia feel fresh, notwithstanding its very familiar narrative modes.
Arcadia, winner of the Crystal Bear at the 2012 Berlin Film Festival, is now available in the U.S. on VOD through Comcast (until 3/15), and on Verizon and Charter through April. For more information, visit distributor Film Movement's website.

April 9th 2013 UPDATE: Arcadia will play at the reRun Theater in Brooklyn April 12-18. There will be Q&As after every screening with guests including director Olivia Silver, actress Ryan Simpkins, Jeff Prystowsky from the band The Low Anthem (who scored the film), and producer Mynette Louie. Click here to purchase tickets.
Tweet Post Submit

Do you feel this content is inappropriate or infringes upon your rights? Click here to report it, or see our DMCA policy.
ArcadiaJohn HawkesOlivia SilverRyan Simpkins