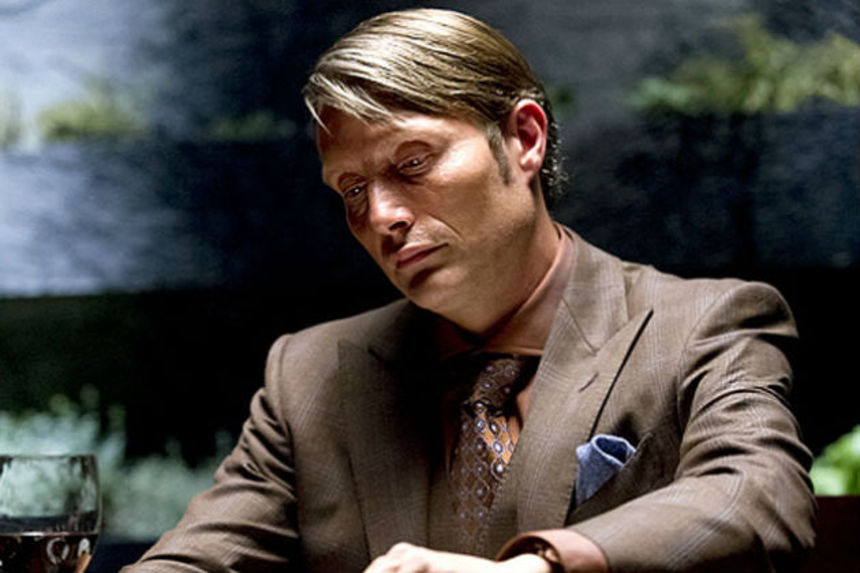 [UPDATED with information on international territory sales.*] The first teaser for upcoming U.S. TV show Hannibal left the titular character, played by Mads Mikkelsen, in the shadows, but a new, extended international trailer brings him into the light as a sympathetic, helpful psychiatrist.

He is charged by FBI Agent Dr. Jack Crawford (Laurence Fishburne) with helping troubled Agent Will Graham (Hugh Dancy) as he profiles a serial killer. Graham is presented as the darker half of the unlikely pair, with Dr. Hannibal Lecter the kindly, uninteresting civilian.

That reflects some of the descriptive passages in Thomas Harris' novels that explored the earlier days of the characters, which is where the new show begins. One concern that pops up here is to what degree Hannibal will keep the character exploration in the background while a new criminal case is solved in the foreground -- perhaps even a new case every week.

On the positive side: Mads in a bewildering variety of suits!

Hannibal debuts on Tursday, April 4, via NBC in the U.S. You can watch the trailer below.

[UPDATED 3/1/13 20:15 pm*.] At the prompting of commenter "stwsr," I did a little more digging. One of the companies behind the series is Gaumont International Television, the Los Angeles-based arm of the French company. According to Deadline, the series sold to "Canal Plus in France for pay-TV, Canada's City TV for free-to-air and Nordisk in Scandinavia for DVD." That was in October 2012.

Last month, Deadline reported that the series sold to Sky Living HD in the UK.

Note that this is described as the "international trailer;" it was created by AXN International, which, according to C21 Media, is a network owned by Sony Pictures Television, When and where will it be distributed?


The series, based on Thomas Harris's character Hannibal Lecter, will air on AXN in 63 countries in 18 languages across Africa, Asia, Latin America and Europe.

Hannibal is expected to launch on AXN soon after its midseason debut on US broadcast network NBC, which has made an initial order of 13 episodes.

[The series has also been sold to] ProSiebenSat.1, which will air the series on its networks in Germany, Austria, Switzerland, Sweden, Norway and Denmark.

To date, 12 episodes have been completed, per Gaumont International's Facebook page for the series. We'll keep an eye out for any other sales to international territories,but it's clear that tens of millions of people outside the U.S. will have legal access to the show.

Do you feel this content is inappropriate or infringes upon your rights? Click here to report it, or see our DMCA policy.
Bryan FullerHugh DancyLaurence FishburneMads MikkelsenThomas Harris