You Will Believe A Man Can Shrink. THE INCREDIBLE SHRINKING MAN Getting A Reboot 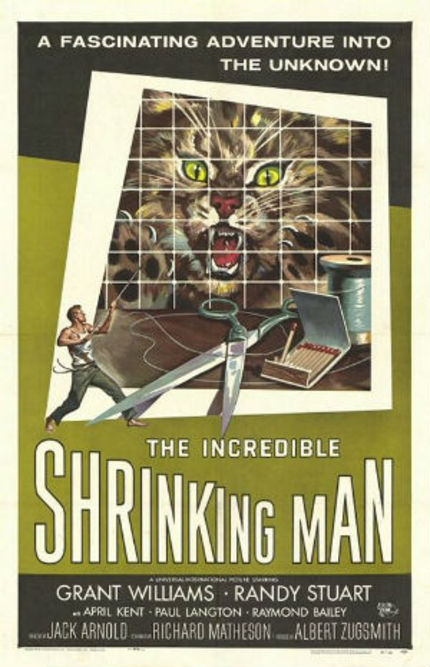 Jack Arnold's The Incredible Shrinking Man is a science fiction classic, thrilling in its execution and terrifying in its implications. But, you know, it's in black and white, and it's older than dirt (i.e. made in 1957), and MGM is out of bankruptcy now, and so we're getting a remake, according to The Hollywood Reporter.

Now, the only thing that tempers my knee-jerk groan is the involvement of Richard Matheson, who wrote the novel (The Shrinking Man) that inspired the movie. The still-working Matheson, 87, will co-author the screenplay with his son Richard Matheson, Jr., which means the new version has a shot at something good.

How will the story be updated?


The Mathesons will modernize the story to reflect advancements such as nanotechnology. Describing the new iteration as "an existential action movie," the elder Matheson says, "My original story was a metaphor for how man's place in the world was diminishing. That still holds today, where all these advancements that are going to save us will be our undoing."

Matheson is a great writer. In addition to the screenplay for the original film (one of his earliest screen credits), he worked on Roger Corman's adaptations of Edgar Allan Poe in the early 60s, wrote memorable episodes of The Twilight Zone (including "Nightmare at 20,000 Feet"), penned Steven Spielberg's TV movie Duel, and on and on. More recently, he furnished inspiration for Francis Lawrence's I Am Legend, Richard Kelly's The Box, and Shawn Levy's Real Steel.

But, but, but, MGM has been planning a flurry of "reboots," including Ben-Hur, Poltergeist, The Idolmaker, Mr. Mom, and, most notably, Robocop. Are they just throwing a lot of ideas at the wall and seeing which ones stick? Sure, that's what studios do, but the new MGM has not yet developed a track record for development. Robocop, with its unconfirmed rumors of troubles between director and studio, will no doubt provide insight as to where MGM may be heading.

And for more perspective on the original's enduring merits, here's Scott Weinberg on the (then impending) Blu-ray release.

More about The Incredible Shrinking Man