Review: SNITCH Doesn't Reveal Anything Except Its Good Intentions 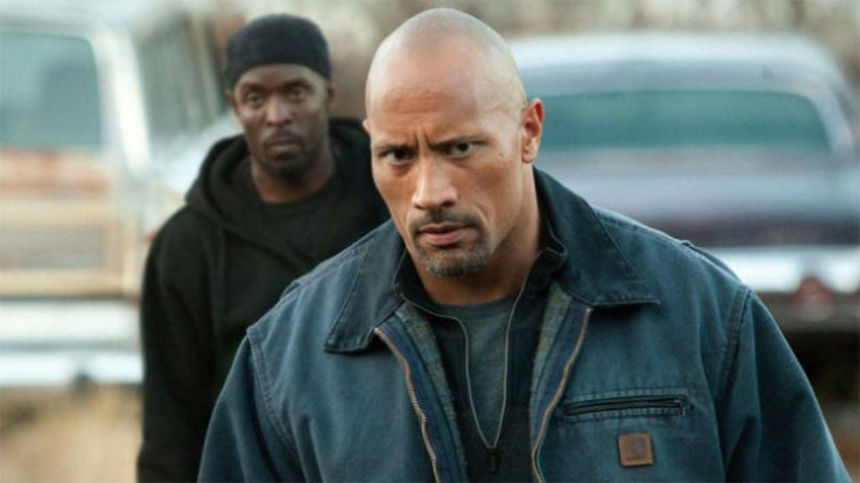 A well-meaning but lumbering drama that feels like an extended prologue in search of an action movie, Snitch represents a good-faith attempt by Dwayne Johnson to stretch himself as an actor.

Johnson became an action star based on his affable, pleasant personality and an intimidating physical presence. Like many action stars, however, Johnson has evidenced a desire to widen out. Thus, he has taken dramatic and comic supporting roles, began appearing in family-friendly movies, and even exposed a darker, more violent side in 2010's Faster, which worked pretty well because the action was propulsive and nearly continuous.

In Snitch, Johnson aims to establish himself as a dramatic actor, with a minimum of action heroics. He plays John Matthews, the owner of a successful construction company somewhere in Missouri, in the Midwest U.S. He is honest, hard-working, and considerate of his employees. His good-hearted nature is put to the test when his son Jason (Rafi Gavron) is arrested for possession and intent to distribute narcotics.

John is sure it's a minor infraction by his college-bound son, who's 17 and has been living with his mother Sylvie (Melina Kanakaredes) since his parents divorced. But then it's revealed that Jason will be prosecuted under a harsh first-time offender law, intended to provoke low-level drug dealers to snitch on their suppliers. Jason claims that he was set up by his friend and that he doesn't know any other drug dealers. And he flat-out refuses to set up any of his friends, even though his refusal pretty much guarantees that he'll receive a mandatory prison sentence of 10 years.

Desperate to help his beloved firstborn, and temporarily forgetting about the possible consequences for his second wife and infant child, John pleads with the district attorney (Susan Sarandon) to be allowed to go undercover in behalf of his son so as to reduce his sentence. She agrees, but only if John can somehow get evidence that leads to the major felony conviction of a drug dealer -- any drug dealer. That leads John to Daniel (Jon Bernthal), a recent hire at his company and, conveniently, an ex-convict trying to lead a straight and normal life. And this is the point of the story where the moral complications begin to multiply exponentially; the film coughs, stalls, and then flat-lines.

But it's still a long, long way to go before the movie is concluded, and its message has already been delivered.

Up to that point, it appears the slowly-building narrative will lead to an explosion of action. Instead, there's a sharp detour in which the film's point of view shifts to Daniel so his backstory can be fleshed out. Other detours pop up as well, which serve to weigh things down, without providing illumination on the questions raised. The detours hammer home the film's message with far more nails than needed.

That message is this: Well-intended 'mandatory minimum sentece' laws in the U.S. harshly penalize innocent kids like poor Jason, who never did nothing wrong except use drugs 'to try them out,' you know, for recreational and/or educational purposes. Why should he spend 10 years locked up behind bars with hardened criminals? And why should such a good kid be forced to set up his friends as the only recourse to reduce his unfair sentence and avoid ruining his life and his prospects for happiness in the world?

Snitch claims to be inspired by real events, but it fails to convince because it doesn't feel real. Sure, the fleeting moments of action, when they come (few and far between) are shot in documentary-style, which means quick-cutting, 'running with the camera'-style, the style where chaos reigns and comprehension is lost. 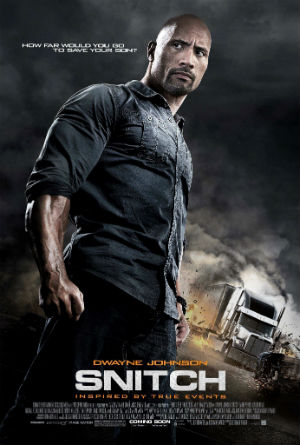 The direction by Ric Roman Waugh, based on a script credited to Waugh and Justin Haythe, favors foreshadowing of the most obvious kind, so that, for example, early in the movie when a package is delivered to Jason, we know he'll soon be sitting in a a jail cell. And when a judge scowls at the sight of the kid, we know he won't get a fair hearing. And when we learn that the district attorney is running for higher public office, we know she won't cut John and/or Jason a deal unless it's politically advantageous. And so on and so forth.

With every development mapped out in advance, an excessive amount of time is spent on filling in personal details of the characters without examining the moral quandaries that are created. John is Daniel's boss, and it's clearly an abuse of power, not to mention a criminal act, for him to exert pressure on his employee in an effort to force him to provide an introduction to his former criminal boss, Malik (Michael K. Williams), so that John can entrap him.

It's a sticky situation, and we're meant to empathize with John because he has the best interests of his son at heart, and besides, IT'S NOT ME, IT'S THAT DAMN STUPID LAW. John doesn't ever say that, but there's no way to watch the movie and not come away with the impression that it's the only thing the filmmakers wanted to communicate.

If Johnson were capable of delivering a dramatic performance that transcended the plodding material, or, again, if Snitch was filled with exciting, dynamic action sequences, the clumsiness in the screenplay and direction might more easily be overlooked. At this stage of his career, however, Johnson is only as good as his material. Called upon to carry long stretches of the story with muscular dramatics rather than his fists or his quips, his limitations are more readily apparent, especially since he's surrounded by such a talented cast. His outward appearance is as far as it goes -- mostly, he looks serious or concerned by staring straight ahead and keeping his chin up (literally).

Watching the great Barry Pepper in an effective supporting role as a law enforcement officer only makes me wish that he was playing John. He could add layered meaning to the dialogue, and communicate in subtle manner the conflicts waging war within John. The same can be said for Susan Sarandon, who plays the district attorney with an intriguing mix of chilly ambition and personal warmth, and for Michael K. Williams, who brings great energy and gusto to a stereotypical part. Jon Bernthal, best known for playing a fairly despicable character on TV's The Walking Dead, comes across very well as the sympathetic ex-con, but far too much time is spent trying to make sure everyone knows he's been forced into an untenable situation.

Yes, we know, we know. What we don't know is why he, and John, and the district attorney, refuse to speak truth unless they are forced to do so. And why they're presented as heroically-inclined characters when they're baldfaced liars.

And why, exactly, this specific case should serve as the meat of the story, a dramatic rallying cry for justice, rather than as the basis for a more straightforward action movie with a little message sprinkled on top.

P.S.: I very much enjoyed the work of Dana Gonzales, director of photography. Gonzales is a feature and television veteran, and also shot Waugh's previous film, 2008's Felon. The location settings look splendid, capturing a balance between the gritty and the golden, which at least makes watching the movie's visuals a pleasant experience.

Do you feel this content is inappropriate or infringes upon your rights? Click here to report it, or see our DMCA policy.
Barry PepperDwayne JohnsonJon BernthalRick Roman WaughSusan Sarandon