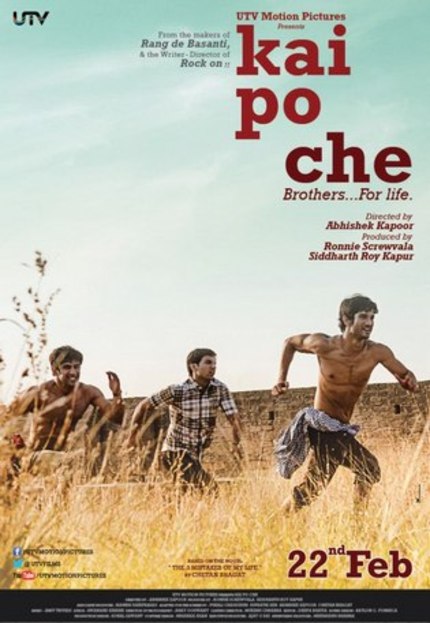 It's been a great couple of years for directing debutantes in India. Last year saw the first narrative work from Ashim Ahluwali, Miss Lovely, travel the world gaining praise on the festival circuit, and this year we have Abhishek Kapoor's first feature in five years, Kai Po Che, hitting international screens after an auspicious debut at the Berlinale.
Unlike some of its Indian predecessors in Berlin, *ahemDon2ahem,* Kai Po Che is actually a film that can stand up to international scrutiny without the need for handicapping. Kapoor's film is not particularly ecstatic visually, but it is a story told with unusual grace, something sorely lacking in most mainstream Indian fare. Therein lies Kai Po Che's ticket to the big time: the ability to tell a gripping, at times melodramatic story without undue embellishment, and it's a refreshing thing.

Three young men, Omi, Govind, and Ishaan, are the best of friends. These men live and die for one another, they pin their hopes for the future on one another, and those who love like brothers also fight like devils. They open a sports shop in a temple complex in Ahmedabad, a city divided by religion, but brought together as most Indian cities are, by cricket. When Ishaan finds a preternaturally talented batsman on the local pitch, Ali, it sparks concern when his Muslim father turns out to be the leader of a local opposition party. Tensions run high and all of the goodwill built by the shop comes crashing down in the wake of the Ahmedabad earthquake of 2001 and religious riots of 2002. The tension not only permeates the very air they breathe, but is punctures the bonds that have held fast for so many years.

Several of the reviews I've read of Kai Po Che take special care to explain that it is a movie about cricket, and if that is all that the reviewers can take from it, they are sorely out of touch with their own emotions. This is a love story, not as typical as the ones we usually see from India, and not a romantic love (though a subplot does exist), it is the love of brothers, a very special, at times volatile kind of love. Even as Govind holds tight to the purse strings, frustrating his brothers looking for a good time; even as Ishaan holds tight to his dream of making Ali into the greatest cricketer in India often to the detriment of his friendships and pocketbook; and even as Omi becomes sucked into that wretched cesspool that is Indian local politics, the brothers stick together, although they hold on more loosely.

At first, Kai Po Che looks like it may be begging for crossover success. The lack of song and dance numbers along with the relatively somber tone seems to signal sellout in the West, however, there is a great deal to be gleaned by Indian audiences that will likely sail right over the heads of the masses elsewhere.
One of the major pieces of the film that will be hardest to digest is the overt corruption and inherent volatility of Indian politics, especially at the local level. The idea of political riots, or political parties based solely upon religion is foreign to us here in the west, but the tribal affiliations in India are hundreds of years old, and the communities more steadfast because of it. Gujarat, the state in which the film takes place, is still relatively close to the border with Pakistan, and Hindi-Muslim tensions run high all along that area on the Indian side of the border. Even though all of our leads are Hindu characters, it is Ishaan's fondness for the Muslim boy, Ali, that ends up bringing the hammer down.

Abhishek Kapoor's film is a success, certainly, but I can't help thinking that there was wasted potential. Kai Po Che is a very good film, there's no doubting that, but the second half lacked the punch to turn it into a great film. Perhaps it is the number of overstuffed male bonding sequences. It could be the overwrought agony of the final steps in Omi's story arc which brings him face to face with his best friends. Or maybe it's simply the fact that in spite of all efforts to the contrary, the film descends into melodrama even as the city of Ahmedabad burns.
Kapoor should be proud of his film, there's no denying that, but I think there is also a teachable moment in here somewhere. This film was a little bit too slick, the emotions at play were too raw to be covered up so cleanly. I'll certainly enjoy seeing Kai Po Che again, but the temptation to label it as India's next great film (I'm already predicting this to be the Oscar submission for 2013) may be a bit premature. The director has greatness in him; let's hope he finds it soon.
In the meantime, Kai Po Che is a wonderful film that exemplifies what can be accomplished within the confines of Hindi popular film. See it.