Review: KADAL Is A Subpar Mani Ratnam Film That Still Outshines Just About Everything There Is 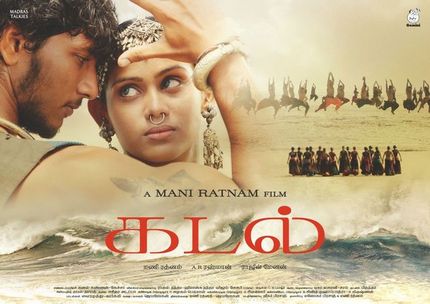 2013 is shaping up to be a year of high profile Indian directors making so-so films. A few weeks ago, I reviewed Hindi auteur Vishal Bhardwaj's Matru Ki Bijli Ka Mandola, a film with such a schizophrenic structure that it was hard to tell which emotions I was supposed to feel. Last night I caught Mani Ratnam's Kadal (The Sea), which is certainly much more focused and linear than Bhardwaj's film, but takes a glorious first half and squanders it on terribly predictable and overwrought melodrama before the final frames flicker across the screen.

I hate for this review to sound negative. I really enjoyed Kadal. A bad Mani Ratnam film is better than 99% of directors on their best day; however, with Ratnam looking in his rear view mirror at the critical drubbing of his last film, Raavan (Raavanan), I had higher hopes for a comeback. To audiences outside of India, Mani Ratnam is not a household name, however, in his homeland, he is probably one of the top five most respected directors in the country. His films have broached social and political topics that were largely considered to be taboo in Indian filmmaking, and he's managed to make it interesting and commercial without losing credibility. If you don't believe me, Hulu+ subscribers should take a look at his 2000 terrorism drama, Dil Se; it is among the finest Indian films of the last two decades.

Kadal is a far different beast from Dil Se, though not so far from Raavan, as they both deal with religious themes. Raavan was a modern retelling of the story of Ram and Sita from the Ramayana, recently illustrated in Nina Paley's Sita Sings the Blues. Kadal isn't a story from a religious text, but the Catholic faith of the fishermen in Kadal's village is very much a part of the film. Sins of the flesh take their toll on everyone, even the saints.

Describing the plot too much would quickly lead into spoiler territory, but the film revolves around several central figures. There is Sam Fernando, a seminary student who outs a fellow student for cavorting with women and is cursed when his friend is expelled from the seminary. There is Thomas, a young man who has survived more than any boy should be asked to when his mother dies and he becomes an orphan. There is Bergmans, the aforementioned disgraced seminary student. Finally there is Bea, the love interest of Thomas, an angelic girl who lives at the local convent and whose kindness knows no bounds. Her intellect, though, is that of a little girl.

The plot is probably the weakest part of the film, and explaining it any further would take some bite out of what is already a less than stellar script. However, the film accomplishes all it seeks to do with remarkable grace and style, and is probably destined to be one of the best looking Indian films of the year. Combine that with fantastic music from Ratnam's go-to guy, AR Rahman, and some amazingly shot choreography on the beach of this fishing town, and the first half of Kadal sets Ratnam up for the kill after intermission. Unfortunately, as is often the case, the plot gets muddled and Ratnam pulls more and more ridiculous devices out of thin air to propel the film forward in a very artificial way. The result is a film made all the more disappointing in the end because of how well it starts.

What began as a heartfelt story of a boy fighting for his life and a man seeking to better the lives of others turns into a convoluted tale of revenge, complete with mustache twirling villain. In any other film, I might have let it go, but it falls so far short of the mark when comparing the plot machinations of the second half with the more organic-feeling character development of the introduction that I couldn't help shrugging when I finally realized what was going on. Add to that the inclusion of a mentally challenged girl with whom a perfectly healthy boy falls in love (a la Barfi!) and I just felt as though Kadal missed the mark by attempting to squeeze too much out of what should have been a simple story.

Mani Ratnam need not hang his head in shame, though, Kadal will undoubtedly end up being one of the best Indian films of 2013. The cinematography, the music, and the performances by veterans and debuting actors alike are all fantastic. This is a film that just wasn't quite as good as the sum of its parts, in spite of the impressive pedigrees of those parts. This may be a film I warm up to on repeated viewings. After the initial experience, however, I can't help feeling that it was compromised.