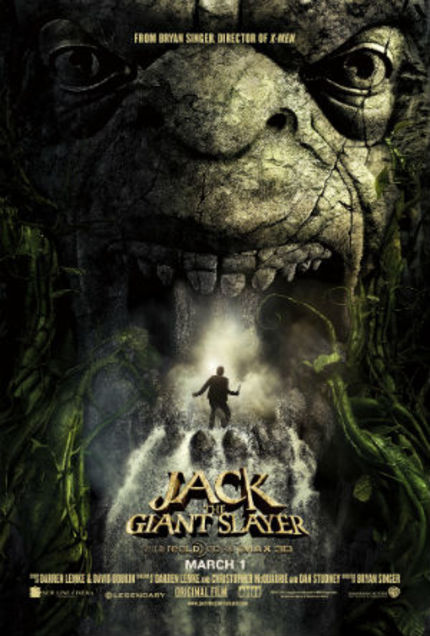 Color me surprised, because if Jack the Giant Slayer isn't quite the best movie of the year so far, it's at least a damn good one.

It's fair to say the movie had a stink about it. It was meant to come out last summer, and got pushed back for a variety of reasons, ostensibly to allow Warner Bros. to focus on reaping a gazillion dollars from their final Christopher Nolan Batman movie. The original director was replaced by former indie guy and now genre stalwart Bryan Singer, who rewrote the film with his long-time collaborator Christopher "Alas He's Not Related To Ralph" McQuarrie.

It's coming on the heels of a slew of other Faery-tale re-imaginings: two Snow White offerings, a Burtonian trip to Wonderland, and most recently the steam-punk, tongue-in-cheek madness that was Hansel and Gretel: Witch Hunters. Was the audience crying out for another retread of some ancient parable, this time drenched in CG imagery?

Well, there's a couple things Jack the Giant Slayer has going for it.

First, the script tames some of the more egregious proclivities of late, telling a story free from the buckets of irony and sarcasm that are usually employed as a form of distancing, allowing a modern audience to enjoy such an overt tale confident that they know what kind of story this is. Jack the Giant Slayer is close to a straight-up version of the events, told with astonishing plausibility, given the subject manner. Frankly, the film owes a lot to the likes of the Lord of the Rings films, where character is the heart of the story, under the remarkable and bombastic events that occur around the individuals we're made to care about in the film.

Second, the actors get both the tonality and scope of the work. This is where the film genuinely hits a home run. Quite simply, the cast is superb, and they manage to do more than their fair share of heavy lifting for the plausibility of the tale. This isn't the first time that Ian McShane has played royalty so convincingly -- I'm one of the few who enjoyed the mad experiment that saw him play Silas Benjamin on TV series Kings -- but he's absolutely note-perfect here, completely believable as both push-over father and steely ruler who must make hard decisions for his people.

Of equal delight for me was the return of Ewan McGregor to the wide-smiling, playful characters that he nailed consistently in the past, be they in Trainspotting, Moulin Rouge, or even the earliest of the Star Wars prequels. We even get the slightest hint of homage, with a delicately disguised take on "I've got a bad feeling about this," but even that wink seems earned and well within the context of the film. In shiny armour, he both looks and sounds the part, and it's great to see him bring his enthusiasm to such a role.

Then there's Stanley Tucci, channeling his best Christopher Sarandon from The Princess Bride, as a perfectly over-the-top villain played in the most delicious way, complete with sycophantic side-kick played by another Trainspotting alum, Ewen Bremner. The two come across as dastardly as required. 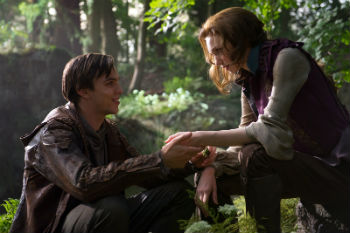 The two core performers are our titular hero and the capable damsel he must help rescue, and both also seem up for the job, even if their roles are even more straight-laced than the other, broader characters. Nicholas Hoult continues to impress; he was great in Warm Bodies, and holds his own against the more experienced players. Eleanor Tomlinson is also very well cast; she's both regal and pretty without the gloss of Hollywood that often sullies the look of young actresses. She's no emaciated, Sunset Strip nightclub chick doing her pouty thing on screen, but someone our lead character could clearly fall for, a young woman who seems capable enough on her own when the time is required.

Finally, we've got Bill Nighy providing the voices for the giants themselves. Big, lumbering mo-cap beasts, the filmmakers do quite a good job in providing the about-to-be-slayed creatures with personality. Sure, you get the same cockney inflections and gravelly intonation that's usually trotted out -- think Uruq-hai in LOTR -- but Singer and co. do well to keep things properly violent and macabre.

The film is actually quite violent, but done with a lot of off-screen culmination of the act of killing. This is perfect for such a tale; it's neither neutered to the point of banality, or overly gory to dissuade parents from taking their young kids. It's a good balance, just scary enough for a young viewer to invest in the story, but with appropriate moments of catharsis in which an adult audience can take solace. In other words, it's a traditional faery-tale, with all of its trappings intact, and that's certainly a good thing. Plus, when the story warrants it, we get our moments of squishy, eye-popping death on screen, its sparing use all the more effective when it finally occurs.

The studio probably won't be happy with the comparison, but the film it reminded me most of was last year's John Carter, another go-for-it film that was drawn from earlier works, but didn't come across as the result of a committee or some grand marketing exercise. It's perhaps odd that one has to go back to the tale of a boy and his beanstalk to find something fresh in filmmaking for adolescents, but we're at least here absolved of sparkly vampires, young wizards, or whatever comic book hero is next to be trotted out on screen.

Bold, brash, and free from overt irony, Jack the Giant Slayer proves to be a lot of fun, at times playing more like the central tale in The Princess Bride without any of the trappings of self-reflexivity. A sublime casts elevates what surely could have been a dreary work indeed, and for those willing to check their reservations at the door and go along for the ride, they just might find themselves having a heck of a good time.

Do you feel this content is inappropriate or infringes upon your rights? Click here to report it, or see our DMCA policy.
bryan singerEwan McGregorIan McShaneStanley Tucci

More about Jack The Giant Killer