Review: MAN ON EDGE, Shaman By Day, Gangster By Night 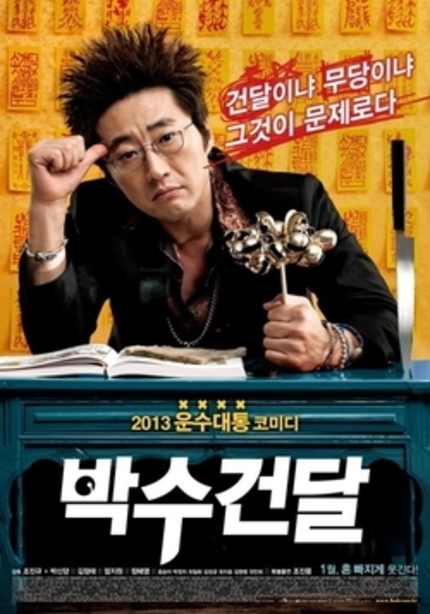 The gangster comedy, once one of the biggest money-spinners in the Korean film industry, has fallen out of favor recently.

Truth is, most high concept comedies struggle in the Korean marketplace these days. What is it about the mix between gangsters and comedy (frequently romantic comedy) that has so enticed Korean viewers? In a male-driven country dominated by social hierarchy, it could be that the infantilization of these hoodlums was a welcome source of respite within the safe confines of the country's multiplexes.

The first major Korean release of 2013 is also a gangster comedy, but there is one crucial difference. Another big element has been tossed into the pot: shamanism. Unlike gangster tropes, here comes something that is particularly Korean. It seems to have worked, as Man on the Edge is almost at the four million mark, making it one of the most successful high concept comedy offerings in years.

Gwang-ho is a gang boss' trusted right hand man and everything seems to be on the up and up for him until a knife cut from a gang brawl changes the fate line in his palm. He begins to experience things in his waking life that would be more at home in his nightmares and soon enlists the help of some shamans to cast out whatever is tormenting him. In order to do so he must undergo a ritual that will turn him into a fortune teller, and from then on he leads a precarious double life as a shaman during the day and a gangster at night.

Jo Jin-gyu, responsible for two thirds of the My Wife Is a Gangster trilogy, takes the reigns in what is very recognizable territory for him. Though he isn't stretching himself out a great deal, his familiarity with the genre affords the film a comforting degree of confidence. Inviting and warm-hearted, Man on the Edge is an easy-going picture with a strong roster of performers. However, the comedy derived from the fantastical gangster and shaman elements prove to be little more than window-dressing as at its core, Jo's film is really just another melodrama. Judged on that merit alone, there is nothing here we haven't seen before.

As Gwang-ho, Park Shin-yang handles himself well. He hits the broad comedy marks and switches between ridiculous and sweet, depending what side of the genre scale a scene lands on, with ease. However, as solid as his performance is, it is far from a memorable one. It's hard to buy him as a gangster (partly due to his buffoonish haircut) but then this is probably a deliberate move as it becomes easy to sympathize with him later on.

Concerning the rest of the cast, Kim Jong-tae and Kim Sung-kyun, who burst on the scene with killer performances in last year's Nameless Gangster and Neighbors, are strong as Gwang-ho's follow gangsters. Uhm Ji-won, however, stumbles as an over-the-top shaman, though I admit I'm not a fan of her particular brand of shrill-voiced comedy, which she previously demonstrated in films such as Romantic Debtors (2010).

In a move that brings to mind the equally successful Cha Tae-hyun vehicle Hello Ghost (2010), Gwang-ho develops an unwelcome ability to see ghosts and then starts to help them cross over to the other side. This is where the melodrama begins to take over the narrative. Premature separation leads to tearful goodbyes, carefully orchestrated and conveniently permitted by the supernatural premise. Though I was not always taken with the narrative's heightened emotional elements, I have to hand it to the filmmakers, as they clearly knew what they were doing.

Pleasant enough for the most part but bogged down by its bloated length, this gangster shaman comedy at times finds itself lost amid its disparate elements. As a professional, sleek and engrossing picture, however, Man on the Edge will deliver for the right audience. Sadly, I cannot count myself among them.

Do you feel this content is inappropriate or infringes upon your rights? Click here to report it, or see our DMCA policy.
Baksoogeondalcomedyfilm reviewgangsterkoreaKorean cinemaman on the edgemelodramapark shin-yangpierce conranshaman박수건달

More about Man on the Edge