Gangster Moonlighting As Shaman In Korean Comedy MAN ON THE EDGE 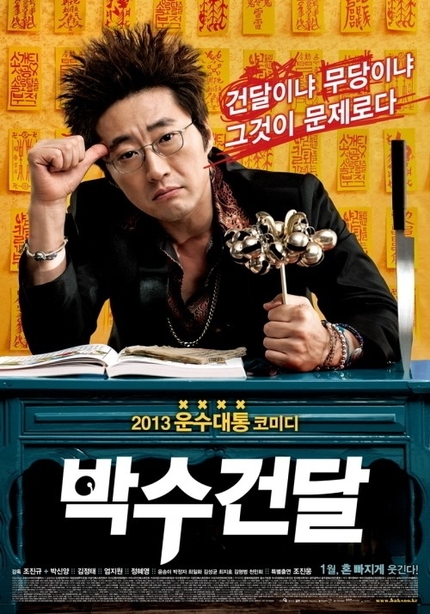 Currently smashing up the Korean box office with high grossing success is the gangster comedy Man on the Edge. It seems director Jo Jin-Gyu will continue to tread familiar ground in the Kkangpae - Korean gangster - world, as he has since the hit My Wife Is a Gangster series. As with those previous films, this will feature a mix of action and comedy but with a supernatural twist.

Strange things begin to happen to Kwang-ho (Park Shin-Yang), a famous mob in town, after he is stabbed in the hand during a fight. He concludes that the path of a shaman is the only solution to his problems, and juggles his vocation as a mob by night and his new role as a shaman by day. He's now known as 'veiled shaman' and even ghosts visit him for help. While Kwang-ho leads a dangerous double life, he begins to sympathize with a child ghost named Su-min. When Kwang-ho is about to help Su-min, his cover is blown and is attacked by a rival gang. Will Kwang-ho be able to fulfill Su-min's wish?

Do you feel this content is inappropriate or infringes upon your rights? Click here to report it, or see our DMCA policy.
comedygangsterJo Jin-GyuMan on the EdgePark Shin-Yang

More about Man on the Edge