Review: ANYBODY CAN DANCE 3D is a Kickass STEP UP Clone Worth Your Money! 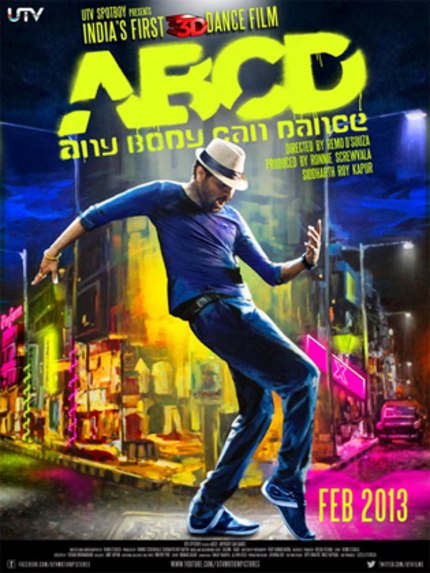 Remo D'Souza's Anybody Can Dance (ABCD) 3D could have been a monstrous disaster. Yes, the film stars India's most famous dance/choreographer-cum-big budget blockbuster director, Prabhu Deva, but is also co-stars a cast jam-packed with unknown performers. As heavily reliant as Bollywood films are on star power, ABCD seemed like a big gamble. Prabhu Deva may be a god amongst dancers, but he's not exactly a big box office draw. Thankfully it appears he and D'Souza did their research and mapped out every inch of recent dance films and adapted them beautifully for a new audience in India. ABCD is a lot of fun and a dance film that could reach beyond India given the right push. Let's hope I can help it a little.

The plot of ABCD is not that different from any number of "save the rec center" movies, except in this case it isn't a rec center, it's more of a dance/revenge film. Prabhu Deva stars as Vishnu, the disillusioned lead choreographer for Jehangir Dance Company, a powerhouse in the annual Dance Dil Se (The Heart Must Dance) TV competition. When his crew makes what should be a fatal error during the finals of the televised competition and wins anyway, he learns that his work is inconsequential as the contest has been rigged by the owner of his dance studio, Jehangir, played as a desi version of Snidely Whiplash by a scenery chewing Kay Kay Menon. Vishnu leaves JDC and eventually puts together a ragtag group of street dancers to compete against his former employers on the big show.

The first half of ABCD is pretty standard getting to know you bullshit. We get to see the assembly of the crew, some of their raw, unfinished dancing skills, some rivalry between the two dance crews Vishnu attempts to unite, and a whole lot of dancing, including an especially impressive dance/fight sequence during Ganesh Chathurthi. Yes, a dance fight. West Side Story eat your heart out! When JDC's lead dancer, Rhea, leaves the studio after the super creepy Jehangir puts the moves on her, she lands with Vishnu's crew and shit gets real. Rhea is played with remarkable adeptness by former So You Think You Can Dance contestant Lauren Gottlieb, who single-handedly doubled the Jewish population of India when she stepped on set, and kicks a whole lot of ass while not fucking up her Hindi dialogue too bad. I was impressed.

As fun as all of that stuff was, it really felt like watching a bunch of street kids pretending to dance for most of the pre-interval section of the film, that is, until the mighty Prabhu Deva has to step in and settle a dance duel in an underground dance off in which his crew get in over their heads. It is the only dancing that he does in the entire film, but this nearly ten-minute solo stretch is such an amazing feat of choreography and pure talent that it would be hard for anyone not to be jaw-droppingly impressed. It was somewhere around halfway through Deva's dance that ABCD became a real film, and holy shit, I bought it hook, line and sinker.

It isn't until the second half that the real conflict is set in motion and the characters begin to grow beyond their facades, but the film knows what it's doing and does it remarkably well. As the film progresses towards its inevitable showdown between Vishnu's dance company and JDC, we are introduced to a number of side conflicts and complications that make the film really work beyond its initial ambitions. They also help set up some of the more impressive dance sequences, including a rain-soaked performance for the ages. ABCD really sticks the landing, and delivers more of a solid dramatic experience than it has any right to.

The film isn't without its weaknesses, but even they contribute to the success of the film as entertainment. The Anglo who is brought in to replace Vishnu as JDC's choreographer is a walking, talking gay stereotype, and even he seems to be in on his own joke. Kay Kay Menon's megalomaniacal performance as Jehangir is mesmerizing and his inability to express emotion with subtlety really helps sell the monumental douchey-ness of his character. Beyond that, the main issues are really just nit-picking; the script and plot are derivative, but so are all dance films; the 3D isn't utilized to its full potential, unlike the recent Step Up films. No one really dances at the audience here. However, these are small issues in a big success story.

Anybody Can Dance 3D is a big winner and a huge success for everyone involved. I can see this film launching a few careers and perhaps igniting a new genre in Bollywood. While most big budget films feature plenty of dancing, relatively few make it the dramatic focus of the film, and future projects would do well to study ABCD to see how to do this right. While I'm still not sure that anybody can dance (I have two left feet), I'm damned sure that anybody with a yen for dance films will enjoy the hell out of Anybody Can Dance 3D!

More about Anybody Can Dance