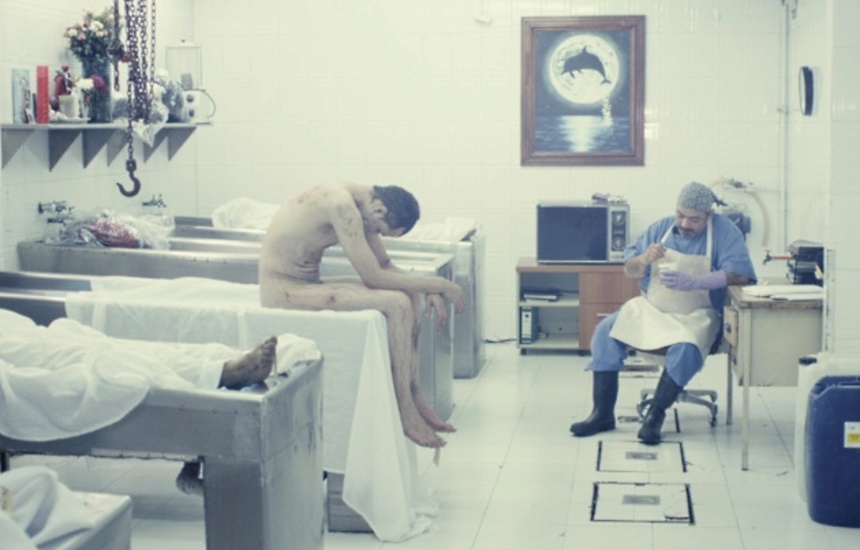 (For starters, they're so sloooo-ooow...)

While there weren't as many genre films at the International Film Festival Rotterdam as, say, ten years ago, this year it actually featured two new zombie films. Amazingly, both titles managed to bring something new to the table in this over-over-overused sub-genre: Frankenstein's Army was a Nazi-zombie-cyborg-fest, and from Mexico we got the reflective arthouse film Halley.

Beto is a security guard at a gym in Mexico City. A quiet, reclusive man, he keeps out of the way of other people. When he gets home, he spends most of his time grooming himself and keeping his apartment obsessively clean. Beto has a good reason for doing this: he's dead, a zombie, albeit with his mind intact. And he has been like that for a long time already.

But his loneliness increases, just as his ceaseless fights against rot and infection slow the deterioration of his body, but do not entirely stop it. What will Beto do? What CAN he do?

Halley starts with some extreme close-ups of blowflies in a jar, fighting each other or getting stuck in mucus. Next we see Beto sticking a small pair of scissors far up his nose to remove something. Both shots are done at a meticulously slow pace, sparing the viewer nothing. It sets the tone for the rest of the film, which can be summed up with two words: "slow" and "gross."

Not much happens in Halley but Beto's daily routine: at work; at a gym, watching people try to keep their bodies in shape; at home, trying to keep his corpse from falling apart. You see Beto inject embalming chemicals, rinse his cavities and wounds with toilet disinfectant, pull larvae and maggots from muscle tissue, and tape shut his biggest oozing wound. When he ventures to work, he covers himself with make-up and paint, while glasses hide his constantly discoloring eyes.

What Beto does NOT do is hunt people or eat them. He is entirely harmless, and during the few contacts he has during the film, he mostly stays quiet. People keep talking to him though, because he seems to be such a good listener, and here the film amusingly treads some of the same grounds as John Sayles' The Brother From Another Planet. But as the film proceeds, you see how Beto's condition automatically sets him more and more apart from living people.

The acting and make-up effects are excellent, if not 100% consistent in places, and the camera sticks to both the sterile interiors and the decay until the long takes almost suffocate. Make no mistake: although Halley is at times revolting, it is not a horror film. The focus here is on human drama, on losing your humanity, on body illness, and loneliness.

The movie's title comes from the famous comet which visits Earth once every 76 years. Most people will see Halley's comet only one time in their lives. But not Beto. For him, different rules apply, and if he keeps himself together (literally), he may see the comet several times. But in between visits, Halley's comet travels utterly alone, just like Beto, and utterly slow, just like the film.

You need to be very patient to get accustomed to the glacial pace set in Halley. While there is a difference between boring, sedate and meditative, director Sebastián Hofmann definitely takes his chances here. The great make-up work and claustrophobic setting mostly managed to keep me interested, though.

The audience in Rotterdam generally (and generously) went with sedate or meditative rather than boring, and awarded the film a very respectable 3.7 out of 5.