Blu-ray Review: THE WOODSMAN AND THE RAIN (Third Window) 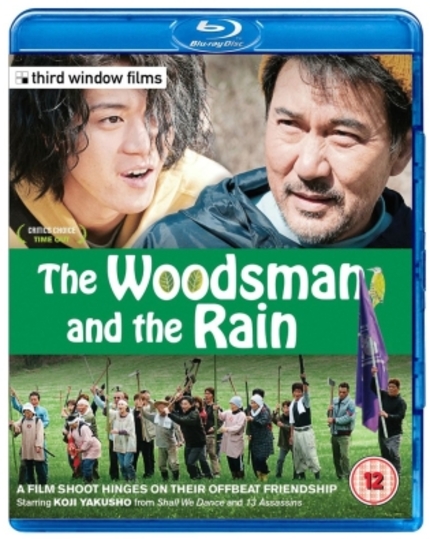 I now have the rare pleasure of having seen two coming-of-age comedy/drama films about young, insecure directors making zombie films from East Asia in the last 12 months. The first was Korea's Let Me Out, the story of a film school blowhard dared to put his money where his mouth is which I saw at Dallas IFF last year. The second, and inarguably the better of the two, is Okita Shuichi's The Woodsman and the Rain. The latter film has the distinct advantage of featuring the amazing Yakusho Koji in the lead role as the Woodsman of the title, but it's advantages go far beyond that.

While Let Me Out felt almost like a meta-exploration of the challenges of making a film from a director suffering through many of the same challenges, The Woodsman and the Rain is more of a contemplation of what makes us human, and just how we grow. Yakusho's lumberjack is a sad man, still hurting from the loss of his wife at an early age, when he finds himself embroiled in the production of this low budget undead feature by pure happenstance. His connection in the film world is the young, untested director of the film, played by Oguri Shun, who is less secure about his place in the world than the recently widowed Yakusho. While there is a lot of comedy derived from the film's production and the inevitable mishaps, this is a coming of age story for both men, and a beautiful one at that.

Our Christopher Bourne saw it at Japan Cuts last year and had this to say:

The Woodsman and the Rain, with a running time of over two hours, has a rambling, discursive quality and episodic structure that may seem to be too lengthy to sustain its premise, but in the confident hands of Okita and his co-screenwriter Fumio Moriya (Underwater Love), this proves to be much more of an asset than a liability. The grounded, unforced naturalism of the film's style, enhanced by the rustic beauty of its setting, as well as the believable sense of rapport in the interactions between the characters, lends the film a genial charm that becomes quite infectious. Koji Yakusho, as we have come to expect, gives his character a fully lived-in quality, and a gravity and multi-faceted approach to conveying a complete human life that seems effortless and is a beauty to watch. He interacts beautifully with all his co-stars, especially with the younger Oguri; old-school classicism and new-school indie sensibility combine in a riveting and satisfying fashion.

The Woodsman and the Rain is a joy, and it's great to see someone like Yakusho throwing in his lot with younger filmmakers these days. Sometimes it just takes a bit of confidence to get a film rolling in the right direction, and I'm sure that having international film star, Yakusho Koji, injected a little bit of oomph into director Okita's everyday existence. I really loved this film. Even though the combination of the plot synopsis and the two-hour-plus running time gave me pause, in the end it flew by and I'm glad to have such a warm experience in my memory banks. Definitely recommended.

Third Window's presentation of The Woodsman and the Rain is simple and effective. The film, itself, is not flashy, there are no big action sequences, no major CG, nothing like that, so the fact that the audio/visual experience was good enough for me to not notice any problems is satisfying. Looks great, sounds great.

The disc includes one major extra, an extended interview with the director and two leads shot for a TV program. This is an interesting piece that runs about half an hour and really helps to contextualize the film, as well as make me like Yakusho Koji as a person even more than I did initially. There are also a few deleted scenes included, but nothing that would've changed the film in a positive way for me. Overall, a solid, if not overflowing, package for a sweet little film.

The Woodsman and the Rain

More about The Woodsman and the Rain