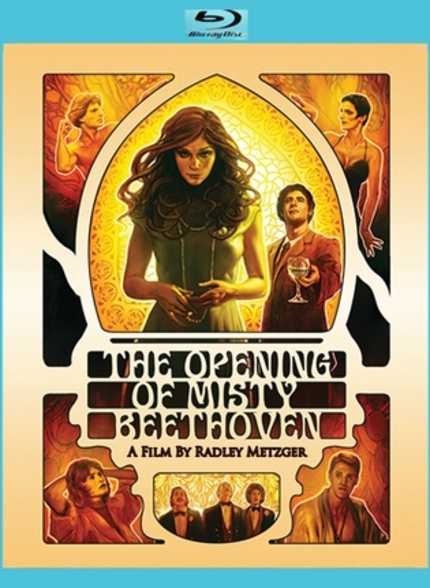 The 1970's were probably the most revolutionary decade of the modern era of cinema. Those ten years saw the invention of the blockbuster (Jaws), the introduction of the fan-friendly space opera (Star Wars), the emergence of the men who are, today, the grand old lads of the new Hollywood like Martin Scorsese, Francis Ford Coppola, Steven Spielberg and others, but that's only scratching the very bare surface of what was happening cinematically. Much of the real work to enlighten America and the world was being done just below the surface.

The seventies also saw the emergence of serious revolutionary art from the four corners of the world. More and more of this art was designed not only to push back against conservative values imposed by governments, but also to open up the world to an expanded sense of what humanity is. One aspect of humanity that had suffered the most at the hands of censors worldwide was sexuality, and while we all know that sex sells, it took a while for the idea to catch on in a literal way on the big screen. Decades of hiding behind double entendre and innuendo had left the conservative filmgoers somewhat confused about what the boundaries of their own sexuality could be, but the seventies changed that, almost.

The latter half of the sixties saw Metzger make a name for himself as the erotic auteur to beat. His sexy adaptations of both classic and contemporary works of literature found a larger audience than anyone could've imagined. His ability to combine light-hearted comedy with overt sexuality was, and probably still is, unmatched. His search for "production value" led him to shoot in Europe, where it was both less expensive to shoot and more beautiful at the same time. The results of this move across the sea are films like The Lickerish Quartet, a film about the sexual escapades of a group of hedonists living in a castle; and Camille 2000, an adaptation of the famous tale of Dumas' The Lady of the Camellias, set across the southern seas of Europe. This period in Metzger's career was incredibly fruitful, but like all good things, it couldn't last.

Neither Radley Metzger nor Henry Paris are strangers to the site, I've reviewed several of their films in the past, but 1975's The Opening of Misty Beethoven may be the most significant of all. This is the film that is widely accepted as the apex of adult filmmaking, the high water mark for adult films, and the point to which they'd never return as a form of popular entertainment. The Opening of Misty Beethoven is a film first and erotica second, but neither aspect suffers in the steady hands of Radley Metzger, the consummate pro.

The film is based on George Bernard Shaw's classic book, Pygmalion, which itself inspired the timeless musical, My Fair Lady. The story is simple, Dr. Seymour Love (played by adult film legend Jamie Gillis), a kind of sexual Svengali, finds a prostitute named Misty Beethoven (played by Constance Money) and places a bet with his friend Geraldine that he can turn young Miss Beethoven into the sexual talk of the town. Instead of studying diction, Misty will study dick, and lots of it. Dr. Love puts Misty through her paces as she experiments with all manner of sexual behavior, kink, and administration of pleasure. Much like Pygmalion, Dr. Love's Henry Higgins must give his project several test drives before he's ready to unveil her to the world, which leads to a number of interesting and varied sex scenes in which Misty performs admirably, even managing to turn a gay man straight, if only for the duration of their encounter.

These escapades are a source of pride for Dr. Love, as his Misty Beethoven project beings to pick up speed. As with all men who control others, Dr. Love's pride soon turns to arrogance, and, much like his literary antecedent, he says some things that rub Misty the wrong way, at which point the plot thickens. Misty begins to wonder just how much is left of the girl she once was whether or not all of this was worthwhile. The result is a compelling little piece of anti-romantic drama that draws upon all of the pair's experiences in creating a new story destined to continue long after the cameras stop rolling.

The Opening of Misty Beethoven is not only the finest adult film ever made, it's among the finest films of the seventies, full stop. Radley Metzger's ability to blend comedy with erotica was well documented by this point, but few of his films reach the romantic zenith of Misty Beethoven, and fewer play with real raw emotion in the way that this film does. For all of their bravado and sexual exploration, the majority of Metzger's catalog consists of films about freeing sexuality from emotion, whereas Misty Beethoven takes the long way around to reconnecting the two. In fact, it is really with his cycle of hardcore films, like The Private Afternoons of Pamela Mann, that Metzger really delivers this kind of emotional wallop that was largely shied away from in his softcore features.

As this film has been rediscovered over the last couple of months, primarily due to the dogged work of adult film distributor, Distribpix, it seems that the world of film aficionados is finally beginning to see the light about Metzger and the great wasted potential of adult films. There is a sadness that surrounds The Opening of Misty Beethoven, and that sadness follows the realization that films like this will likely never be made again with the kind of exposure they once had. For all of the stretching of the boundaries that occurred in the seventies in respect to what was acceptable, it was inevitable that those boundaries would snap back, and they did, hard. The combination of cheap video productions, as lamented in Boogie Nights, and conservative political and social values, as personified by Reagan's Meese Commission of the 1980's, have ensured that repression is once again the rage.

The Opening of Misty Beethoven comes to the market via a crowdfunded Blu-ray disc from Distribpix. The film has been newly restored from archival elements in both its hardcore and softcore versions, and both look incredible. The film has been painstakingly color-corrected frame-by-frame, as well as had dust and dirt manually removed in the same manner. The film is also available in its original aspect ratio for the first time since its theatrical release. The story behind the production of this disc is nearly as impressive as the disc itself, and it is well worth checking out Project Misty online if you get the urge. The audio, recorded separately from the image is also very good, Distribpix have created an optional 5.1 DTS-HD MA surround track that really envelopes you from time to time. This not being an action film (well, at least not THAT kind of action), the focus is largely on dialogue, and that all comes through loud and clear.

Distribpix worked closely with Radley Metzger in creating this disc, and the result is a remarkable set of extras that would give the mighty Criterion a run for their money. First up is a commentary with Radley Metzger, which he really seems to enjoy because nearly all of the presentations of his films in recent years, save The Image, feature them. Metzger is engaging and informative, and shows few signs of his age (he just passed 80). In addition to that, there is also a commentary from adult film legend and High Society publisher, Gloria Leonard. The disc also comes packed with hours of extras. There is a 45 minute documentary titled Behind the Scenes of Misty, which is as comprehensive a look behind the making of a single adult film as I've ever seen, including Inside Deep Throat, there are tributes to leading actors the late Jamie Gillis and Constance Money, there is an archival interview with Jamie Gillis, his last before his untimely death in 2010, an amazing 20 minute look at the restoration of Misty Beethoven, a pop-up style subtitle track full of tidbits regarding the film and performers, as well as dozens of pieces of ephemera such as trailers, posters, radio spots, outtakes, deleted scenes and more. If that weren't enough, there is a 60 page booklet absolutely crammed with history, behind the scenes stories, and "where are they now" essays from golden age adult film expert, Benson Hurst.

This is a monster of a release, and well worth the money. The film is an incredible document of a time when the future of cinema was still being formed, and it's funny as hell as well as touching. What more could you want? This gets my absolute highest recommendation. Buy it!

More about The Opening of Misty Beethoven

Damn you Charlie, I was SO not going to buy this but then I read your review...

Why wouldn't you buy this? It's basically the Citizen Kane of pr0n.

I totally agree with, and wholeheartedly share, your lamentations regarding the "death" of this brand of pornography. But as you point out, there is still amazing stuff out there to discover.

And, as you astutely pointed out, there is room for pornography in larger, more broad, film discussion! It is a viable genre with things to say.

Thanks for the kind words. I love reading your pieces on the subject in the magazine. I am bummed out that adult films have so marginalized themselves that it's hard for modern audiences to take them seriously.