The McConnaissence Continues with this Trailer for MUD 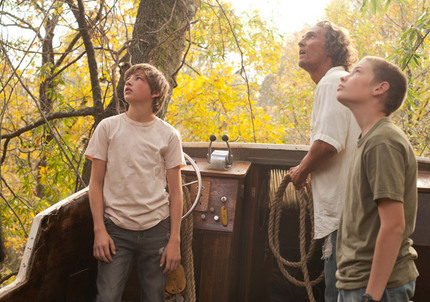 Wither has Jeff Nicols' Mud been since Nicols' well-received third feature debuted last year at the Cannes film festival?  Well, it has popped up on the docket at Sundance and to celebrate (or remind us) of what the film is, a new trailer was cut.

The suddenly ubiquitous Matthew McConaughey serves up another excellent performance as a man living in hiding in a boat on the bank of a river where he is discovered by two local kids,  one of whom bears an alarming resemblance to River Phoenix circa Stand By Me.

As is no surprise considering the upward trajectory between Nicols' Shotgun Stories and Take Shelter, this film looks fantastic.  Reese Witherspoon, Sam Shepard and the wonderful Joe Don Baker also appear in the film.  And looky there, one of the two kids (the one that doesn't look like River Pheonix) was one of the brothers in Tree of Life.
Mud gets its theatrical bow on April 26th.
Tweet Post Submit