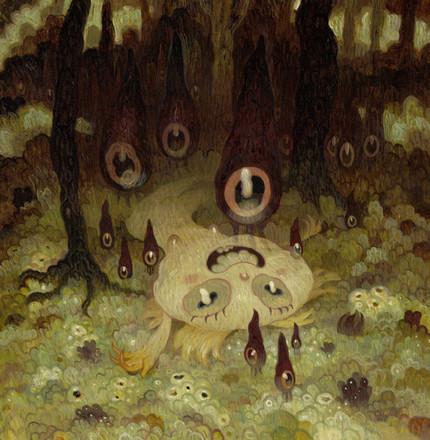 Cult comics fans and cult film fans alike, rejoice. For upcoming short film The Absence of Eddy Table is about to bring together one mighty compelling collection of talents. Producer Eric Vogel (Norwegian Ninja), director Rune Spaans (a key animator on Troll Hunter) and writer-designer Dave Cooper (the man behind cult comic titles Suckle, Weasel and Ripple) are coming together on new animated short The Absence Of Eddy Table.

Tordenfilm AS is thrilled to announce "The Absence of Eddy Table", an ambitious 3D animated short to be written and designed by Dave Cooper, directed by Rune Spaans and produced by Eric Vogel.

Following a grant by the Norwegian Film Institute of USD 289.000, the production has been greenlit with a goal of completion in late Fall of 2013.

The story concerns titular character Eddy Table, who one day gets lost in a dark forest. There he meets an alluring girl infected by a mysterious parasite. Love and violence ensues.

The Absence of Eddy Table was conceived by internationally acclaimed cartoonist and visual artist Dave Cooper ("Bent", "Ripple"). His paintings and comics will form the basis of the artistic expression and design of the project.

3D animation and graphic design veteran Rune Spaans ("Troll Hunter") will bring the story to the screen as director and lead artist.

Dave Cooper says: "Ultimately i hope that this film is authentic and true and original. I look forward to all of us making it that way and I look forward to embracing the flavour and character of Norway into my work."

Commissioning editor Åse Meyer at the Norwegian Film Institute says: "The Absence of Eddy Table has a distinct artistic ambition, and potential to become an exciting animated film both visually and thematically. The union of Spaans' animation and Cooper's story and designs can become a peculiar and original animated film which touches on existential and eternal themes like fear and love."

Producer Eric Vogel says: "This project brings together two amazing voices within the visual arts, to explore the boundaries of animation and good taste. This film will not be for the squeamish, but also sweet and heartfelt."

Do you feel this content is inappropriate or infringes upon your rights? Click here to report it, or see our DMCA policy.
animationdave coopereddy tablerune spaanstroll hunter

More about The Absense of Eddy Table