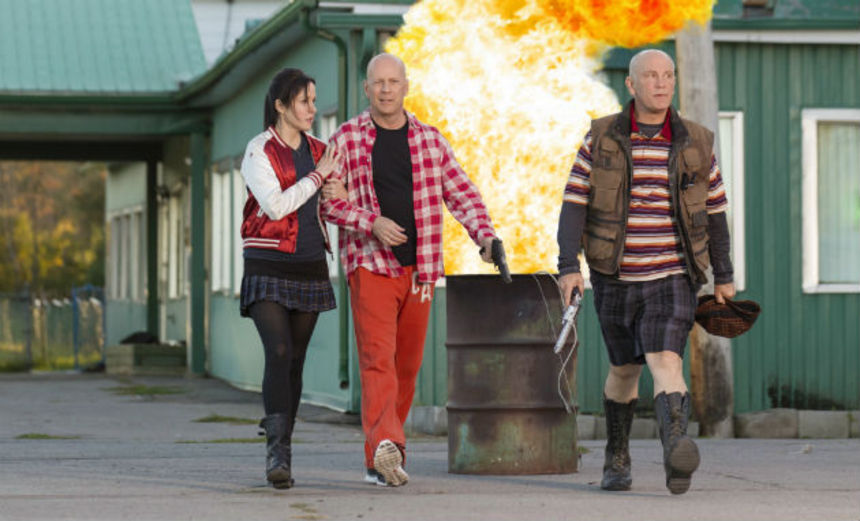 Bruce Willis smashes up Moscow in next month's A Good Day to Die Hard, and it looks like he'll do the same in RED 2, if the new trailer is any guide to go by.

"Good, breezy fun" is how I described 2010's RED, based on a three-issue comic book series by Warren Ellis and Cully Hammer. The story revolved around retired secret agent Frank Moses (Willis), who must go on the run when assassins come calling. He enlists the help of old comrades Helen Mirren, John Malkovich, and Morgan Freeman, all while romancing civilian Mary Louise Parker, who gets swept up in the case.

"If this all sounds like a safer, broader version of The Expandables," I wrote at the time, "that about nails it. Where RED stands on its own, it's in the robust flirtations between Willis and Parker, Malkovich hamming it up for all he's worth, and, most of all, the exquisite, iconic imagery of Helen Mirren firing a sub-machine gun."

The sequel brings back Willis, Parker, Mirren, and Malkovich, with Anthony Hopkins, Catherine Zeta-Jones and Byung Hun Lee added to the mix. Dean Parisot (Galaxy Quest) replaces Robert Schwentke in the director's chair; Jon Hoeber and Erich Hoeber once again wrote the screenplay. And, once again, old Frank and his team must face off against assassins, terrorists, and government officials; this time, they tear up Moscow, Paris, and London.

The new trailer looks like more of the same, which is not necessarily a bad thing with this type of silly popcorn fare. RED 2 is scheduled for North American release on August 2.