It's Adkins Versus Lundgren In Exclusive UNIVERSAL SOLDIER: DAY OF RECKONING Clip 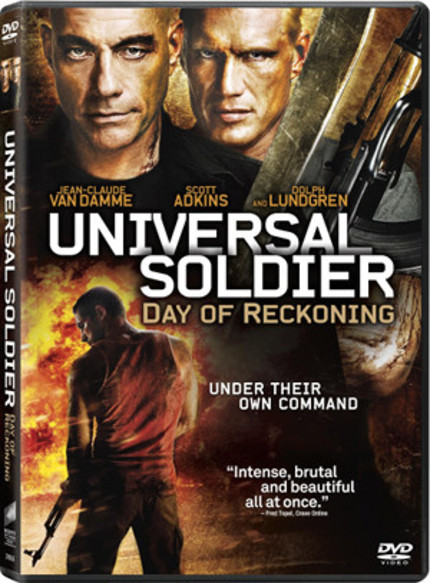 The latest installment of the Universal Soldier franchise hits home video January 22nd and ScreenAnarchy is proud to present an exclusive clip from the film, one that features a fight sequence between Scott Adkins and Dolph Lundgren.

Jean-Claude Van Damme, Scott Adkins, Andrei "The Pit Bull" Arlovski and Dolph Lundgren star in UNIVERSAL SOLDIER: DAY OF RECKONING, which ups the ante in the UNIVERSALSOLDIER series, giving you more hard-hitting, bloody, no-holds-barred fighting action. John (Adkins, The Expendables 2) wakes up from a coma after his wife and daughter were slaughtered in a brutal home invasion. Haunted by images of the attack, he vows to kill the man responsible, Luc Deveraux (Van Damme). While John tries to piece his reality back together, things get more complicated when he is pursued by a relentless UniSol (Arlovski). As John gets closer to Deveraux and the rouge army of genetically enhanced warriors led by back-from-the-dead leader Andrew Scott (Lundgren), John discovers more about himself and begins to call into question everything he believed to be true.