Charlize Theron To Giddyup In Seth MacFarlane's A MILLION WAYS TO DIE IN THE WEST? 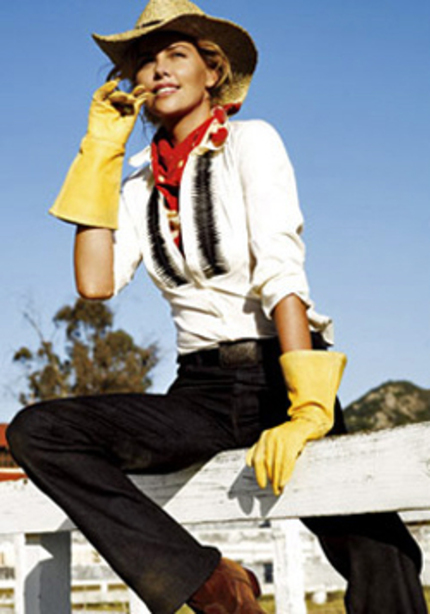 Insert Cowgirl joke here. Okay. Got that out of your system? Good. Moving on.
A report over at THR suggests that uber-everything, Charlize Theron, is in final negotiations to star opposite Family Guy creator Seth MacFarlane in a Blazing Saddles type comedy A Million Ways To Die In The West.

A Million Ways, which MacFarlane is starring in, directing and co-writing, is a Blazing Saddles-style comedy that follows a sheepish farmer who chickens out of a gunfight and sees his girlfriend leave him.

Then he meets the wife of a notorious outlaw who offers to teach him how to shoot, the farmer at first sees a chance to win back his love but slowly falls for the woman. Complications ensue when the outlaw returns and reclaims his woman.

The idea of Theron doing a Blazing Saddles type of comedy laced with MacFarlane's gift for the funny and profane tickles me so. I can imagine MacFarlane's voicemail after this deal is completed. "Hey, this is Seth, thanks for calling. I can't come to the phone right now. Charlize Theron is teaching me how to hold and shoot my pistol. Later we're going to do it holding real guns! Oh. And I'm going to kiss her. Over and over again. Leave a message after the beep you jealous bastards".

Do you feel this content is inappropriate or infringes upon your rights? Click here to report it, or see our DMCA policy.
a million ways to die in the westCharlize Theroncomedyseth macfarlanewestern