Weinberg Reviews IN OUR NATURE, a Low-Key Character Film That Rings True 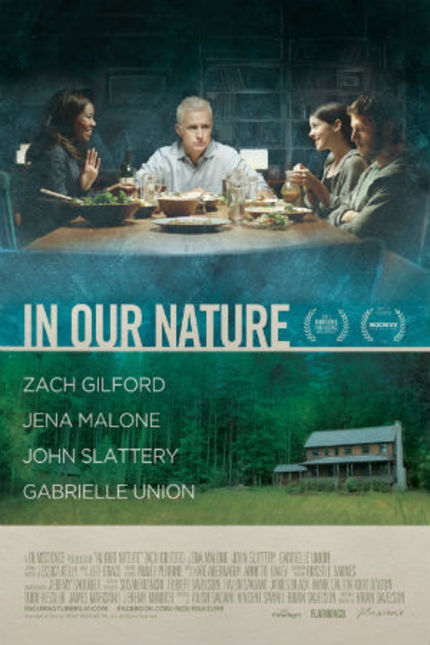 Sometimes you're just in the mood for a low-budget, four-character indie film in which a few flawed but very relatable folks deal with their low-key stresses, concerns, and issues in a way that, at the very least, rings true and, in the best cases, offers a viewer something that feels personal and familiar. The low-key but smoothly accessible In Our Nature is definitely one of those films. First-time writer/director Brian Savelson is interested in little more than presenting a story about a strained relationship between a father and his grown son, and how it begins to heal with some integral help from two very smart women.

Seth is a popular musician who brings his longtime girlfriend to the rarely-used family cabin. Their fun is interrupted when Seth's father unexpectedly pops up, and of course he's got a gorgeous new girlfriend on his arm. What sounds like a potentially goofy bedroom farce quickly settles into a quietly satisfying rhythm: John Slattery and Zach Gilford are excellent as the estranged father/son duo, and even when Savelson's screenplay wavers a bit too close to basic melodrama, both actors reel it in with some truly honest and un-flashy performances. Jena Malone is also quite good as Seth's free-spirited (but not ditzy) lover, and Gabrielle Union proves (once again) that she's much more than just a pretty face. She's saddled with perhaps the toughest role (the city girl who can't stand the outdoors), but the character never becomes overly screechy or unrealistic.

For all the snarky sarcasm and unpleasant bickering, there's a true sense of connection between the father and son, which means that even when the guys become petulant jerks, we can still empathize and sympathize because the "invisible wall" between fathers and sons is a pretty prevalent issue. In Our Nature is a film that approaches the story with an admirable sense of respect and restraint. If a few of the plot developments seem a little simple or predictable, Savelson earns some extra credit for closing things down with a finale that's earnest and hopeful and perhaps a touch bittersweet, but not saccharine or fake. So many "little dramas about people" fail to stick the landing, but In Our Nature does a fine job of it.

In Our Nature is hardly the most exciting or powerful indie film you'll see this year, but the movie earns high grades for allowing four strong actors to work their way through some basic but interesting obstacles that must of us can relate to in one way or another. If you happen to have a dad, boyfriend, girlfriend, or son, I mean.

In Our Nature is now playing at Cinema Village in New York City. It will open in Austin, Texas, on Friday, December 14. Check official site for more information.

Do you feel this content is inappropriate or infringes upon your rights? Click here to report it, or see our DMCA policy.
Brian SavelsonZach GilfordJena MaloneJohn SlatteryGabrielle UnionDrama