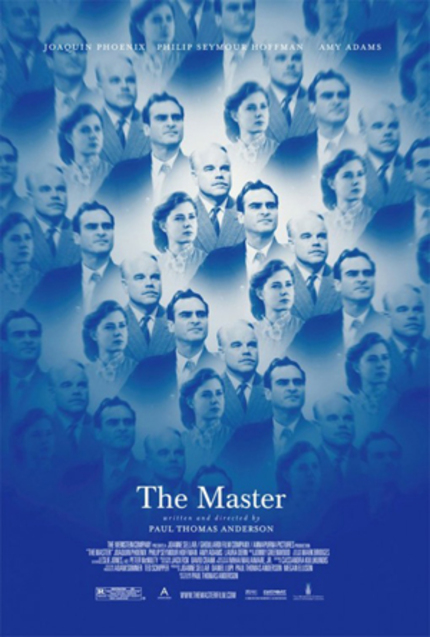 The Toronto Film Critics Association blessed Paul Thomas Anderson's film The Master with four awards this year. And three very different Canadian films have the chance to win the Rogers Best Canadian Film Award: Bestiaire, directed by Denis Côté; Goon, directed by Michael Dowse, and Stories We Tell, directed by Sarah Polley. That makes it two documentaries and a hockey movie that tapped into the Canadian psyche like a Maple tree at the end of Winter.
Other titles and acting talent familiar to ScreenAnarchy readers will also receive awards at the January 8th gala. See the full press release below to find out who they are.

TORONTO -- The Master, Paul Thomas Anderson's 70mm drama about a battle of wills between a ravaged war veteran and the cult leader who offers him a place at his right hand, dominated the 2012 awards of the Toronto Film Critics Association.

The awards were voted by the TFCA at a Dec. 16 meeting. The membership also chose the three finalists for the Rogers Best Canadian Film Award: Bestiaire, directed by Denis Côté; Goon, directed by Michael Dowse, and Stories We Tell, directed by Sarah Polley.

The 2012 TFCA Awards will be presented at a gala dinner at Toronto's Carlu on January 8, 2013, hosted by Cameron Bailey, Artistic Director of the Toronto International Film Festival. There the TFCA will also reveal the winner of the Rogers Best Canadian Film Award, which this year carries a record-setting $100,000 cash prize, now the richest arts award in the country. The runners-up will each receive $5,000. Don McKellar will present the award.

"The diversity of our three finalists for this extraordinary new prize show there's nothing predictable about Canadian cinema," said TFCA President Brian D. Johnson, film critic for Maclean's. "These are all genres we haven't seen before. Bestiaire is a visionary documentary from Montreal that explores our relationship to the animal world. Stories We Tell, a doc from Toronto, unfolds as a procedural home movie, investigating the filmmaker's family secrets; and Goon, shot largely in Winnipeg and set across the country, is a viciously funny comedy about hockey violence."

Canadian filmmakers were also honoured in the TFCA's other awards, with Stories We Tell winning the Allan King Documentary Award and Panos Cosmatos sharing the Best First Feature prize for Beyond the Black Rainbow with Benh Zeitlin's Beasts of the Southern Wild.

More details of the 16th annual TFCA awards, which were announced today:

Denis Lavant was named Best Actor for his complex performance as an actor assuming multiple roles for an unknown audience in Holy Motors.Rachel Weisz took Best Actress for her wrenching turn as a woman who follows her heart into an affair with a troubled veteran in Terence Davies' 1950's melodrama The Deep Blue Sea.Gina Gershon was named Best Supporting Actress for her ferocious performance in William Friedkin's Southern-fried noir comedy Killer Joe.ParaNorman, Chris Butler and Sam Fell's stop-motion horror comedy about a young boy trying to stop an uprising of ghouls in his accursed New England town, won Best Animated Feature.

(Under the TFCA's guidelines, contenders eligible for the awards include films released in Canada in 2012 plus films that qualify for the 2012 Oscars and have Canadian distribution scheduled by the end of February 2013.)

At the Jan. 8 gala, the TFCA will also present the Manulife Financial Student Film Award, which carries a $5,000 cash prize. It will be presented to a short film that the critics select from student entries submitted by film programs at Humber College, Ryerson University, SheridanCollege and York University.

At the gala, the TFCA will also announce the Jay Scott Prize for an emerging artist, sponsored by Deluxe, which will present a cheque for $5,000 and provide an equivalent value in post-production services.

The TFCA Awards gala will take place in the art-deco Round Room of the historic Carlu, with cuisine provided by chef Mark McEwan, whose career has ranged from the stellar kitchen of North 44 to his current role as head judge on TV's Top Chef Canada.

Do you feel this content is inappropriate or infringes upon your rights? Click here to report it, or see our DMCA policy.
awardsbestiairedenis cotegoonmichael dowsept andersonsarah polleystories we tellthe master