Ricky Gervais In Talks To Star In Next MUPPETS Movie 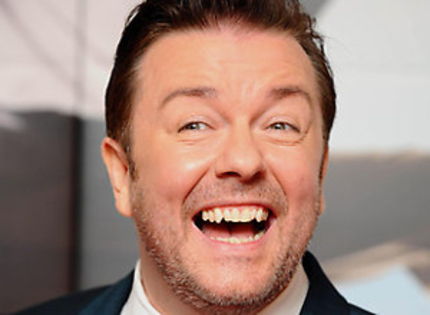 Sweet puppet justice may be just around the corner for British comedian and actor Ricky Gervais. Gervais filmed a cameo for the 2011 film The Muppets but it never made the final cut. Now Gervais finds himself in negotiations to fill the lead role, opposite Kermit, Piggy and Fozzie, in the follow-up film.

It only seems right that a familiar face to audiences from both sides of the pond take the lead. Gervais' roles in The Office, Extras, numerous cameos and notorious outings as host of the Golden Globes certainly make him no stranger to the viewing public. Nor will his addition make or break the film because we all know we do not go to a Muppets movie for the humans. No slight against Gervais - I think he is brilliant - but when you are watching a Muppet movie the humans are secondary.

The Euro-centric based story of the next film already has Ty Burrell (Modern Family) on board as a lazy Interpol agent. The last of the three main human roles is yet to be announced and with production starting in London next month it is only a matter of time before we find out who has that part. With comedic talents like Gervais and Burrell already on board whoever she may be will have her work cut out for her.
Tweet Post Submit

Do you feel this content is inappropriate or infringes upon your rights? Click here to report it, or see our DMCA policy.
comedypuppetsricky gervaisthe muppetsty burrell