Review: AMOUR, What's Not to Love? 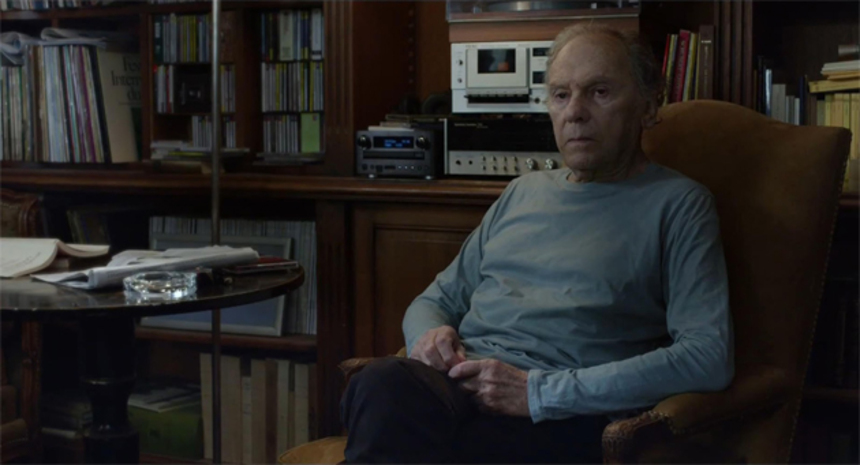 Michael Haneke wants to remind us all that we are going to die someday, and that the long day's journey into night is probably not going to be a pleasant one. He accomplishes this mightily in the heartbreaking, occasionally shocking, but always deliberate and restrained, Amour. From its single-shot intro, which shows the authorities discovering a neatly arranged corpse, to the the final shot of Isabelle Huppert sitting quietly in a sunlit parlour, this is the director at the absolute top of his craft delivering one of the best films of the year.
Is it manipulative and often unpleasant? Well, that has been the director's modus operandi for as long as I've been watching his films, but compared to, say, Lars von Trier, Haneke has (almost) always taken the high road of not overtly pushing buttons for the sake of a quick reaction from the audience. Rather, the Austrian auteur settles for a sense of slow inevitability; after finding any love, comfort or reassurance, things are going to get worse.
Consider the epilogue to The White Ribbon, where all that has happened will be the generation who become the Nazis in 15 short years, or the menacing near-static shots in Cache or poor Susanne Lothar (or Naomi Watts if you prefer the English-language version) struggling for many, many minutes with their unfortunate bondage in Funny Games.
With Amour he charts the decline in heath of cultured and feisty septuagenarian Anne (richly performed by Emmanuelle Riva) and the strain on the relationship with her longtime loving husband Jean-Louis Trintignant (easily vying for the best performance of year). That Haneke takes what can often be a cloying sentimentality (On Golden Pond) or guilt laden misery-fest (Away From Her) and first de-sensitizes it of show-grief or treacle, then turns it into a full blown horror film on every level, is nothing short of astonishing and every bit worthy of it's Cannes Palm D'Or.
Haneke has found his niche and gets better at it with each film. That everyone can relate at some level to the suffering death of a family member is going to destroy both the brave and the curious, the aged and the young in whatever audience it finds. This is not an easy movie to watch unless you view it only from a craft perspective. Even watching it with most of the Toronto press corps (on the eve of the 2012 Toronto film festival), there was a fair share of sniffling, and rubbing of eyes. Whether it was empathy for what was up on screen, or the reminder that this is probably in store for many, will remain in the privacy of the mind of each viewer.
After a wonderful evening of watching one of her former piano students perform on the stage of the Théâtre des Champs Elysées, Anne and her husband Georges settle back into their usual routine of cooking and eating breakfast early the next day. This is sharply (and strangely) interrupted by Anne having a minor stroke. With an unpleasant and largely futile hospital experience behind them, Anne asks Georges to promise she never goes back. George being rather heroic in his devotion to his wife, even as she lashed out at him for her own crippled state, agrees, but then (as do we) has to bear witness to the long slow descent into complete mental and physical decrepitude.
Anne remains full of spunk, even as she is subjected to a daily routine: the shortening and combing of her tangled hair, adult diapers, and creams rubbed into her back to prevent bedsores. Nurses of varying skill and care help Georges embrace what is very much a full-time job. The strain of watching his wife decline back to infantile state (in a very much adult body) is painful, especial as Haneke reminds us of all the love and promise of their relationship.

Things are not helped by his fifty-something daughter, Eva (Isabelle Huppert), who has her own state of pressures, anxieties and emotional baggage. An early conversation between George and Eva plays more like a man visiting his shrink than a father-daughter heart-to-heart. After the stroke, they quarrel fiercely about medical and well being of Anne; her emotional and confused, him icy and logical.
Anne is usually in the other room, not wanting her state to be witnessed by anyone outside of Georges, least of all Eva or her former student Andre (she cannot even listen to a Schubert concerto anymore, although the director lets it play on the soundtrack often for us.)  Anne is seen constantly gripping some sort of stress ball with her claw-like hand; her dying is painful and stressful in every way, as eventually she can only lie there in pain and wait for it to happen. The few happy moments in the film, whether from old photographs, afternoon daydreams, or a temporary increase in Anne's mobility via technology, only serve as small peaks of joy to provide a vantage point to see just how far the slide into the abyss is below.
One wonders if this will become a genre of films as the Boomer generation marches forward into the collective health-care system. And really, if it becomes some sort of grim sub-genre, then Haneke has already made the definitive entry into it. When you hear Roy Batty ask his creator for "more life, fucker," you may wonder if the angel-like Batty wants to enter a frail dotage, or in the words of the Kurgan, "It's better to burn out than to fade away!" The pop culture industry has always been in the business of romanticizing death of the young, from Bonnie & Clyde to Jimmi Hendrix to Marilyn Monroe.

Leave it to Haneke, as close to a successor to Kubrick as we have these days -- OK, P.T. Anderson aside -- to essay the reverse in such a compelling and powerful fashion. At one point in the film, George chases a pigeon out of his apartment, the bird having snuck through an open window when nobody was looking. This symbol has often represented an impending death in the household.  Later, the pigeon sneaks back in, and George has a lengthy chase trying to capture it with a blanket. The scene is lengthy, and maybe even a bit excessive, but it nevertheless is an absurd and precise reminder that we're all going to die, even if we go on the merry chase to keep our house free of birdshit.
(Review originally published in slightly different form during the Toronto International Film Festival in September 2012. Amour opens in limited release in the U.S. on Wednesday, December 19.)