DVD and Blu-ray Review: SHIKI Aims to Creep You Out With An Army of Bloodsuckers 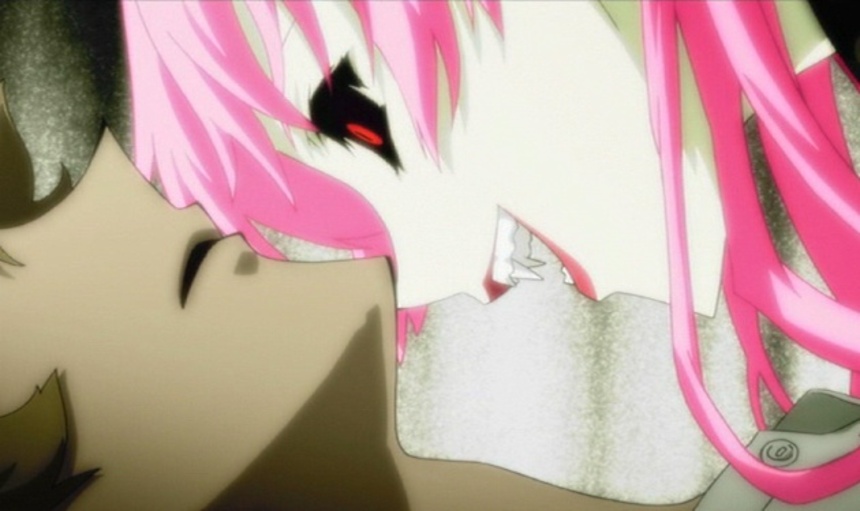 (Brief description: it's like Stephen King's Salem's Lot done as an anime, but done BLOODY well!!)

Both Funimation in the US and Siren Visual in Australia have recently released Shiki on Blu-ray and DVD. Here in Europe, Manga UK is following suit, albeit just on DVD for now, with the first half for sale right now while the second half arrives next week. And if you are into creepy horror I very much recommend you check it out, wherever you are.

Shiki a very stylized Japanese animated horror series which owes a thing or two-hundred to European vampire lore.
Vampires are quite possible the most overused subject in horror and even when you just look at anime you can see plenty of them already. Funnily enough most Japanese reworkings of the vampire myth seem to know this and immediately branch out into adolescent action, apocalyptic science fiction or ridiculously baroque fantasy and tend to emphasize big monsters and big guns.

Not so with Shiki, a series which aims to creep you out with a procedural, almost documentary look at how a small secluded village gets slowly but surely taken over and consumed from within by a covert (but growing) army of bloodsuckers.

Being a Blu-ray fanatic I went with the Siren Visual release, but all editions worldwide should be more-or-less similar. I've already said this anime is worth checking out so I could conclude my review right there, but let me elaborate.

It's a hot summer in the secluded rural village of Sotoba, where everything is fine if a bit TOO rustic for some of the younger inhabitants. But suddenly more people start dying than can be considered normal, to the point where local doctor Toshio considers the possibility of a new lethal epidemic disease.

When his research fails to come up with an explanation and some of the recent dead turn out to be rather ehm... restless, Toshio is forced to acknowledge a weirder truth: Sotoba seems to be suffering from an attack by vampires. Worse, the undead have infiltrated the local bureaucracy already and have altered records to hide their existence.

Meanwhile, the population of Sotoba has to cope with an exponentially rising death-toll. How are you expected to react when a deceased loved one you grieved for re-appears? And what do the vampires actually have in mind for the village?

Just when you think nobody should ever dare use ye olde Transylvanian-style vampires as a plot device anymore, something like Shiki arrives: a story that plays with the overused legend so well that it is astonishingly successful. This is particularly impressive because it doesn't do anything special with vampirism. Well, apart from taking it seriously, that is.

It doesn't seem to be doing that at the start though: while backgrounds look beautiful and realistic, the artwork for the characters is gaudy and ridiculously stylized. Some of the people in Sotoba sport hairdos which look more supernatural than the undead do (check that nurse with the green hair) and when the first vampires show themselves, they look as baroque as anything out of a Castlevania videogame. Not a good start if you want to try and make things scary.

But it DOES become scary, starting with being damn creepy. Director Amino Tetsurō knows that NOT showing something can be the scariest thing of all and uses that knowledge expertly. Example: one of the high school students in the series gets stalked by a girl from his classes, to the point where he closes his curtains at night lest she watch him from behind the trees in the nearby forest. When she dies early on in the series he is shocked, but he also thinks he can finally leave the curtains open. Soon ... a creepy feeling makes him shut them regardless. And you see him staring at the curtains at night, thinking there is something behind them, still watching him ... Would you dare open those curtains to see if there are actually glowing eyes behind them?

This creepiness is done so well, with such an impending sense of dread, that the atmosphere easily wins out over the abstract (at times silly) artwork.

And in Shiki this becomes common: instead of jump scares and gory artwork, emotions and mood are used to get under your skin. Whenever someone dies you see the impact on relatives. Over time, you see families literally driven mad with grief over lost loved ones. The 22-episode series takes ages to get the plot going, and the first dead person doesn't rise for several episodes. But all of this time is well-spent to set up the central characters, who try to make sense of their vague feelings of unease.

When the protagonists finally do figure out what's up, they each already have a load of emotional baggage which prevents them from working together, and they all seem doomed regardless of what they will try to do. Doctor Toshio tries to find a scientific solution, but the man's utter lack of empathy with his staff and patients make him hard to root for. The same goes for the priest Seishin, who does have empathy but is almost paralyzed by his own philosophy. Rebellious teenager Natsuno is closest to a regular anime hero, albeit a very reluctant and powerless one.

It's hard for me to explain why I loved this anime without giving away specific plot details, so I will have to be somewhat vague in this regard. Suffice to say that it contains one of the biggest 'fuck you' moments I experienced this year in a narrative. There is a twist somewhere, so heinous and so logical in hindsight that it made me guffaw once the penny had dropped.

A word of warning though: while Shiki doesn't rely on gore to scare you, it uses it remarkably well to shock at times. Some of the most revolting acts in the series come not from the vampires, but from scared, angry people taking desperate measures and overdoing it. There are several moments which mimic known wartime atrocities and these make for some powerfully uneasy viewing. By that time the characters have become too compelling to stop watching though, so ... you endure and feel tainted afterwards. And that's an achievement.

When it starts, Shiki looks gaudy, over-the-top and ridiculous, but its story soon gets under your skin. The vampiric premise may seem tired but by focusing on emotions like dread, grief and despair (rather than cheap scares or monsters), studio Daume has managed to create a series which is at times truly disturbing and very original.

Often creepy and sometimes even shocking, Shiki made an impact on me and therefore comes highly recommended

This review is for the release by Siren Visual, who kindly provided me with screeners. I was a bit surprised that they were the ones releasing this instead of Madman, but then again Shiki was originally broadcast in Fuji TV's noitaminA slot, so it actually fits right in with the rest of Siren Visual's catalogue. Shiki has been released on DVD and Blu-ray, and while the quality of the DVD edition is good, the Blu-ray edition can only be described as stellar. Note that the DVD is PAL coded for region 4 only, but the Blu-ray can actually be played in both region A and B. The biggest and perhaps only difference between the Australian Blu-ray and the American one is that, as usual with Siren Visual, it defaults to a Japanese soundtrack (True-HD 2.0) although the English one (True-HD 5.1) is there as well. English subs are included and these are excellent.

Here is a funny thing about the visual quality. Siren Visual sent me a DVD screener as well as a Blu-ray, and the one time I accidentally put in the DVD, it took me a full episode to notice my mistake, as I was totally absorbed in the story. In fact, it was the pixellated subs that gave it away, so that does say something about the quality of the DVD as well.

But let there be no misunderstanding here: I may have temporarily mistaken the DVD for a Blu-ray, but I could never have mistaken the Blu-ray image for a DVD. The HD transfer is fantastically sharp, ungodly so if I allow myself a quip. The shifts between wild and subtle color palettes is done justice, and there is special trickery in places like fine grain, as if you're watching 35mm film stock, which does not stand out on DVD but shines on the Blu-ray. This is one to watch in HD if given half the chance, it's demo material even and very much worth shelling out the extra dough for.

Worthy of note is that Shiki actually gained two "OVA" episodes when it was released on DVD and Blu-ray in Japan, one fitting between episode 20 and 21 and the other fitting between episode 21 and 22. They aren't exactly filler: both tie up many of the loose ends and show what happened to supporting characters. In fact, these two contain some of the best parts of the series and are tough to watch due to the emotional wallop they pack.
And the good news is: both of these episodes are included in this set as well, neatly fitted in the list as episode 20.5 and 21.5, and don't need to be specially selected.

As for extras: several episodes have commentaries attached, done by the US voice cast. While I'm not that interested in the English soundtrack, the commentaries are pretty nice: the actors know a lot about anime, each having voiced several series, and there are a lot of interesting details to get from these talks. You also get the Shiki adverts from Fuji Television and clean (meaning textless) versions of the two opening credits and the two closing credits.

All in all this is a very good release for a very good series. The DVD edition is very much recommended and the Blu-ray definitely even more so. 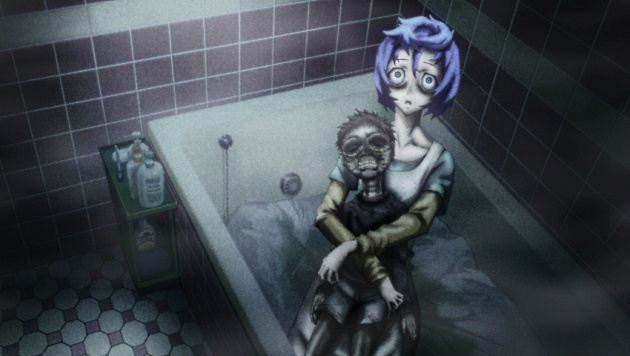