JFF Review: DREAMS FOR SALE Has Lingering Thoughts On Humanity 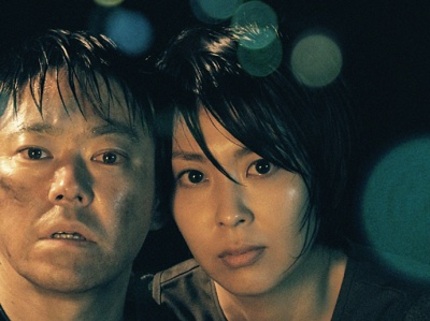 I caught Dreams for Sale as part of the fantastic lineup of the Japanese Film Festival in Melbourne (and other places in Australia). I feel compelled to write about it as it has stayed with me since viewing it.

There is a spectre haunting Japan. Miwa Nishikawa's tragic and foreboding Dreams for Sale begins with this invisible force, affecting the lives of seemingly unrelated people in distressing ways before settling on a busy scene in a restaurant; a stable business co-owned by a young idealistic couple. Moments later, through sheer misfortune and human error the restaurant is decimated by an accidental fire; their reputation in ruins, their dreams up in smoke.

Propelled by extreme stress and cynicism, they concoct a strange plan to rebuild their shattered finances; marrying the husband off to a series of lonely women and defrauding them to reach their goal of establishing another restaurant business.

The wife is initially an optimist, she gets a job far beneath her at a junk food ramen joint. The husband paces about, unsure of what to do next, complaining and hating his wife for her chipper attitude. It is his absence of purpose that is highlighted here - was he ever in it to begin with? He is a pessimist, and although the world is harsh and unforgiving it is his values that lead him to perform desperate acts to appease his wife. He is in denial and in this futile and hopeless time hurts his wife more than he knows.

With their relationship stretched to breaking point, the wife almost becomes another person. Driven, calculated and cold as ice she uses her husband, exploiting fate as they become employed in various up-scale restaurants and the husband puts on a long-term act to win the affections of lonely women, eventually leaving them and disappearing from their lives, with their money in his pockets.

Dreams for Sale is a languid anthology; the strangers in the beginning enter the lives of the protagonists for better or worse as guilt and depression peak, and their decisions lead to their descent. These twisted illogical cons continue until there is nothing left for the couple, but what then? This cruel intentions game can only logically go on for so long before the mask slips and cracks show. The extreme lack of empathy the couple show leads to hypocrisy and messy muddled decisions and the 'dreams' of both the protagonists and the other inhabitants of Tokyo intersect in devastating ways.

So what then is the price of a dream? It is better to ask what is the cost of a dream - humanity is in this case - as modern day Japan is scrutinized to an unbearably painful level and there are no innocents left to answer for this tragic behaviour.

Dreams for Sale is incredibly well-acted, with the two protagonists as husband and wife giving an extremely complex performance reminiscent of the dysfunction in Ryosuke Hashiguchi's 2008 drama All Around Us. The locations explore the seedy business side of Tokyo and the illusory upper-class establishments that people with real problems frequent, and are often exploited by. The score is menacing and beautiful and accompanies the difficult nature of each scene. The ending is truly poetic, ironic and just and brings together the repercussions of this sordid climb to normality that never really exists to begin with.

Dreams for Sale is an incredible film about human nature in the face of dire circumstances in a modern cold and distanced world full of lonely bodies to exploit. This film may break your soul.

Do you feel this content is inappropriate or infringes upon your rights? Click here to report it, or see our DMCA policy.
Miwa NishikawaYûsuke IseyaTakako MatsuTeruyuki KagawaKôichi OhoriCrimeDrama