SAIFF 2012 Review: VALLEY OF SAINTS, In The Heart Of Darkness There Is Light 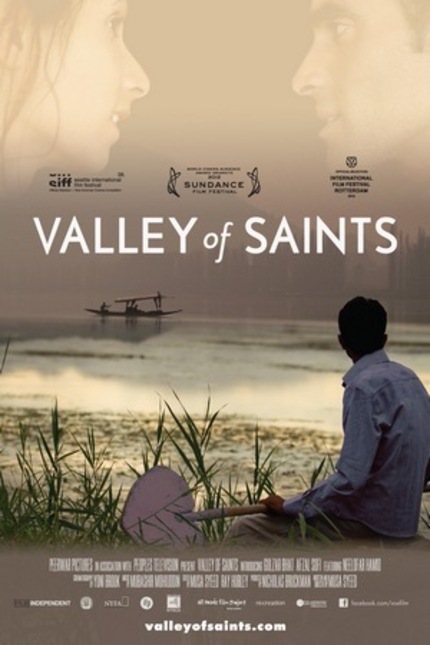 In the northwest of India, there is a mountainous region known as Kashmir. For decades dominion over this region has been a matter of dispute between India and Pakistan. The terrain is very harsh in many places, making it difficult to identify any lines of demarcation.
As a result of this uncertainty, Kashmir has also become one of the most dangerous parts of India; constantly under threat from terrorists, mired in perpetual instability, and sects on either side of the official border insistent that they are being robbed of their land. It is industrially underdeveloped, politically unstable, and constantly besieged by one threat or another.

It is in this darkness and mire that the story of Musa Syeed's Valley of Saints unfolds. Specifically, the story takes place on Dal Lake, one of the most beautiful areas in the obscenely beautiful Kashmiri region. This is the home of Gulzar, a young man who lives with his elderly uncle and makes his living as a boatsman on the lake giving tours to foreigners. One day Gulzar and his friend, Fazal, decide that it is time to move on from Dal Lake. It has nothing to offer them anymore; they fear the same stagnation that most young adults fear at some point in their lives. If they don't leave now, they feel that they never will.

When their attempt to flee is scuttled by an increasingly harsh military situation and daytime curfew, Gulzar meets a female scientist researching the deteriorating state of the lake and is struck by a naive kind of puppy love. He pines for the scientist, Asifa, at the expense of his friendship with Afzar, at which point their shared exodus begins to look more and more like an unattainable dream. Over the next few weeks, Gulzar, Afzar, and Asifa will learn what really matters to them, and that it's not where you are, it's who you are and who you are with.

Dal Lake, the picturesque locale that provides the backdrop for Valley of Saints, is legendarily beautiful, however, like many environments all over the world and especially in India, it is in danger of dying due to overpopulation. The juxtaposition of the beauty of the lake from one angle when compared to the ugliness of its pollution and overuse is a wonderful metaphor for the ideas explored in Valley of Saints. Even in this place where there is no peace, there seems to be no future, and every day is wrought with existential challenges, there is beauty. This beauty requires an open heart to find, and it is from that place that Gulzar ultimately is able to draw strength.

Valley of Saints is very light on dialogue and relatively light on plot. The film runs only 82 minutes, and yet it still manages to immerse the viewer in the beauty not only of its locales, but also the beauty of stillness that emanates from the lake. This is where the beauty is allowed to emerge on its own, without prodding, without flash, and without pretense. It is in the stillness of Dal Lake, Gulzar, and Asifa that we are able to find beauty in this story of an ugly time. Kashmir, almost in defiance of the danger that surrounds it, is a beautiful place, and Musa Syeed has captured that with remarkable patience and love in a way that will certainly transform the way I think of Kashmir when I hear it mentioned on the news.

The Lotus flower is one of the symbols of beauty and purity in the Eastern religions that dominate Indian spiritual life. Among the properties of the Lotus is the fact that it often originates from mud and from the most dire of environments. The fact that this beautiful flower, which is the symbol of all that is good in the world, comes from the dregs of the lake is the perfect analogy to for this story and the love that bursts forth from the lake in a time of great pain and strife. Musa Syeed and his small cast deserve a lot of credit for turning what could have been a painfully slow film into a transformative experience, making me feel I'm a better human for having watched the movie.

Valley of Saints plays the rescheduled closing night of the South Asian International Film Festival on Saturday, November 17 at 9:00 at the School of Visual Arts Theatre. Find more details from the link below.

Do you feel this content is inappropriate or infringes upon your rights? Click here to report it, or see our DMCA policy.
Musa SyeedMohammed AfzalGulzar Ahmed BhatNeelofar HamidDrama

More about Valley of Saints