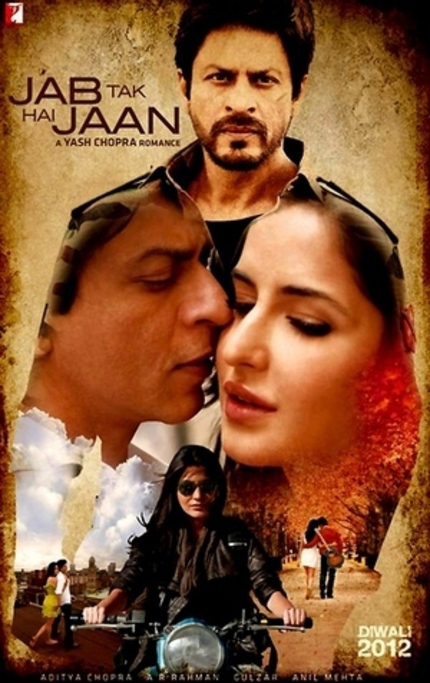 It's difficult to talk about Jab Tak Hai Jaan without putting it in its proper context. Not only is the the final film of one of Bollywood's most beloved auteurs, and the author of the modern romantic cinema in which so much of India still revels, Yash Chopra, it's also the latest film from one of the Hindi film industry's biggest stars, Shah Rukh Khan. It couldn't be lugging around heavier baggage. There is the temptation to sentimentalize about Chopra's career and allow that feeling to seep into any kind of critical response to the film, a reaction to which I may not even find myself immune, however, Jab Tak Hai Jaan delivers exactly as it is supposed to on all levels, and that's not too shabby for a film with so much expectation to live up to.

The story line of Jab Tak Hai Jaan is not at all easy to compress. The film is 176 minutes long, which is even long by Bollywood standards these days, and Chopra uses all of that time to expand a ten year long love story to its emotional acme, leaving audiences drained by the time the credits roll. We've been up, we've been down, we've seen fire and we've seen rain, and by the time the film closes out with a behind the scenes montage of Yashji on set working on his final project, it's just the topper that put me over the edge and threw me into emotional freefall. Yes, I fell for this film and I fell hard.

What I find most amazing about Jab Tak Hai Jaan is that the entire time I was watching it I was picking it apart, but in the end it resonates more deeply that it perhaps deserves. Aditya Chopra's script is ridiculous. Coming from the man who penned and directed the defining film of modern Indian romantic cinema, Dilwale Dulhania Le Jayenge, the script for Jab Tak Hai Jaan is something of an embarrassment. Characters act in ludicrous ways right from the word go, insane coincidences determine every single plot turn in the story, and every few minutes I found myself thinking "what the f..." at the things going on in front of me; not least of which is a pivotal scene in which London Police allow a civilian Shah Rukh Khan to defuse a bomb on a commuter train just because he seems to know what he's talking about.

Scenes like that pepper the film, and if it weren't bad enough that they are there at all, sometimes they play major roles in the narrative. There's nothing lazier than dropping unlikely (or downright impossible) plot devices into a film just because there's seemingly no other way to move the story forward. Adi Chopra should know this, and his dad, Yash Chopra himself, should have questioned it. Neither of these guys are rookies, they've been around, and there are some seriously amateur-hour antics in Jab Tak Hai Jaan. That being said, the film doesn't completely collapse like the house of cards that it is, instead it is saved by an unusually strong performance from Shah Rukh Khan as our lovelorn lead, Samar Anand, and a bouncy and rousing performance from Anushka Sharma, who is quickly becoming one of my favorite mainstream actresses simply for the energy she brings to every role.

SRK's Samar begins the film as a take no prisoners leader of an Indian Army bomb disposal unit. He doesn't wear protective gear, and he's obviously never made a mistake because he's still alive and in one piece. He's introduced via a particularly ham-handed piece of expository dialogue between two nobodies who dutifully inform the viewer that he's defused 97 bombs and is known as "The Man Who Cannot Die". However, as one would expect in a film like there, there is some underlying pathos behind his devil-may-care approach to his very dangerous job. Leave it to the inquisitive Akira (Anushka Sharma) to uncover his history via an accidentally pilfered diary which leads into a ninety minute flash back explaining his tragic love story with a woman named Meera played by Bollywood coat rack, Katrina Kaif.

Akira, our deus ex machina, interferes with Samar in order to both get his story out of him and get him to fall in love with her. As one should expect at this point, it all backfires and Akira winds up in love with the emotionally unavailable Samar, which makes them a perfectly tragic Bollywood couple. A few more twists, turns, and unlikely coincidences occur, and we're left with a whirlwind of a final hour, which cannot be revealed without giving up major spoilers. Suffice it to say, the plot kind of spirals out of control around the 150 minute mark, and as a result, the ending feels very rushed, even though we've already had two and a half hours to resolve the story. Instead of smooth transitions from one element to the next, the film nearly heads off of a cliff in the final reel while trying to tie up loose ends.

The bottom line is this: if you like Bollywood melodrama, Jab Tak Hai Jaan may be the film for you. I do, and so the above mentioned faults, major though they might be, are merely bumps in the road that don't derail my emotional investment in the film. I'll admit that I giggled a few times at some particularly hokey dialogue, and I couldn't help laughing every time I saw an Indian Army solider haphazardly waving a rifle around pointing at nothing in particular when he was supposed to be on patrol, but it was all in good fun. Yash Chopra was never one to make subtle films, and his history, dare I say mastery, of bombast is unparalleled in Bollywood. Just when you think a moment has reached its emotional peak, leave it to Yashji to throw in a couple more corkers just to make sure he wrings every last tear from your poor dehydrated carcass, and I'll be goddamned if it didn't work on my more than once.

It's been about eight years since Yashji's last film, the cross-border interfaith romance Veer-Zaara, but it's been even longer since the man who pioneered Bollywood's obsession with picturesque European locations actually set a film in one. In fact, apart from a few moments here and there, I can't even remember one with a major location outside of India. As such, Chopra's view of London in 2012 seems firmly stuck in the '90s Hindi film aesthetic of the west. Sure, he updates the morality to that of modern Indian twenty something's by allowing Anushka Sharma's Akira to speak freely about sex and wanting to fuck guys with different accents and showing in unusually forthright detail the illicit sex lives of Samar and Meera, but the settings look like never left the late '90s.

Yash Chopra was never one to shy away from hot button items. Whether it was infidelity in the Amitabh Bachchan starring Silsila, stalkers in the masterful Darr, also featuring SRK, or the interminable divide between India and its mortal enemy, Pakistan, in Veer-Zaara, Chopra was always keen to give the audience something to chew on, and I think that in spite of the updating of sexual mores in Jab Tak Hai Jaan, he plays it rather safe with the content. Sure, the plot has plenty of twists and turns and doesn't shy away from the occasional kiss on the lips from SRK (who hasn't done that in a film in as long as I can remember), but there's little universal about the story, it is all very contained, which I guess isn't necessarily a bad thing.

I had read several tweets and off-the-cuff reactions to the film before walking into the theater so I was prepared for the worst. I'll be honest, even upon immediately leaving the auditorium, I was rather dubious about the whole experience. However, the more distance I put between myself and the nit picky things that bothered be about Jab Tak Hai Jaan, the less they bother me. Ultimately what I came away with, after all nits have been picked, is a deeply resonant emotional experience helped by an incredibly strong performance by a movie star who actually shows some acting chops for the first time in a while. Jab Tak Hai Jaan is by no stretch Yash Chopra's finest work, however, it is a fine coda to a long career spent giving the people what they want, which is a little bit of everything and a lot of tragic romance.