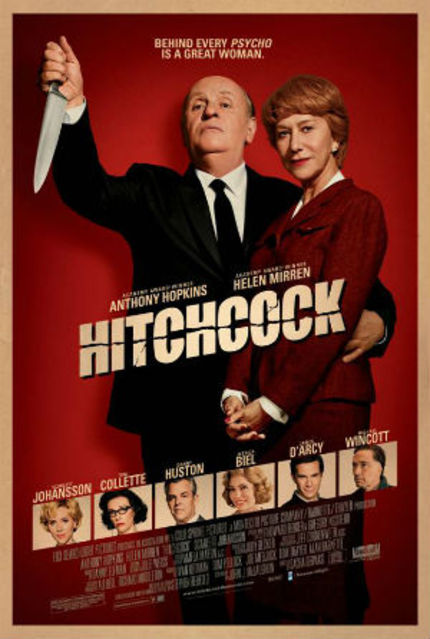 Shamelessly shallow, Sacha Gervasi's brisk romantic trifle Hitchcock starts with a kernel of truth and blows it up into a bucketful of popcorn entertainment, albeit of the arthouse variety. Featuring a sterling inhabitation by Helen Mirren and a suggestive portrayal by Anthony Hopkins, the film never pretends to be more than it is: a chalk outline of a man's life.

Hitchcock is at its best whenever Mirren and Hopkins share the screen. They carry a large amount of baggage with them, but it's barely perceptible as they each slip into their roles. Mirren has the easier task, since her character, based on the real-life screenwriter and producer Alma Reville, is much less known, while Hopkins must shoulder the impossible burden of playing director Alfred Hitchcock, one of the most popular filmmakers in history, and perhaps the one who cut the most distinctive figure.

Hopkins puts on the padding and the makeup and replicates the rhythms of Hitchcock's deliberate speech and gives a strong enough impression to fool the public from a distance. Mirren, freed of that particular responsibility, isolates the steely strength within Alma's reserved yet warm and loving personality. Mirren and Hopkins have fabulous chemistry together, so that we never doubt that they have been married for a very long time; in this world, Alma and Alfred have developed a nearly-telepathic shorthand expressed in clipped phrases, deep sighs, and intimate glances and glares. They complement one another, though that doesn't mean they entirely understand the other.

Unfortunately, each actor is saddled with fictional plot strands that are, assumedly, intended to convey internal crisis. Alma pays a great deal of attention to family friend Whitfield Cook (Danny Huston) on a screenwriting project, provoking Hitch's jealousy; Hitch is visited by Ed Gein (Michael Wincott), the real-life murderer whose exploits provided the spark of inspiration for Robert Bloch's novel Psycho; the imaginary visits give the director pause about the morbid side of his curiosity.

In view of an opening scene that finds Hopkins as Hitchcock breaking the fourth wall and talking directly to the audience, a la his duties as host for his late 50s TV series Alfred Hitchcock Presents, the case can easily be made that director Sacha Gervasi and screenwriter John McLaughlin have constructed Hitchcock as a two-part episode of the TV series. This also fits with a suggestion made by Lew Wasserman (Michael Stuhlbarg), Hitch's agent, that the movie version of Psycho might end up as a two-part episode on the TV show.

With this thesis in mind, it's difficult to take Hitchcock too seriously, even as it plays fast and loose with facts that are generally known, much less those in the ostensible source material, Stephen Rebello's non-fiction book Alfred Hitchcock and the Making of Psycho. The movie ends up de-mythologizing the great director, giving the impression that he spent as much time perving on women as he did in marketing and showmanship, worrying about his public image, and, you know, planning and shooting his movies.

But it also supports the notion that, whatever his faults, he was a fabulous filmmaker, one who was (mostly) respected by his cast and crew. What it brings that is absolutely new to the table, as far as the general moviegoing public is concerned, is that his accomplishments were not his alone. As much as it flies in the face of what many people (mistakenly) believe to be the auteur theory, Hitchcock argues that Alma Reville deserved far more credit and attention than she received during her lifetime.

The supporting cast is well-chosen, with strong turns by Scarlett Johansson as Janet Leigh and Jessica Biel as Vera Miles, as well as sharp impressions made by Kurtwood Smith, Richard Portnow, Toni Collette, and James D'Arcy. Danny Elfman's musical score complements the incredible original compositions of Bernard Herrmann, and Jeff Cronenweth's photography is a signature achievement.

Hitchcock appears to have been aimed at a limited audience, namely, those who are familiar with the Master of Suspense and his 1960 classic, but not overly so. Having those goals in mind, the film succeeds splendidly, racing through its 98-minute running time with grace and efficiency -- and without breaking a sweat. The chief accomplishment of the film, thanks especially to Helen Mirren, is that it makes Alma Reville the star of a movie for which she would never have taken credit.

The film opens in New York and Los Angeles on Friday, November 23, before expanding in limited release across the U.S. in the coming weeks.