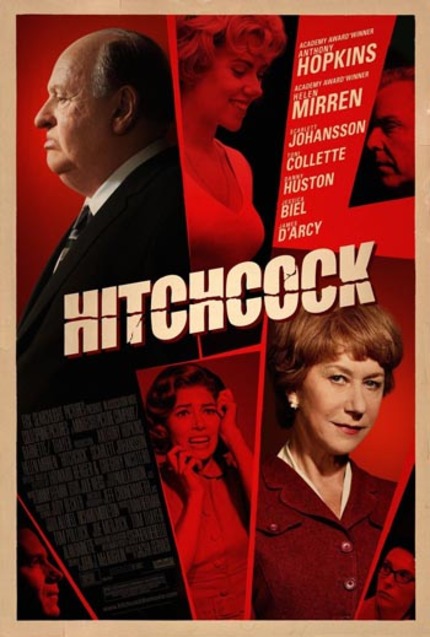 AFI Fest 2012 got off to a rousing start last night with the packed world premiere of Hitchcock. Set amidst the director's filming of Psycho, the movie focuses on both his personal and professional challenges, painting an intimate portrait of the man behind the legend. Anthony Hopkins stars as 'Hitch' with a generous helping of prosthetics that give the man his emblematic bulk. Hopkins's transformation into Hitchcock is remarkable even if his mannerisms do a skew a bit close to the caricature line at times; never quite crossing it, however. On the other hand, Helen Mirren's performance as Hitch's wife and partner Alma is flawless. Hers seems the biggest lock for awards season recognition.

The truly remarkable story behind Hitchcock the movie is how expertly directed the film is by a first time dramatic director. Much praise is due for Sacha Gervasi, who up to this point has just one feature documentary under his belt (albeit one of the best docus in recent memory, Anvil: The Story of Anvil) and a handful of produced screenplays (including Spielberg's The Terminal). That The Montecito Picture Company took a chance on Gervasi shows admirable foresight as the director delivered an expertly crafted film that avoids the trappings of melodrama to tell an interesting and actually quite fun story about a historical figure of enormous weight.

Hitchcock screened as the Opening Night Gala at the 2012 AFI Fest. It opens in limited theaters from Fox Searchlight on November 23. ScreenAnarchy will have an in-depth review of the film soon.