Have Your Say: SKYFALL Spoiled? 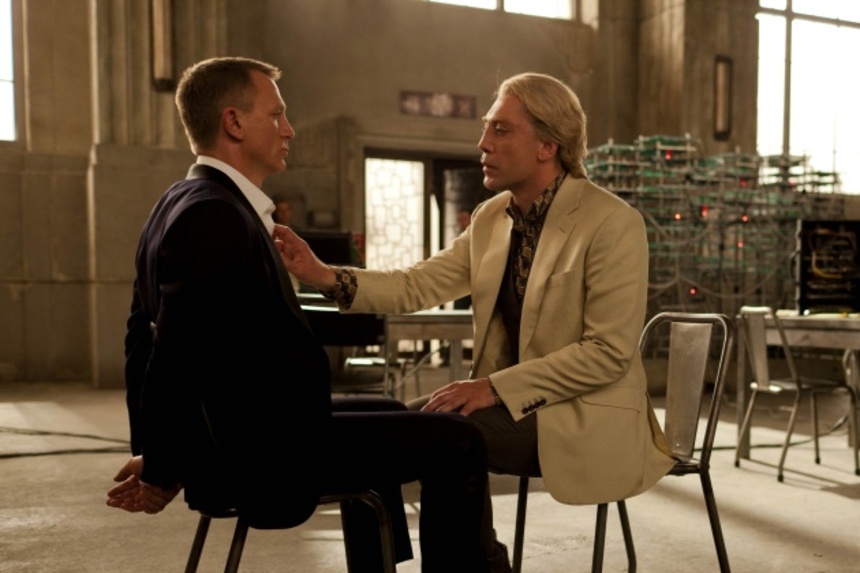 The teaser trailers of several James Bond movies in the past featured the tagline "Bond Is Back", yet for few it would be so fitting a sentence as it is for Skyfall. Wherever it premieres it thunders through the multiplexes with all the mass of a financial mastodon, gathering money and leaving people smiling. Because the general consensus is that people are very happy with Skyfall. At the moment it has even entered the IMDB Top-250 list.

Bond is back indeed and delivering the goods, in such a way that some feel the film is above criticism. It makes for a striking difference with other Bond films in general, which tend to exist somewhere BELOW criticism. Who cares about plot and acting in a Bond film? Many Bond films are like sketch comedies, consisting of separate highlights grouped together by something which only bears a mere resemblance to a storyline. The whole franchise has basically survived on delivering outings into its own glamorous universe, where just the thinnest strands of logic are needed to be able to get to the next titillating babe, the next jawdropping stunt or the next funny gadget.

But there are exceptions scattered throughout the first four decades of the franchise, and nowadays the rebooted Bonds with Daniel Craig use a different tactic.
Skyfall is a nice example of this: the film is almost entirely character-driven, relying on the palbable tension and fireworks that show whenever two of the leads lock horns, instead of depending upon stunts and explosions. This is especially true for the film's last two hours (!), making this more a thriller than a fun action flick.

A more mature Bond fighting a more mature villain is a good thing of course and a joy to behold. But being a thriller also means that Skyfall cannot easily be forgiven for the usual Bond story gaps. In For Your Eyes Only we have a parrot expertly repeating a strand of conversation which turns out to be the only lead to the villain's stronghold. That was a Roger Moore Bond film and as such it could get away which such cringe-inducing sillyness. Skyfall, less so.

Which is why I'm going to list a few of my pet peeves here which took me out of the film and which prevent Skyfall from making my Top-10 list for 2012 next month.

WARNING: There Will Be Spoilers!
To be able to go into detail I have to do some hardcore spoilering here. I will try to avoid it where possible, but if you do want to go into the film fresh, do not read any further. And that goes for the comments as well. So here goes: things that didn't stop nagging me throughout the film.


1: James Bond has all the evidence, and sits on it until someone starts to kill scores of his colleagues.

The film starts with a list which is stolen, a list containing all MI6 agents working undercover in terrorist organisations. When these people's identities are later revealed one by one by the villain, they are executed. Bond thankfully is on the case, identifying the list's thief and tracking him down in days.

Unfortunately, the only piece of evidence he uses is something he has kept to himself during his extended holiday. Way to go Bond! You could have prevented the entire villain's plan from the outset just by showing up two weeks earlier with that bullet.

Of course, nobody chides him for it throughout the entire film. They chide him for everything else, but not about the fact that his timely debriefing would have saved everyone.


2: James Bond has a plan. It involves giving the enemy everything he wants. On a fucking plate.

I could argue that most of the villain's plans depend on several things he could not possibly predict, but that would be nitpicking. After all, there is plenty of fun to be had with Silva giving Bond and MI6 the runaround so I'll let it slide for serving a purpose. And Bond's final solution to the cat-and-mouse game is a pretty good one: he lures Silva to a secluded area that is better known to Bond than to the villain. A place where there are no computer networks or easy access to information, so Silva cannot use his formidable hacking skills. Here Bond will supposedly have a better chance to protect M and defeat her enemy.

So to be on the safe side, Bond kidnaps M and prepares to fight the big fight when the enemy comes to get her. And he's armed with... with... ehm. Well, there are two septagenarians willing to fight the army with virtually no weapons except booby-traps.

And one of the two elderly is the one person who should not be allowed to get hurt: M herself. Good plan, Bond? You lure the enemy to this barren valley and despite the presence of secret tunnels and stuff, you try to keep her out of harm's way by putting her in the only two buildings there? Silva doesn't really need a computer to figure out where she is...


3: Kincade has a flashlight and is not afraid to use it.

Picture this: Bond has blown up the building which had M hidden in it. Silva is outside, devastated. M is either dead or has safely disappeared, and Silva is in the middle of nowhere with most of his army decimated and his ride reduced to ashes
.
And you can see it in his face: this was not supposed to have happened, this is a man defeated, cheated out of the revenge he had so meticulously planned. If M is somewhere out there, where can she be? Darkness surrounds him except for the blazing remnants of the building. Nothing can be seen in the hills...

But what is this? A flicker of light in the distance? Salvation! Let's go check it out!

Look, I can see the need to have a final ehm... final. A last face-off between all leads. But for crying out loud, couldn't they have thought up a more elegant way to get there?

Bond's increasingly asinine plan has M being hidden in what is now the ONLY remaining building in the entire valley. And to make sure Silva knows where she is, Bond's groundskeeper Kincade gallantly flicks on his flashlight to show M the way.

Mull that one over for a second. This is not Rowan Atkinson in a cameo, this is Bond's very capable groundskeeper who has been tending the valley for decades, someone who we've been told can blindly find his way there. And he doesn't even need a flashlight, as the whole place is lit up perfectly by the huge pyre in the center which used to be the main building.

So back to Silva looking around in desperation. Hey, what's that in the distance? Two old people on the hillside with a flashlight going to the chapel. Hmmm, might be worth checking out...

To add insult to injury, Silva then proceeds to use the landscape against Bond, and the chapel has not been boobytrapped. Increasingly incapable Kincade is even caught without a weapon as he brings M a blanket. Boo!

Bond lives to Die Another Day and ends the film where most of the others start: getting briefed by (a new) M for a mission. And we can happily anticipate another Bond adventure, hopefully soon.

So... wait. Why isn't he in jail? He kidnapped the old M and got her killed!
I'd have loved to see that debriefing.


Again: I did not HATE Skyfall, in fact I loved most of it. But the callous disregard for cause-and-effect spoiled it for me in no uncertain way
.
Do you agree? Disagree? Am I a snob for not loving the film entirely? Am I too easy on it?
HAVE YOUR SAY!!