Blu-ray Review: SAFTEY NOT GUARANTEED, But Then, What Is? 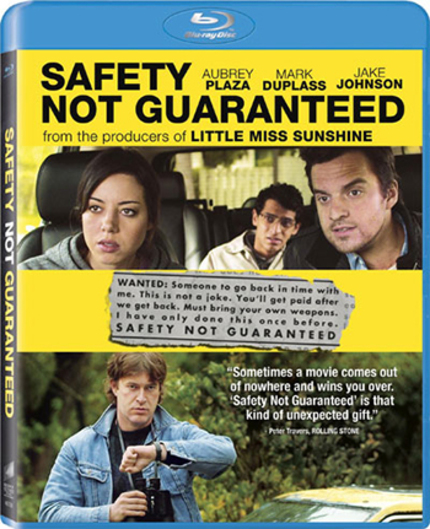 I'm more or less with the prevailing opinion around these parts when it comes to director Colin Trevorrow's time travel comedy debut Safety Not Guaranteed, inasmuch as I found it inoffensive, and fitfully amusing largely because of lead actress Aubrey Plaza, the cute-mean Parks and Recreation and Funny People actress. It is a pleasure to see the actress turning inside out that sardonic persona she's leaned on for most of her onscreen career, and if there's one definable pleasure, it's seeing her sweetness and vulnerability for the first time.

The broadly drawn but still personable characters will pull you in, but with this kind of "is the hero crazy or isn't he" premise, there's really only so far you can go, particularly in the indie romantic comedy confines where Safety Not Guaranteed lives so comfortably. Peter Martin articulated as much in his June review:

The humor is silly, broad, and varied; mostly it consists of one-liners delivered in a familiar, deadpan rhythm: boom, chicka-chicka boom, seasoned by visual jokes and carefully-observed, well-timed facial reactions. Some of it erupts, no doubt, from familiarity with the performers; if you've watched Parks and Recreation and/or New Girl during the past U.S. broadcast television season(s), then you've been indoctrinated into the sly style of humor practiced by Plaza and Johnson; if you've seen any other movie in which Duplass has acted, you can pretty much anticipate his every move.

What happened with the picture quality here, Sony? For the most part, Safety Not Guaranteed is presented with serviceable, if not acceptable picture quality, but for about one minute (yeah, I know, it's not a lot, but still) the image is a disaster, a compressed, smeared mess. It's hard to imagine anyone letting this pass, but here it is.

In lieu of commentary, director Colin Trevorrow is onhand for "A Movie Making Mission" (15:16, HD), where he's front and center talking about making the movie around star Aubrey Plaza as well as the casting and performance/character dynamics of the film, making a convincing case for Safety Not Guaranteed as a deconstruction of Plaza's brittle TV and film persona.

"The Ad Behind the Movie" (02:19) features writer John Silviera discussing the origins of the ad at the heart of the film's premise which originally began as the opening of a novel.

If you're looking for the film's theatrical trailer, you're out of luck.

Safety Not Guaranteed is available on DVD, Blu-ray, and VOD from Sony Home Pictures Entertainment.

Do you feel this content is inappropriate or infringes upon your rights? Click here to report it, or see our DMCA policy.
Colin TrevorrowDerek ConnollyAubrey PlazaLauren CarlosBasil HarrisMary Lynn RajskubComedyDramaRomance

More about Safety Not Guaranteed