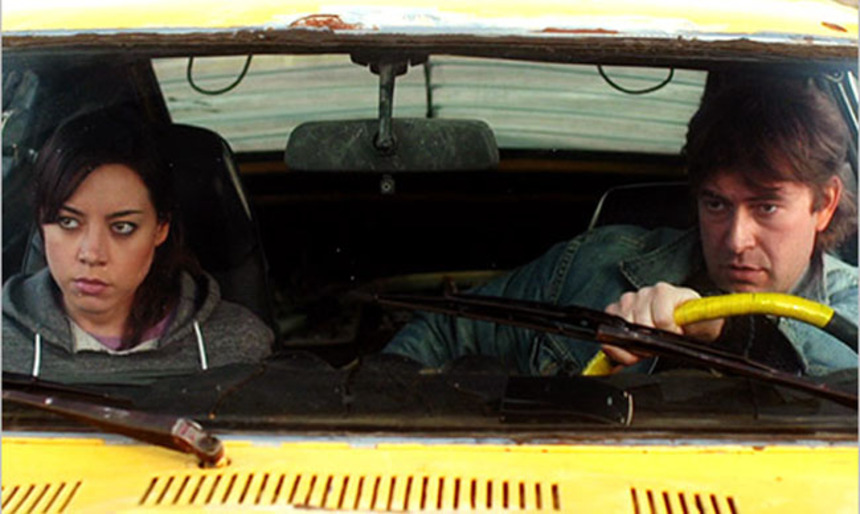 Safety Not Guaranteed is the feature film debut of director Colin Trevorrow and writer Derek Connolly. It stars Aubrey Plaza as Darius Britt, a new writer at a local magazine. She is sent out with her boss and a fellow staff writer to track down a man named Kenneth Calloway, played by Mark Duplass. Calloway posted an ad in the classifieds that simply said, "WANTED: Somebody to go back in time with me. This is not a joke. You'll get paid after we get back. Must bring your own weapons. Safety not guaranteed. I have only done this once before." The editor at the magazine where Darius works thinks this may make for an interesting story and before you know it, Darius finds herself out in the middle of nowhere, sharing a bed with her boss played by Jake Johnson to save money, while they find the guy and figure out what's going on.

The film is ostensibly a fairly broad comedy that has Darius being one of the only "normal" people around, while everyone else seems over the top and a little crazy. The sense of humor is fairly broad and the situations throughout are rather farcical. The movie certainly has it's more touching moments, but by and large, it is simply a lot of fun. Duplass plays the (probably totally) crazy guy in a very nuanced way - he is both vulnerable and opinionated at the same time. He is sweet but also constantly on edge and that edge keeps him fascinating to observe. Johnson's performance is mostly comical, but even he gets a few chances to open up emotionally as he goes through his own journey back in time - in his case, via nostalgia.

The crux of the plot is the question, "Is Kenneth Calloway completely crazy, or is it possibly that he's actually invented a real time machine?" and the film is at it's best when it opens up either possibility of being true. Unfortunately, most of the time, all hints point towards him being totally crazy and this diminishes the fun of the guessing game. While the ending may surprise you, the journey there doesn't maintain the question with enough evidence on either side to keep one rooting for either outcome. Still, the movie is full of laughs and well executed scenes that make this a fun, easy watch.

Do you feel this content is inappropriate or infringes upon your rights? Click here to report it, or see our DMCA policy.
Colin TrevorrowDerek ConnollyAubrey PlazaLauren CarlosBasil HarrisMary Lynn RajskubComedyDramaRomance

More about Safety Not Guaranteed