Blu-ray Review: INCREDIBLY EVER AFTER aka MR & MRS INCREDIBLE (FUNimation) 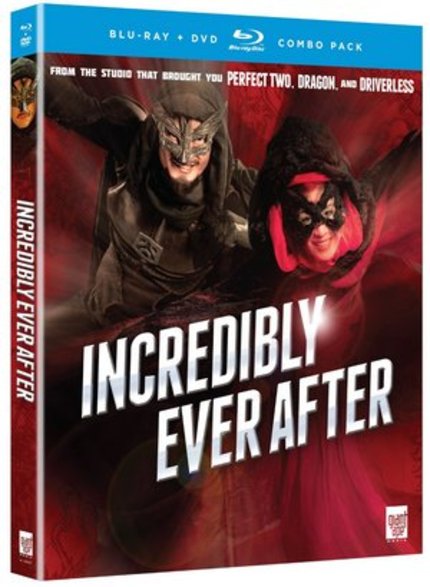 Most people either love or hate Louis Koo. The current star of many medium budget Hong Kong potboilers has a rather unimpressive aura about him that doesn't necessarily distinguish him from other performers. However, he somehow manages to make his way into a really great movie every once in a while, much to everyone's surprise.
Sandra Ng is not all that different in this regard. She, too, has made her way on to the big screen more often than one might think over the last decade. But her last real standout performance came in either 2004's Perhaps Love or 2003's Men Suddenly in Black. So what happens when you smash together these two relatively unengaging performers and try to wrap a wacky superhero action comedy around them? Well, not much.

Incredibly Ever After, FUNimation's retitling of Mr. & Mrs. Incredible, is a goofball romp that shoots all over the place tonally and in terms of plot without a whole lot of focus. However, let me be straight with you, I don't always find that to be a bad thing. I like goofball romps, and Incredibly Ever After had "Josh" written all over it!  Remember, I'm the guy who really enjoyed City Under Siege. However, this film's lack of commitment to any particular style really proves to be its downfall, which is unfortunate because I was really looking forward to it. It's not awful, and least not in the kind of way you'd expect, it's just meandering, and the last thing a film like this needs is extra frames. The film goes on for about fifteen minutes too long, and unfortunately all of those minutes are slapped onto the end in a climactic battle that really has very little to do with anything and feels really patched together.

Mr. & Mrs. Incredible are a wedded couple with a secret past; once upon a time they were the Gazer Warrior and Aroma Woman (it's less disgusting than it sounds). These days they've settled down to a normal life in a small village, trying to put their heroic pasts behind them. However, when they decide it's time to have a baby, they seem to be having a bit of trouble. When the local doctor suggests that they might need to spice up their lives in order to get the juices flowing again, the masks and capes come back out, and it's time to take down some evildoers in the name of Gazer Warrior and Aroma Woman!

The film starts off quite abruptly, without any introduction to the characters, which is more than a little awkward. This is not the type of film I would expect to work well while beginning in media res, and it doesn't. Soon enough, it becomes clear who is who and what is going on, but the lengthy flashback sequence they haphazardly throw into the middle chunk of the film would've been better observed at the opening to try to gain some sympathy for the characters. Instead, we're thrown right into some minor marital discord with unsympathetic characters and expected to laugh it off. Not very charming.

Don't get me wrong, Incredibly Ever After does have it's bright spots. There are a handful of  really fun scenes, mostly those that are detached from the very loose narrative. There is a Super Mario Brothers inspired rooftop chase, a wire fu back rub, and some cheeky double entendre, and I enjoyed all of that. However, I think the problem is that there just wasn't enough of that stuff, there was too much story thrown in and it looks like it was all just afterthought.
The real bummer of the film is that they decide to introduce a supervillain in the final reel and it just doesn't click. We've had no connection to this character previous to this last few minutes, and so when he becomes this big overwhelming obstacle, you just don't care. It's really sloppy writing, and it reeks of someone attempting to follow a screenwriting handbook, rather than following the natural flow of the film.

For all of the shortcomings of the film, FUNimation has done a great job with the A/V presentation. The image is clean and sharp with very bright, stylized colors and no print damamge at all. The Dolby TrueHD track is similarly flawless, and the sound field is constantly buzzing with some kind of aural effect or other. Really good stuff from FUNimation. All told, I didn't notice any problems on the part of the presentation, all of my issues were with the content.

For a film as jam packed with FX as this one, you'd think they'd have some kind of behind the scenes footage, but unfortunately, we get nothing but four themed teasers. Granted, the teasers are all very clever and not your usual promotional stuff, but, hey, only total out to seven minutes of footage, so either way it's a bit disappointing.

In conclusion, I suppose I liked Incredibly Ever After, but it's a budget release for me. I can't imagine paying what Amazon are asking right now (~$25), but for $10, I'd pick it up.

Do you feel this content is inappropriate or infringes upon your rights? Click here to report it, or see our DMCA policy.
Vincent KokMin Hun FungLouis KooZhang WenSandra Kwan Yue NgChapman ToActionComedyRomance

More about Mr And Mrs Incredible