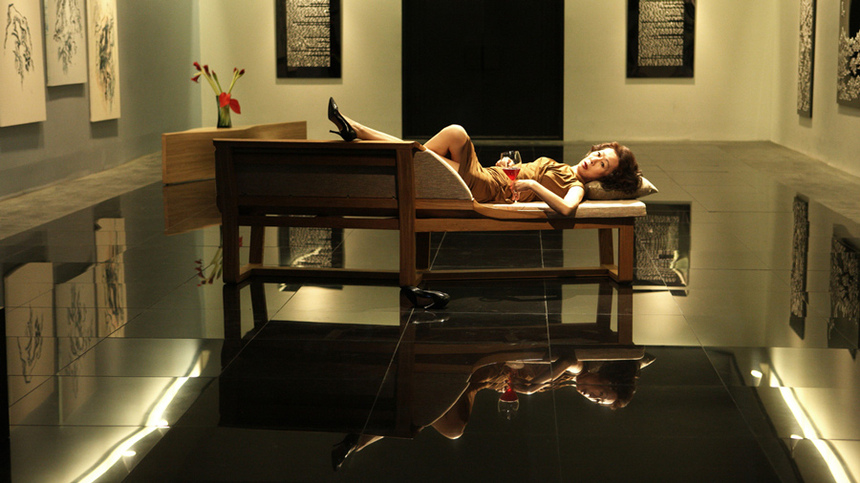 The film starts out strong, with the head of one of the richest families in Korea, Yoon (Baek Yoon-sik), taking his right hand man, Joo Young-jak (Kim Kang-woo), into a huge vault of cash to retrieve bribe money for his legally troubled son. Soon, we meet the rest of the family, including the controlling wife, Baek Geum-ok (Yoon Yeo-jeong), the docile daughter, the bad-boy son in legal jeopardy, and their Filipino maid. During this third of the movie, a number of intriguing themes emerge, including illicit financial dealings, dangerous greed and the disparity between the upper and lower classes.

Best of all, Joo, the family helper whose point of view dominates most of the film, seems oddly ambivalent about it all. The family clearly trusts him as one of their own, but his cool, stoic demeanor seems to betray a sense of dissatisfaction, or even rebellion. As the cards are stacked at the beginning, it's exciting to wonder what role he'll play in the numerous potential plot threads.

As it turns out, he doesn't play much of a role in any of them. In fact, they are all more or less pushed to the side when Baek catches Yoon cheating on her. This event throws the family into extremely well-mannered and subdued chaos, and from here, the film quickly devolves into a unfocused soap opera.

Sure, there is power-grabbing, jealousy and even murder, but it never feels very urgent or dramatic. It's also all far too low-key to reflect the life of excess that these characters lead. Even when the film rises above petty family-struggles, the meandering narrative prevents all of the twists from registering in any meaningful way.

Like The Housemaid, the images are exquisitely composed, and the minimalist set-design is nearly flawless. During the first third, before the movie has completely lost steam, Im proves once again that he can shoot sex scenes that rival Adrien Lyne at his best. The film also gets a fair amount of mileage out of its actors, especially Yoon, Kim and Baek. But while each of the latter are magnetic and compulsively watchable, even that can't hold audience interest when their characters stop being interesting.

The film is anything but subtle in its aims. That is, by the end it's clear that Im is once again railing against the corrupting forces of excessive wealth and the myriad problems to which it leads. What's puzzling though, is why he chose such a dull, confused narrative with which to hammer the blunt idea home.

Do you feel this content is inappropriate or infringes upon your rights? Click here to report it, or see our DMCA policy.
Sang-soo ImKang-woo KimYun-shik BaekYeo-jeong YoonHyo-jin KimDramaThriller

More about The Taste Of Money