Sexy, Stylish Teaser For Im Sang-soo's THE TASTE OF MONEY 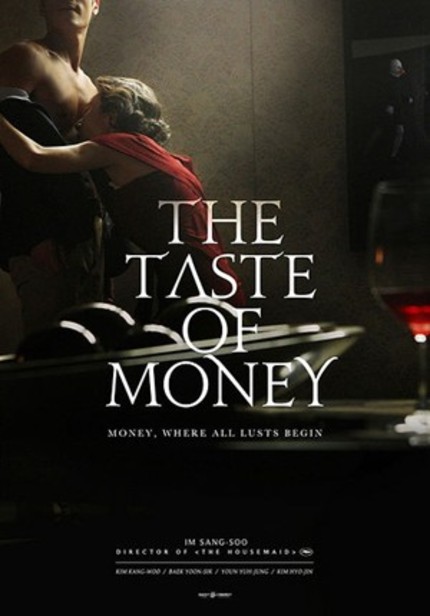 Director Im Sang-soo created quite a stir a couple years back with his erotically charged remake of classic Korean thriller The Housemaid and he's back at it with his upcoming effort The Taste Of Money.

Young-jak , who is a private secretary of madam PAIK, the center power of Korean conglomerate, witnesses immoral private issues of her wealthy family. Meanwhile, he finds out that madam PAIK's husband, Mr. YOON is having affair with their Filipino housemaid, Eva. He reports what he witnessed to madam PAIK, and now despaired madam PAIK is greedily seducing Young-jak in order to keep him on her side . Young-jak is deeper into madam PAIK's family issues when he finds out the brutally killed Eva. Lost between his morality and shortcut to successful life, he has to make the biggest decision he's ever made, to choose whom he will hang on to, in order to survive in this harsh world, where he wasn't born with a silver spoon in his mouth.

The subject matter here is instantly familiar to anyone who has seen Im's previous film, the stew of sex, age, power and money being very similar to what drove The Housemaid to international acclaim. And, frankly, when you do something as well as Im does this there's no reason to change. The first teaser for the film has arrived and it's truly striking stuff. Take a look below.
Sign-In to Vote
Tweet 0 Submit

Do you feel this content is inappropriate or infringes upon your rights? Click here to report it, or see our DMCA policy.
Sang-soo ImKang-woo KimYun-shik BaekYeo-jeong YoonHyo-jin KimDramaThriller

More about The Taste Of Money

I haven´t seen The Housemaid yet....this trailer looks ok....but I would rather see this type of material from Je-yong Lee, I liked his version of Choderlos de Laclos novel, it´s been adapted many times in the west.