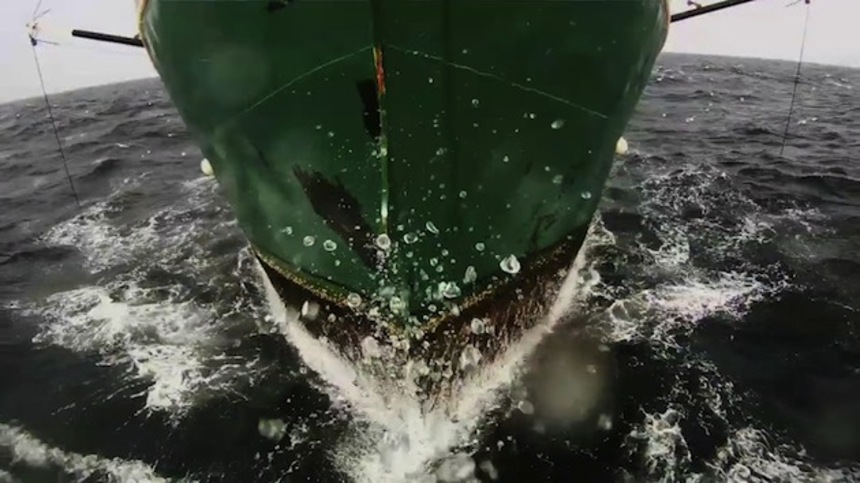 It's dark. First, you hear the eerie clanking of metal and waves: sound of something heavy, something industrial getting pulled out of the bubbling sea. It's all abstract: saturated colors- iridescent blue, yellow, red and green all mixed in. It takes some time to realize that we are on a giant commercial fishing boat, and the crew are detangling an enormous chain that is connected to the fishing net. It's a tedious and also dangerous process by the looks of it. The whole scene reminds me of late Godard films where he manipulates his video image into an abstraction. This is just the beginning of Lucien Castaing-Taylor and Véréna Paravel's jaw dropping second feature, Leviathan.

The images, shot entirely on tiny GoPro cameras, are startling and breathtakingly beautiful. For its tiny size, weight and durability, GoPro is widely used in extreme sports videography. Here, the filmmakers jerry rig and hand-hold them in various places on the ship. Thanks to no depth of field and limited exposure range, the image that this camera captures- dark and ominous, is unlike anything you've seen in a feature film before. There are many scenes that are just mindblowing: In one scene, the camera, mounted in front of the mast, plunges into roiling water, bobs up, down, up, over and over again, contrasting the sea and the sky in a spectacular manner. Amazing sound design by Ernst Karel adds to this visceral sensory experience.

The film, at times, becomes nauseating, considering many of the scenes are hand-held and seeing massive amount of dead fish with their bulging eyes and innards spilling out of their mouth swishing across the frame in blood. Even though there are some humans appearing in the frame, everything in Leviathan appears distant and abstract. It's the cruel nature seen and heard unapologetically and without much filter.

Leviathan is categorized as a documentary, but it is only considered as one in a sense that it's non-narrative. As I was watching it at the press screening, the only comparable movie experience I could think of was watching the films of French filmmaker/visual artist Philippe Grandrieux- especially Un Lac. Described by some critics as the haptic cinema, Grandrieux's work is regarded as the cinema of the senses before the intellect. That human brain processes many types of information that are not formed into thoughts before experienced and embodied. Leviathan needs to be seen on the big screen to get the full impact. It's an enthralling theater going experience from beginning to end.

True story: as I was standing in line to attend the press screening for the film, I noticed a little  wild salt-pepper haired Frenchman with dark glasses in front of me. Could he be Philippe Grandrieux? I thought to myself. Grandrieux turned out to be a good friend of the filmmakers, as he joined the Q & A session after the screening, defending the filmmakers from a barrage of asinine questions like "What's the meaning of this film?"


Dustin Chang is a freelance writer. His musings and opinions can be found at www.dustinchang.com