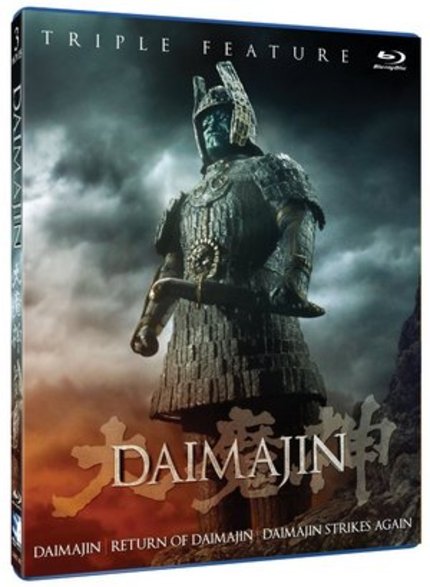 If you know of home video distributor Mill Creek Entertainment at all, it's probably because they specialize in public domain mega packs. You've seen them, the huge DVD cases advertising 50 horror films, or 20 spaghetti westerns, that stuff. If that's all you know about them, you're missing out because they've quietly made a name for themselves with their quality release of the Heisei Gamera trilogy (reviewed here), and as such, their announcement of a Damaijin trilogy Blu-ray set was very appealing.

Daimajin and its sequels had fallen victim to dodgy licensors and unstable distribution companies, and as a result the films had been out of print in the US for years. The Daimajin trilogy DVD set was going for over $100 in some places on the secondary market. This is one reason that this set is such a godsend. Not only does Mill Creek do quality work, but they do it at an extremely reasonable price. The Gamera trilogy on Blu-ray hovers between $7-12 very consistently. As far as I've seen, the highest that this Daimajin set has been at Amazon has been $23, and if you're ambitious you can find it for around $10. But the real question is, "is it worth even that?" The answer is an overwhelming "yes."

The Daimajin films are a bit of a hard right turn if you try to compare them to the classic 60s kaiju films, which is the easiest comparison to make. However, these films, the first two at least (Daimajin & Return of Daimajin) are more like 50s samurai dramas with a supernatural slant. The statue is present in the film, and the protagonists in the films are aware of its power, but it is very rarely demonstrated unless Daimajin is expressly called upon in times of extreme duress. In other words, we don't get any Daimajin action until the last 20 or so minutes of any of these films. If this were a proper kaiju film, that would be a deal-breaker, but with Daimajin it works. The reason is that these films are built to last and not simply to capitalize on the kaiju craze.

If you didn't know about the Daimajin films as "those movies with the giant statue monster," you could be forgiven for thinking that they are just samurai dramas. The stories are very familiar sounding, not terribly original, but well-executed. By the time Daimajin rolls into action in the last reel, he's just the icing on the cake. There isn't Godzilla-level destruction, but it's not necessary here. Daimajin is a precise vengeful god most of the time; he targets his foes rather than stomping through towns without direction. That's also why it takes so long for him to appear, he isn't just there to provide the destruction, he's there to serve a purpose, to protect those who need to be protected. Daimajin is a savior.

I've spoken mostly about the first two films thus far, and there's a reason for that. My son is a kaiju freak. He loves Godzilla and the stable of Toho monsters as well as Gamera and his foes. I had never seen these films before and I thought they might be a good addition to his collection of monster movie knowledge. It became quickly apparent that Daimajin and Return of Daimajin are way too slow moving to engage his 7 year old brain. He's a smart kid, but the films are very adult oriented in their pacing. The third film, Daimajin Strikes Again, on the other hand is right up his alley!

Daimajin Strikes Again follows much the same basic outline, except instead of warring towns, Daimajin is protecting enslaved poor people who need to be saved from their captors. Among these men and women is a small group of young boys who are determined to free their town from this evil scourge. Late one night they all sneak off to find the legendary Daimajin and pray for him to come and free their families and towns. This part of the film is really a fun adventure film for kids. This is the kind of thing that kids these days don't do much anymore. It's kind of a medieval Japanese Stand By Me, "hey, you guys wanna see a giant vengeful statue?" This angle is fresh and perfect for kids, it engages them by putting characters on the screen with whom they can relate, and giving them real danger and peril to conquer. Daimajin Strikes Back is probably my favorite of the three for that reason, alone.

The trilogy is certainly well worth owning, and at the incredible price for which these films can be had, it should be a no-brainer.

Mill Creek presents the Daimajin trilogy on two Blu-ray discs, which does these films no harm at all as they top out at less than 80 minutes each. The colors are strong, detail is strong, and contrast is mostly very good. Presumably these discs are identical to the Japanese Blus in terms of image quality, but Mill Creek adds the English dub tracks, including a brand new track for the third film, all of which are presented in pretty solid DTS-HD MA 2.0. I was wary of the image quality going in, but everything looks really solid. Definitely worth the price.

The discs promise three "behind the scenes" segments, one for each film, however that's not entirely accurate. What we actually get is an extended interview with Daimajin's cinematographer, Morita Fujito, that spans decades in the Japanese film biz and looks both specifically at the art and effects of Daimajin as well as the history of wartime and post-war Japanese cinema. I think they could probably have left the entire interview stitched together, but in any case, it is all really insightful stuff. Definitely worth your time.

In case you can't tell, I'm a fan of this set. Mill Creek has two hi-def winners in a row, I can't wait to see what they do next!