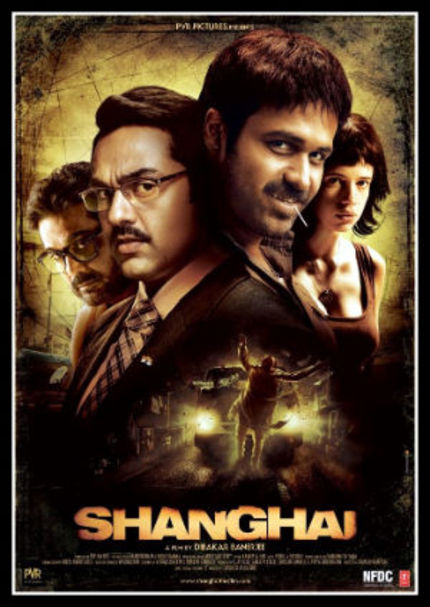 (The film screens at TIFF tonight and twice on Saturday. Here's our review from its theatrical release in June.)

With Shanghai, filmmaker Dibakar Banerjee has done something that few Indian filmmakers have been able to accomplish: He has created a film that transcends cultural and stylistic barriers and is ready for a world audience exactly as it is.

There is no need for snipping songs or inane comedy tracks, there are no impenetrably culturally specific references to make the casual viewer run for cover, there is only tension and that is universal. Sure, there are plenty of filmmakers in India making "parallel" films, those kinds of films that eschew the demands of common masala, however, the vast majority of them are extremely low key, and would require an art house crowd to appreciate them. No concessions need to be made for Shanghai, the film is ready to go; a gripping story and intense lead performances anchor this masterful adaptation of Vassilis Vassilikos' Z.

India is the world's largest democracy, with one of the largest growing economies, and if you ask any industrialist, you can't make an omelet without breaking some eggs. Welcome to Bharat Nagar, an up and coming town with big dreams fueled by promises from an international corporation to build a modern business park all but guaranteed to turn this sleepy hamlet into a bustling metropolis, like the titular Shanghai. However, progress comes at a price, and when a socialist intellectual, Prosenjit Chatterjee's Dr. Ahemadi, appears in Bharat Nagar to talk the people out of signing over everything they own in the name of progress, he's mowed down by a speeding truck, throwing the entire town into chaos.

It seems pretty clear to everyone that it was no accident, however, investigator Krishnan (Abhay Deol) is having a hell of a time getting any cooperation in solving the case. That is until the victim's lover/cohort Shalini (Kalki Koechlin) and a camera toting hustler named Jogi (Emraan Hashmi), who happened to be filming the scene, step up with some details. However, now the race is on; will they get to Krishnan before someone else gets to them? 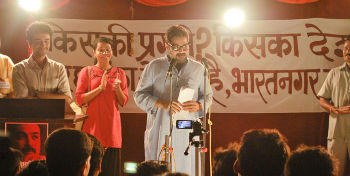 This is an India that most casual film fans will probably never have seen, though seasoned vets will be fairly familiar with it. We caught glimpses of India-for-sale in Danny Boyle's magical realist take on the Mumbai underworld, Slumdog Millionaire, however, even that was shined up a bit to make it more palatable for the masses. Dibakar Banerjee's India is more grounded, and therefore, less shiny and exotic. His treatment of the novel fits perfectly with a country so eager to prove itself as an international financial power that it is willing to step on millions of seemingly insignificant bumps in the road to get its way. The temptation to plunder one's way to success is great, and on occasion, greater than the instinct for self-preservation. Dibakar's doers of dirty deeds aren't bad people, they're just looking for their piece of the pie and grabbing what they can while the getting's good.

Shanghai moves at a breakneck pace, delivering only what we need to know, exactly when we need to know it. As a result, the film comes in at a cozy runtime of just under two hours. The pacing is impeccable, and the editing superb. Banerjee and his editor, Namrata Rao, have created some of the most evocative wordless sequences I've seen in Indian film so far, really exciting stuff. The background score from Mikey McCleary is very effective and understated. Less flashy, but perfectly appropriate and well suitred to the film, is the cinematography of Nikos Andritsakis, who worked on Banerjee's previous film, Love, Sex, Aur Dhoka. As good as the behind the scenes crew is, it was the on screen talent that blew me away.

For a long time Emraan Hashmi has been jokingly referred to as Bollywood's "kissing bandit" for his steamy performances on screen. As a result of his willingness to do what actors around the world do in films every day, he found himself as something of a pariah, unable to get serious roles in major films. He'd made several successful films, but nothing to turn the critics heads until recently. His performances in Milan Luthria's Once Upon a Time in Mumbai and The Dirty Picture gave film fans a better look at him, even though I thought he was one of the latter film's weak points. However, it is with Shanghai that he's really reached his potential. Hashmi's Jogi is not a great guy, he's a sleazy videographer who will just as soon photograph a political rally for a few bucks as he will a couple getting it on for a few more. Emraan plays the character with the exact mix of naivete, arrogance, and decency needed for the role. His character's arc is definitely the most well-defined in the film, and he pulls it off fantastically. 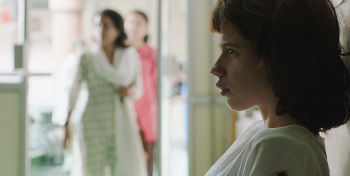 In stark contrast with Jogi's evolution as a human being is the staunch dedication of Kalki Koechlin's Shalini. Her unusual looks have relegated her to "foreigner" status in films, since she doesn't really look completely indigenously Indian, whatever that means (her parents are French, but she was raised in India). In this film, however, she is fighting the good fight for the common Indian more so than some of the natural born residents who've become so accustomed to the corruption that they'd rather live their lives in as little pain as possible, rather than fight back against something they know is wrong. Koechlin's intensity is impressive, and her future bright if she keeps turning in performances like the ones in That Girl in Yellow Boots and Shanghai.

As much as I campaign for the acceptance of Indian cinema on a wider scope, I often find myself having to explain my recommendations or give warnings ahead of time. There are just too many tropes of Indian cinema that will confound the casual viewer of your usual Bollywood cinema. Even the best films, like Karan Malhotra's Agneepath, typically follow the song and dance pattern that has been the norm for nearly 80 years.

Shanghai, on the other hand, is at once completely Indian in its tone, characters, and settings, and yet still a film that feels very much at home in the wider world of cinema. There is no reason you should not seek this film out, in fact, I find it to be a shame that is seems to be relegated to the usual Indian film venues when it should be playing independent movie theaters alongside the best thrillers from Scandinavia and East Asia. Seek out Shanghai, you'll be glad you did.