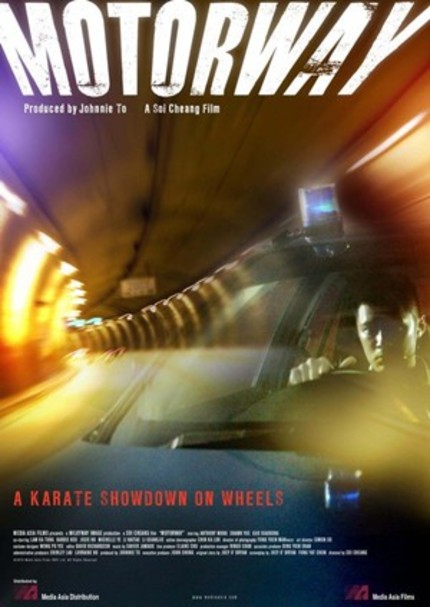 It was way back in September 2009 when we first reported that director Soi Cheang would be following up his award-winning film Accident with a car chase action thriller entitled Motorway. Fast-forward 18 months and a trailer for the film surfaced and we began looking to summer 2011 for the film's release. But nothing materialised. Not for an entire year. Not until now.

There have been rumours of rewrites, reshoots, numerous re-edits and even a second composer brought on board, as Cheang and Producer Johnnie To wrestled with the unwieldy beast to bring a version of Motorway to our screens. In the interim, a little film called Drive - starring Ryan Gosling as an uber-cool Hollywood getaway driver - surfaced at Cannes, bagged the Best Director prize for Dane Nicolas Winding Refn, and proceeded to earn the love of pretty much every genre-loving cinephile out there.

After having now seen Motorway, there is no doubt in my mind that at some point in the last 12 months the filmmakers watched Drive and decided that whatever they had been trying to do up to this point simply wasn't working. Rather than chip away any longer at the film they had been trying to make, they should throw out as much excess story and superfluous character development as possible and just concentrate on making a stylish urban thriller in which a bunch of cool guys get into a series of carefully constructed and intelligently executed car chases through the heart of Hong Kong.

Staged almost entirely at night, with the neon lights bouncing off their windscreens and a minimalistic electro soundtrack funking up the stereo, Motorway presents just enough plot to string the stunts together coherently, while ditching any suggestion of romance, melodrama or, for the most part, conversation. This is a film about men and their machines, and the artistry behind the wheel that blurs the distinction between the two.

Rookie cop Cheung (Shawn Yue) is booted off the "Invisible Team" of undercover pursuit drivers after abandoning his partner on the road to give chase to a fleeing offender. Not that his partner minds. Lo (Anthony Wong) already has one eye on his retirement plan with the wife and kids. But when a dangerous criminal (Li Haitao) is busted out of jail by a notorious getaway driver, Jiang (Guo Xiaodong), and their efforts to steal a fist-sized diamond leaves a trail of bodies all over town, Cheung and Lo soon find themselves in hot pursuit.

There are remnants throughout Motorway of sub-plots that may well have been abandoned in Cheang's efforts to deliver a streamlined, yet comprehensible film. Barbie Hsu's nameless surgeon is the closest Cheung gets to a love interest, but she now only appears three times, although there remains the suggestion that something exists between them. Likewise, it is suggested that Lo and Jiang have a driving rivalry that dates back some 15 years, to when Lo came close to apprehending him, but there is little exposition left regarding the details of what went down.

However, Motorway's stripped-down, baggage-free narrative is arguably to the film's credit. There simply isn't enough substance left to make much of a mess with, as about 75% of the film's lean 90-minute running time is spent on the road, and the performances rarely have the opportunity to be much more than an assortment of scowls over the top of their respective steering wheels. Motorway's single undeniable strength is the work of Chin Kar Lok and his team of stunt drivers, and whenever the actors take to their cars - which is most of the time - the film manages to impress. Whether hurtling through Hong Kong's Central business district in the dead of night (filmed guerrilla-style without permits), or revving their engines to produce huge clouds of smoke and precision-turning manoeuvres, the action is calculated, gorgeously shot and paced to perfection.

Motorway offers no surprises and plays out exactly how you predict that it will. Characters exist to service the action, or to provide a motive for another high octane chase sequence, but there are no real relationships in play and nothing really at stake, beyond crashing horribly at the next hairpin bend. However, despite these limitations, Motorway nonetheless proves to be a slick, entertaining, no-nonsense chase thriller with a talented driver at the wheel and a tankful of style, even if there ain't much under the hood.

(Review originally published during the film's theatrical release in Hong Kong in June 2012. See also a review by contributing writer Kwenton Bellette for his thoughts from the theatrical release in Australia. Motorway enjoyed its North American premiere at TIFF on Wednesday evening; it screens again today and Sunday.)