Review: THE HOUSE AT THE END OF THE STREET Drags Down Cinematic Property Values 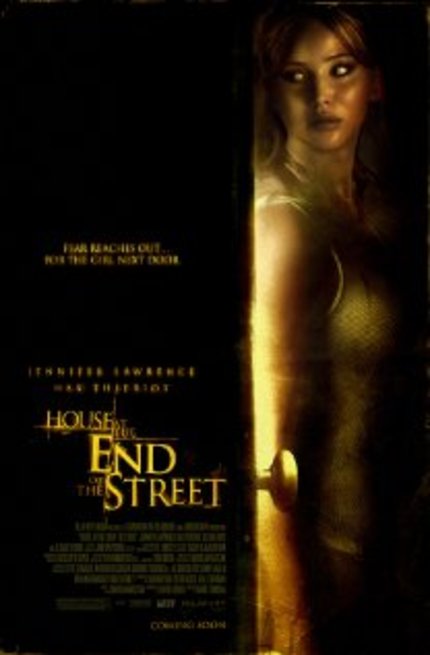 Short on scares but big on contrivance, the many problems with the PG-13 horror movie The House at the End of the Street start with the title.

The mysterious house that everyone in town is wigged out about is actually in the woods, not really on the street at all. But that's the least of what's wrong with this picture. A cinematic building inspector could produce a long list of code violations in this blighted effort, but let's keep thing simpler, shall we?

The film's foundation (the screenplay) is an idea that, at one time, might've passed muster to make a decent film, but the version that was filmed has all the tension sucked out of it, a series of twisty pathways looking for a floor plan. Imagine Psycho if there were numerous early scenes of Norman grooming his dead mother, and then ask yourself how that would affect the climax. Then you get some idea of dull mess currently before us.
The true mystery here is what stars Jennifer Lawrence (hot off of The Hunger Games), and (to a lesser degree) Elisabeth Shue are doing in this neck of the cinematic woods. At first glance, The House at the End of the Street appears to be one of two things: Either the latest high profile Hollywood horror film, or an older effort that's been withering on a shelf somewhere and was deemed releasable only now that its star has since become a celebrity. The answer becomes glaringly obvious within the first thirty seconds of the movie. But for definitive proof, one must hang around until the last thirty seconds, when the final credits read "Copyright 2011." This sort of thing is, of course, never a good sign.
Lawrence plays a high school musician (supposedly an acomplished rock n' roller, although the longest song we hear her play ("I'm That Girl") might qualify as one of the worst movie songs in years, if only we'd been subjected to more of it) who's new in town. Things are not well between her and her mother (Shue), but they're the only family each other has. Anyhow, it isn't long before the weird boy (Max Thieriot) in the house at the end of the, uh, woods (?) takes a liking to our young heroine. Through a series of clunky expository exchanges between various characters, we learn all about how this weird boy is the only remaining member of his family, following a murderous rampage by his younger sister years ago. Of course, the secrets run deeper than this (and are accessible only via a spiral staircase that leads to a dingy underground shelter. How or why the said shelter, so essential to the plot, ever got beneath this house, remains another mystery).
It's obvious from the laughable amount of unmotivated post-production tinkering (absurd amounts of third party "film look" After Effects filters simulating burnt film spots, scratches, pops, and bursts of over-exposure) that the filmmakers knew that some eleventh hour home improvement was in order. It all amounts to gaudy window dressing. None of this overcooked forced stylization does a thing to make this by-the-numbers bore more watchable. It only makes one feels increasingly sorry for the on-screen talent, most of whom are clearly above this. It makes one wonder, in this unfortunate age of studios limiting more and more press screenings, why they put out the welcome mat for critics for this one. (Not that I'm complaining - every film, no matter how bad, should be filtered through film critics. But still I wonder, why this and not, say, Dredd 3D?)
The House at the End of the Street is a dilapidated eyesore that someone saw fit to haphazardly slap a fresh coat of paint onto, and call it a thing. That thing is ultimately more forgettable than hateful (it's marketing campaign, such as it is, has seized upon the title's acronym HATES. It's as if they knew the critical response all along...), but still a heavy qualifier for Worst Films of 2012 lists. My advice is to stay away from this House, lest your property value be dragged down with it.
Tweet Post Submit

More about The House at the End of the Street