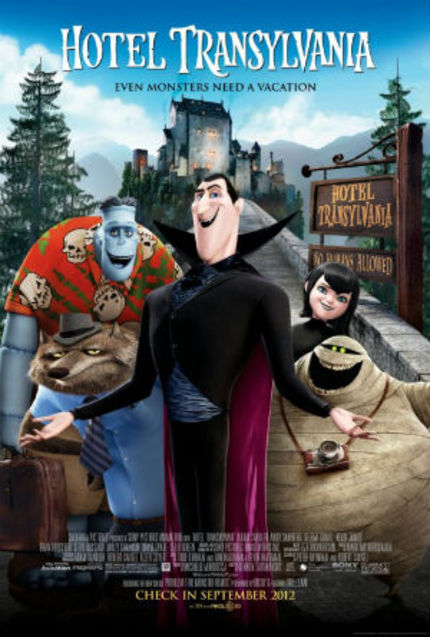 After years of fruitless searching, it would appear that modern science has finally found the right place for Adam Sandler's crew: children's cartoons. Hotel Transylvania, a congenial toon about a monsters-only resort accidentally discovered by a human, has a lot of the same names in the credits as Sandler's recent live-action output, with roles for friends and family members and a writing credit for longtime SNL collaborator Robert Smigel. But while Jack and Jill, That's My Boy, Just Go with It, Grown Ups, etc., etc., have been lazily written and dully executed, some of them nearing atrocity level, Hotel Transylvania is a mild treat. It turns out childish jokes go down a lot smoother when they're actually directed at children, and when you can't see everybody's simpering faces mugging for the camera all the time.

Sandler is the voice of Count Dracula, who, in the spirit of animated films since the beginning, is a single parent. He and his daughter, Mavis (Selena Gomez), live happily in a remote castle that's been turned into a hotel catering exclusively to a monster clientele. Dracula and his associates avoid interaction with people at all costs, teaching their children to fear the dangerous humans. But now, on the occasion of Mavis' 118th birthday and entry into adulthood, Drac's little girl desperately wants to see what life is like out there.

She gets her chance, sort of, when an American backpacker dude named Jonathan (Andy Samberg) stumbles into the hotel on its busiest weekend, when the place is just crawling with monsters. Jonathan, a go-with-the-flow kind of bro, finds the existence of monsters more awesome than terrifying, and he's willing to pretend to be one of them so that Dracula's business won't be ruined by the scandal of a human violating the sanctity of this place. Also, he has a crush on Mavis.

Directed by Dexter's Laboratory creator Genndy Tartakovsky and written by Smigel and Peter Baynham (Arthur Christmas), Hotel Transylvania is not exactly bursting with creative story elements. The formula is essentially the same one perfected by the Disney people, in which a headstrong girl clashes with her father, pursues her own path, and finds love, while Dad realizes he has been stubborn and must let go. The details provided here aren't particularly original or funny.

But! A lot of the cartoonish slapstick and easygoing dialogue is. The arrival of fellow creatures like Frankenstein (Kevin James), his wife (Fran Drescher), a mummy (CeeLo Green), an invisible man (David Spade), two werewolves (Steve Buscemi and Molly Shannon), their many rambunctious children, and assorted others provides for some fun "monster mash" entertainment. You know the type of gag to expect -- yes, it turns out monsters fart too -- but the zippy pace and good-natured vibe go a long way toward making the derivative material pleasant. There are also a few sly jokes about the way vampires are misrepresented in modern culture, and exactly one line (but it's enough) addressing the "racism" of a hotel that doesn't allow humans.

We're not talking non-stop laughs here. We're talking smiles, chuckles, and a few guffaws. But in the role of a concerned father and cartoon monster, Sandler manages to be something he has not been onscreen in a long time: likable. This film is no less artificial or contrived than the usual Sandler fare; the difference is that artificiality isn't as great a hindrance in animation, where a certain amount of oversimplification is expected. I say the only hope for Grown Ups 2 is to make it a cartoon and have everybody be aliens, animals, or monsters instead of people. Adam Sandler was born to play a non-human.