FrightFest 2012 Review: HIDDEN IN THE WOODS Is Bloody Disgusting 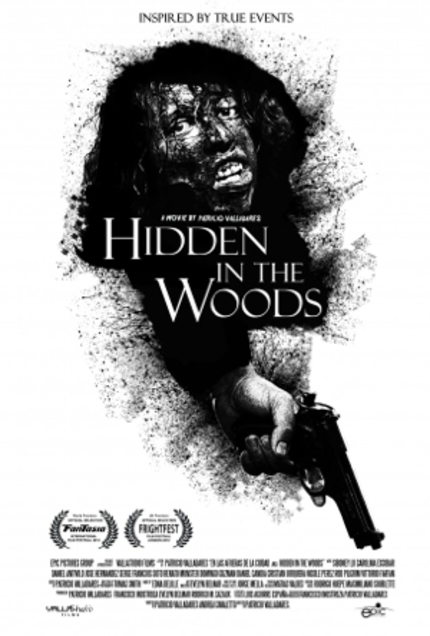 The first (but certainly not the last) film to rub audiences the wrong way at this year's FrightFest was Hidden In The Woods, the latest effort from Chilean director Patricio Valladares. A relentlessly rough, misogynistic and amoral story of brutality and survival, the film sticks its unsanitary hooks in early, but despite its repellent tone and exploitative content, refuses to be easily dismissed.

Felipe (Daniel Antivilo) is a vile excuse for a human, who babysits the drug stash of local kingpin Uncle Costello (Serge Francois) at his remote woodland abode. No sooner have we been introduced to Felipe, we see him beat and murder his own wife in front of his two young daughters, Ana and Anny. He then proceeds to rape Ana, fathering a repugnant dog boy named Manuel, whom is kept chained up in a nearby outhouse. Years pass and his daughters "come of age", attracting the sleazy attentions of Costello, who proposes to send them to work as prostitutes. While we are momentarily reassured to see that this sentiment bothers Felipe, soon enough he unleashes his own incestuous libido on Anny, and the cycle looks to repeat itself.

At that moment the cops arrive, investigating allegations of child abuse (better late than never, although we never learn who called it in), but Felipe murders both officers with a chainsaw before fleeing the scene. He is arrested and incarcerated soon afterwards, and Costello's men arrive, searching for the girls and the drug stash. Our three adolescent victims have no choice but to flee the scene and hole up in a remote wood cabin.

So far, so rather disgusting, but Valladares has yet to show quite how repugnant and exploitative he can be. With nobody to look after them, Ana (Siboney Lo) turns to prostitution to feed her family. Valladares depicts Ana's hustle through an admittedly rather amusing montage of Ana giving blow jobs to a series of johns in the cabs of their trucks, public toilets and pretty much anywhere else there is space to get on her knees. If only the rest of the film trod the same line between horrific realism and pitch black humour as well as in this single sequence. Instead, Valladares paints a picture of a society where every man is not just a potential rapist, but an actual rapist, while every female character is to be leered at for nothing more than being a woman. The result is a film that seemingly wants everyone to hate it.

Ana works the streets and the bus shelters, and the audience is asked to sympathise with just how miserable her existence has become, but all the while the camera jostles to get a peek down her top or up her mini skirt, as if the director assumes we want to participate in her degradation. Meanwhile, younger sister Anny is no better off. When set upon by a couple of randy and rapey backpackers, the film takes yet another turn towards the vile and absurd, as a naked Anny proceeds to tear open the throat of her violator with her bare teeth, and get a taste for his sweet flesh. Ana discovers Anny on her knees, completely naked and smeared with blood and gore. Yet instead of being hysterical, Anny pleads, almost with a coquettish innocence, that she has done nothing wrong, and that her attacker-turned-victim actually tastes pretty good.

In this regard, Hidden In The Woods is reminiscent of Joe Chein's Taiwanese flick Zombie 108, another film so blissfully ignorant of the boundaries of taste and acceptability - even within the confines of the allegedly unrestricted horror genre - that it becomes strangely captivating. I found myself bewitched by both films, and determined to see them through to the bitter end, if only to witness just how inappropriate and offensive they could be. For this reason, I understand where Valladares was coming from when he foolishly introduced his film by claiming to find the rape, torture and murder "funny". It was an incredibly poorly judged statement used to introduce a film that is equally out of touch with the audience it was being screened to, but all that said, Hidden In The Woods is not entirely devoid of merit.

Siboney Lo and Carolina Escobar are both rather excellent as the sisters at the centre of this bloody debacle and acquit themselves admirably through a cavalcade of abuse and exertion. When their plight turns from one of abuse to becoming the abusers, you never question for one minute that they could make this transition. They are fragile yet resilient, innocent yet horrifyingly world weary, and their wide-eyed, feral performances display these qualities admirably. The film is also made with a notable degree of technical competence. It frequently makes good use of its locations and is tightly edited to give its numerous sequences of peril and terror the intended mood of tension, urgency and revulsion.

It is easy to see why audiences have taken against Hidden In The Woods, and during a festival line-up lambasted by some for including an overly generous amount of rape and misogyny, this film was always going to be set-upon as a prime offender. Valladares has most certainly delivered a filthy, exploitative and incredibly nasty piece of work, perhaps as guilty of abusing its female leads as much as the vile men that populate its dirt roads, truck stops and backwoods hideouts. That said, even as I was repeatedly appalled by what I witnessed on screen, I remained transfixed by the film, right to its ludicrously blood-soaked and inept finale.