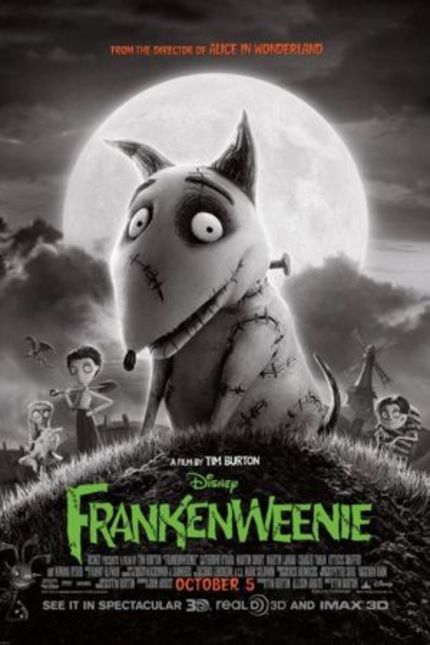 Tim Burton's return to stop-motion reanimates many of his favourite themes, from 50s Americana to Gothic horror, but fails to generate an emotional spark.

It was back in 1984 when Burton, then a burgeoning young filmmaker in Disney's stable, produced a 30-minute live action short about a young lad named Victor Frankenstein who resurrects his dog in his parents' attic, following a fatal car accident. Originally intended to play ahead of a re-issue of Pinocchio, Frankenweenie was shelved after receiving a PG rating for its overall dark tone. Even back then, Burton had expressed a desire to develop the story into a feature film, but it would be another 28 years before that would come to fruition.

Reuniting Burton with producer Alison Abbate (The Corpse Bride, The Nightmare Before Christmas), Frankenweenie the full-length version comes to life in stop-motion form, providing the perfect vehicle for the director's signature artistic style to run amok. Much of the original story makes the transition unscathed, as lonely young Victor harnesses the power of lightning to bring his dog Sparky back to life in glorious, though potentially commercially risky, black & white. At first, Victor is able to keep his reanimated pooch a secret, until his inquisitive classmates uncover the truth and soon enough the entire community of New Holland has devolved into a torch-wielding mob, leading to a dramatic showdown at the town windmill.

While anybody familiar with James Whale's classic Universal monster movies, specifically Frankenstein and its sequel, Bride of Frankenstein, can track Burton's loving homage almost beat for beat, Frankenweenie works best when expanding its universe and referencing the horror genre more broadly. Victor's classmates are a veritable rogues' gallery of ghoulish tweens who resemble Frankenstein's hunchback Fritz, Cesare the gangly somnambulist from The Cabinet of Dr. Caligari, a wide-eyed blonde with a supposedly psychic cat, and then there's Elsa Van Helsing, the girl-next-door voiced by Winona Ryder, with an Elsa Lanchester poodle. Not only are these oddball students the source of many of the film's laughs, but when following Victor's example to re-animate their own deceased pets, it leads to an epic, monster-fuelled finale that proves the film's highlight.

All that said, Frankenweenie is only superficially entertaining, with the themes at the film's centre - acceptance, loyalty, self-belief and friendship - lacking any emotional resonance. The film is lightweight, shallow and always more concerned with rewarding its older audience than playing to pre-teen viewers who may be struggling to cope with similar issues to Victor. Instead of referencing Japanese kaiju movies or campy Hammer Horror that may well be lost on younger viewers, Frankenweenie would have benefitted significantly from helping children contextualise their own feelings of loss and guilt.

In this regard, Frankenweenie fails to tap into that particular rite of passage, to impart any potentially shrewd or useful wisdom, and as a result will likely fade from memory far sooner than its stunning visuals deserve. It is most definitely a pleasure to see Burton return to his roots, away from popular literary works, lurid visuals and - ahem - Johnny Depp, but for all its beautiful model work and stunning visual prowess, Burton has failed to bring Frankenweenie truly to life.