Fantastic Fest 2012 Review: BRING ME THE HEAD OF THE MACHINE GUN WOMAN is Sexy Violent Fun 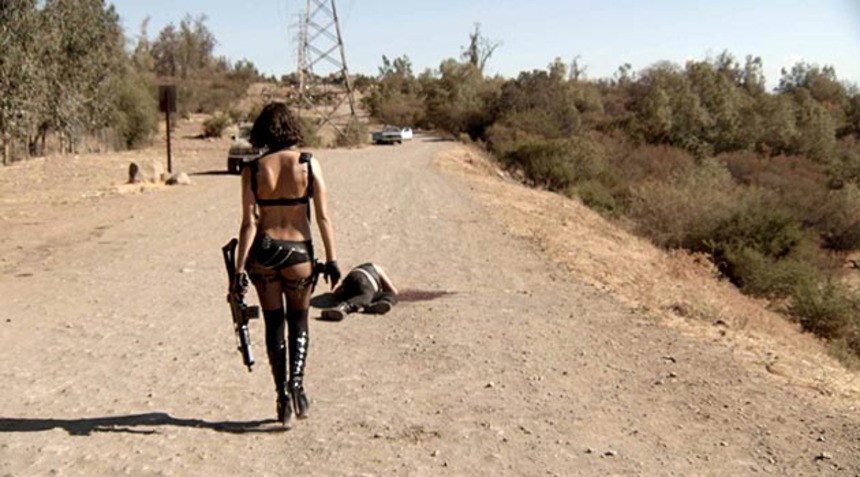 There are few filmmakers who know how to create as much onscreen fun with as small of a budget as Chilean writer/director Ernesto Diaz Espinoza. With 70s cinematic sensibilities, funk-filled soundtracks, and always awesome action, Mirageman and Mandrill were fun-packed riffs on the superhero vigilante and suave assassin (respectively) subgenres. His latest, Bring Me the Head of the Machine Gun Woman is his take on guns-blazing bounty hunter exploitation films (he calls it LatinXploitation, or LXPL for short). Mix in a heavy dose of video game culture via a Grand Theft Auto mission motif and you have another big success from Espinoza and a film that is truly fantastic.

Marking a big departure for the director, Espinoza has traded in the high kicks of action star Marko Zaror for the high heels of muy caliente actress Fernanda Urrejola. Wearing more guns than clothing, it's easy to get lost in the spectacle as she struts across the city leaving a path bullet-filled corpses in her wake.

While it's the Machine Gun Woman (MGW) of the title who steals the show (and undoubtedly the poster, dvd box, press stills, etc.), the story is actually about a loser DJ named Santiago (Mattias Oviedo) who lives at home with his mom and spends most of his time playing video games. Santiago finds himself embroiled in a manhunt for the hitwoman when he lies to mob boss Che Sausage that he can find MGW (who also happens to be Sausage's former flame). This is how the job of bringing in the most ruthless killer to ever wear stilettos falls on the extremely unqualified shoulders of Santiago. The only way he'll have a chance of accomplishing the feat is if he treats it like a video game.

Always a stylish director, here Espinoza employs a particularly successful motif of breaking the narrative up into missions. Just like in a Grand Theft Auto-style video game, Santiago must complete a number of smaller tasks before he can find MGW. The director even goes so far as to put the camera at a high angle right behind Santiago as he drives around town. It's a heavy-handed technique, no doubt, but it's one that contributes to the narrative and is fun throughout.

Fun really is the name of the game when it comes to Espinoza's movies, and Machine Gun Woman is very much in line with the good times of his earlier work. It's particularly remarkable that Espinoza and his team are able to make such enjoyable fare on such tiny budgets (this film was shot in only 15 days). While he seems certain to continue the LXPL path for some time, it would be fascinating to see what the filmmaker would do with a modestly budgeted Hollywood film.

But for now we get to have fun with the LXPL and the wildly sexy violence of Bring Me the Head of the Machine Gun Woman. By all accounts this film is a blast. You're sure to be left with a smile on your face and one obvious thought in your head: bring on what is sure to be the next installment in the series... Machine Gun Woman versus Mandrill!!

Bring Me the Head of the Machine Gun Woman

Do you feel this content is inappropriate or infringes upon your rights? Click here to report it, or see our DMCA policy.
Ernesto Díaz EspinozaFernanda UrrejolaMatías OviedoJorge AlisSofía GarcíaActionComedyCrime

More about Bring Me The Head Of The Machine Gun Woman