Review: The Sherlockian THE BULLET VANISHES Eschews Ego for Mystery 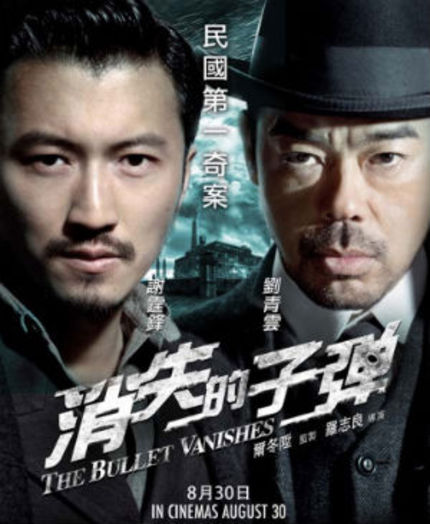 An arsenal, strange deaths and a ghost bullet all culminate in a twisty confined plot that centres around peculiar officer Song (Ching-Wan Lau as a lesser Crazy Detective than his Johnnie To joint) and already-detective, the young and cock-sure Guo (Nicholas Tse, once again doing his own stunts) as they investigate the strange goings-on and quickly realise their hunt for a killer with an unknown motivation and an unknown cause is all part of a mystery they must solve before they themselves become the target.

Look at that poster, what do you think of? If Guy Ritchie's Sherlock Holmes is your answer you'd be on the money. Director Lo Chi-leung's overtly stylised period setting is not exactly an inspired one, but still quite impressive, boasting Hollywood blockbuster visuals and a gorgeous attention to vibrant detail. The Bullet Vanishes spends most of its time in the gargantuan factory grounds of the arsenal, where industrial revolution Britain overtones are abound in 1930's Shanghai. The owner of this mill is a caricature of the most extreme villainy and becomes very grating fast; he and his henchmen immediately fit the bill for culprits, as blood riddled messages, warnings and inklings of a horrible curse literally haunt the poverty-stricken employees of this nefarious place.

The ghost bullet is what Song mostly obsesses over, he places himself in crime scenes, pretending to be the victim walking through the scenario of their demise in a more relatable fashion than Robert Downey Jr's uncanny ability as Holmes. Song is a more refined character, more concerned with the truth than showing off and this is a relief as it gives other actors a chance, and no one but the aforementioned potential villain chews the scenery, despite the air of unrealism in this setting.

The shades of Sherlock linger throughout but there are also many other aesthetics that can be tied to new Hollywood, including western genre tropes, not that there is anything wrong with that. The film is a concoction of mystery and action, and it often works, but it really ironically ramps up when the proceedings slow down and we are given intricate insight into the phantom bullet, the murder device. Clearly the victim has been shot, but no evidence of a physical artefact remains, it is a cracking whodunit and whatdunit as Song and Guo eliminate all possibilities.

Despite the mystery there are some blistering albeit brief action scenes that come from nowhere, adding to the excitement. One particularly inspired fireworks set piece was quite impressive and not over the top to detract from the looming mystery at hand. Some scenes are more conventional than others, the obligatory romance scenes and exposition for instance would fit right at home in a commercial American production, but overall, The Bullet Vanishes is a great crowd-pleasing good old fashioned mystery, set in a pretty unique location and contains some very unexpected developments, it comes highly recommended as an intelligent genre flick.

The Bullet Vanishes will play in limited release in Australia from China Lion at the following locations, and be out in the United States and Canada August 31st.

More about The Bullet Vanishes