The Spanish Film Festival in Australia is in its sumptuous 15th edition and has handpicked the very best comedies, dramas, animations and thrillers from Spain and Spanish-speaking Latin America.

It is a great line-up this year and Twitch is delighted to bring you reviews of the best the festival has to offer.

Celebrated actor, Ricardo Darín (from the Oscar-winning The Secret In Their Eyes) shines in this quirky and honest story of chance and change. Roberto (Darín) is the bitter owner of a hardware store in Buenos Aires. He spends each night in solitude and looks forward to scanning through world newspapers to find and collect clippings about freak accidents too strange to be true. Fate soon intervenes and in an attempt to do the right thing he takes in Jun (Ignacio Huang, Longchamps) - a reserved and melancholic Chinese man lost, alone and unable to speak a word of Spanish but desperate to please. Through kismet of a revelation that connects Jun to his newspaper clip hobby, Roberto helps Jun search for his only relatives.

Director Sebastián Borensztein has created a miniature misadventure that subtly explores bigotry, racism and ethics through cultural clashes and philosophical differences. At a serene lake in China a cow falls from the sky instantly killing a woman on a boat. Flash to a man whose bland daily routine and disdain for the customers he serve have put him in a comfortable rut. Flashbacks reveal he has left his lover, unable to commit to anything Roberto lives each day with no vigour or passion. From the global newspapers he collects, he imagines himself in death fantasies inspired from the bizarre stories within. These Amelie (Jeunet, 2001) inspired vignettes of black comedy ground the unlikely story and reveal the spiteful inner workings of Roberto. Despite this he is still a good man. He watches planes fly in for entertainment one afternoon, perhaps dreaming of getting away, but instead witnesses a Chinese man thrown out of a taxi. The absurdity of this encounter and his inability to leave hinders on his hidden kindness, and Darin pulls off this about-face in the character effortlessly. After he ignores his hang-ups and temporarily takes Jun in he reveals himself as a harsh but fair man, setting rules for Jun to follow. Of course the major hindrance is the language barrier as Jun cannot speak any Spanish. Roberto is nothing but pragmatic and comes up with a few clever initiatives to help Jun find his relatives.

The fish out of water comedy is just the beginning as a very real bond forms between the two, an unspoken agreement that Roberto fights to ignore, but ultimately cannot. This is also reflective in the subplot as customer Mari (Muriel Santa Ana) is clearly enamoured with Roberto, but like his feelings for Jun he actively avoids her passes. After some mishaps and unfortunate incidents including a pointless trip to the Chinese embassy that cleverly conveys the utter failing of Chinese bureaucracy without being too heavy-handed, Roberto faces a turning point and it appears that Jun has helped him more than he thought.

The life affirming ending really brings the message home and it is clear that Jun's interference has made Roberto realise his own sorry state. The beauty here is that throughout this often hilarious story, Borensztein has been handling all of the themes and serious subject matter in a short and sweet manner, tackling heavy subjects in an intelligent and entertaining way that is both illuminating for the audience and Roberto, resulting in a sweet and funny tale of a mismatched pair brought together by fate and changed for the better together because of it.

The 15th Spanish Film Festival is on now in most national cities in Australia until 26th July, more details can be found here. 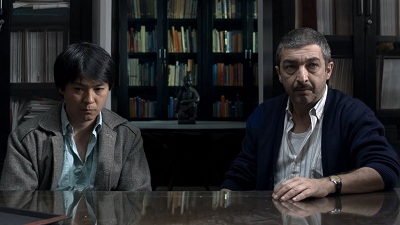