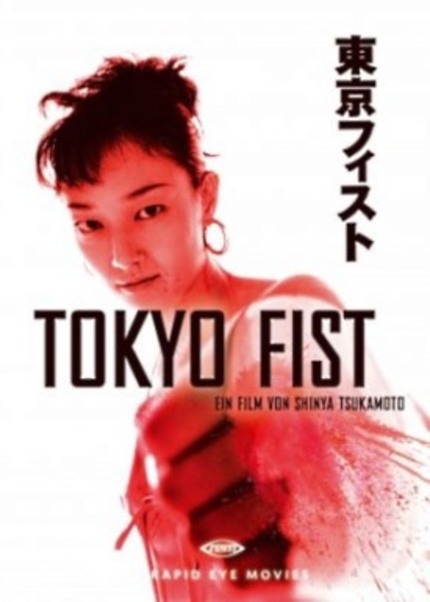 Some people firmly believe Rocky is the best boxing film out there, others swear by Scorsese's Raging Bull. If you ask me, there hasn't been any film that could match the sheer adrenaline springing from Tsukamoto's boxing hands. Tokyo Ken combines the boxing clichés with Tsuka's raging camera work and a fair share of body mutilations to create something quite unlike anything else out there in the boxing genre.

Apart from a very early studio film, Shinya Tsukamoto (Tetsuo, Tetsuo: Bullet Man, Vital, Nightmare Detective 2) has pretty much been making his own kind of films. Even his second studio feature (the Rampo-inspired Soseji) is far from normal studio fare. So if a man like Tsukamoto tackles a boxing flick, you know it's not just going to be just any kind of rise and fall story with a couple of boxing matches thrown in for good measure.

Tokyo Ken is the story of Tsuda, a pretty run of the mill salary man who relishes his relationship with his soon to be wife, Hizuru. While Hizuru lives a pleasant and comfortable life, she is more than a little disappointed by the plain and boring repetition of her everyday existence. When Kojima, an old friend of Tsuda suddenly turns up on their doorstep, both their lives will be changed forever.

Kojima lusts after Hizuru. Even though at first she holds Kojima at a distance she is clearly turned on by Kojima's wild streak, slowly allowing herself to break apart her own boring routines. She starts to experiment with piercings and tattoos, soon after she leaves Tsuda and moves in with Kojima. Tsuda has a hard time coping with Hizuru's sudden switch and takes up boxing lessons to beat Kojima at his own game. While all of that still sounds pretty acceptable, the execution is clearly something else.

Tokyo Ken is Tsukamoto's first film where he demonstrates that his films work just as well in color. Tetsuo 2 and Hiroku The Goblin weren't as visually satisfying as his previous films, Tokyo Ken on the other hand is a celebration of superb camera angles, beautiful monochrome pictures and some totally rad editing skills. The film looks lush from start to finish, a true testament to Tsukamoto's visual style.

The soundtrack too is exceptional. A combination of high octane tracks, slightly exaggerated sound effects and a bunch of moody ambient songs that highlight the urban feel of the film. Tsukamoto seems well aware that madly edited visuals don't just work by themselves and benefit greatly from a soundtrack that enforces this madness. The result in an audiovisual experience that carries the film almost by itself.

To add to the insanity Tsukamoto chose to stick with his hyperactive, highly intense acting style. It's not as manic as in Tetsuo, but it sure as hell ain't normal human behavior either. It's an acquired taste, but I feel that it works great in films like these. Kaori Fujii and Koji Tsukamoto (his younger brother) fair well as actors too, apart from these three you'll find notable cameos of Naoto Takenaka and Tomorowo Taguchi.

Once Tsuda starts with his boxing training all the usual Tsukamoto elements start to surface. Suddenly there are mashed up faces, Hizuru starts putting metal bars through her skin and blood spurts from bodies by the gallon. Tokyo Ken is a true body horror, only disguised as a drama/boxing film. People hoping to see a traditional boxing film will surely be disappointed by the course this film takes, but Tsukamoto films are sure to rejoice.

Tokyo Ken is somewhat of a forgotten Tsukamoto film, which is weird considering its many qualities. It's an exceptional audiovisual experience, a worthwhile drama and a lesson in how to properly film a boxing match. It's a pretty short film that packs quite a punch and doesn't outstay its welcome. Fans of Tsukamoto owe it to themselves to watch this one, because it's up there as one of the best films he ever made.