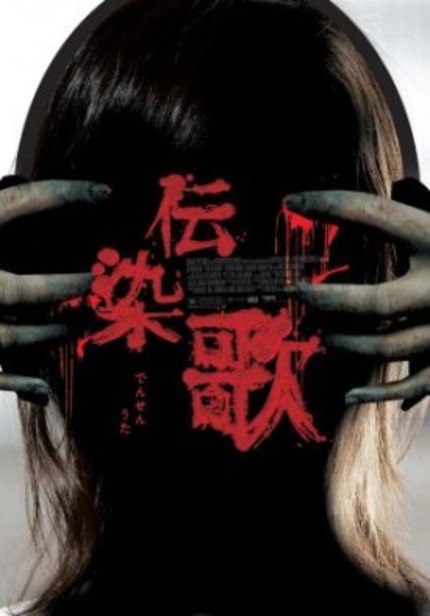 Densen Uta (Suicide Song) is one of those films that is bound to attract the wrong audience. The film is often categorized as a regular J-Horror, case in point the many reviews trying to fault it for not being something it didn't set out to be. Go in with a blank mind though, and you'll find a pretty exciting little cross-genre breed that knows to excite and surprise. Then again, Masato Harada is that kind of director so I should've known.

The similarities between Densen Uta and Jisatsu Sakuru (Sion Sono - Cold Fish, Love Exposure, Ekusute) are almost uncanny, to the point where I actually started to believe this was some kind of unofficial sequel. It turns out both films are unrelated, but the main theme, the erratic blend of genres and the level of weirdness still link the two films together. Not to mention the fact that Jisatsu Sakuru had the same preconceptions to battle upon its release back in 2001. At times Densen Uta even feels as if it belongs in Sono's oeuvre, somewhere lodged in between Jisatsu Sakuru and Love Exposure.

Densen Uta tells about a song that drives people to suicide. Once you sing along to this infamous song (which is called Gloomy Sunday, based on an actual urban legend), you are bound to end up killing yourself. It sounds like a trillion other Ringu rip-offs, but apart from this typical J-Horror setup the film has very little in common with the reigning genre clichés attached to the J-Horror label. Instead, Harada tries to find his own way, blending genres and different vibes along the way.

The suicides are picked up by the staff of an alternative magazine, who set out to uncover the truth about this alleged suicide song. The closer they get to the truth though, the more they are pulled into the myth, which turns out to be a bit more lethal than they had anticipated. When people start dying left and right, they seek the help of a local exorcist in the hope she can release them from their curse.

Harada is a pretty capable director, visually speaking. Those who've seen Inugami should already be convinced of his skills, with Densen Uta he shows he can also handle more eclectic styles. There are some superb camera moves and some pretty surprising editing tricks, the use of lighting is stylish and the film has its fair share of interesting visual setups (like the mirror scene). Harada was clearly free to experiment, which certainly helps to keep the film exciting.

The soundtrack is a bit more traditional, though it still features a rather broad selection of styles to go with the different genres mixed within the film. There's the dark and brooding horror stuff, the more upbeat comedy melodies and of course some gentle pop songs to accommodate the dramatic scenes. None of it is exceptional, but it does the job without ever becoming annoying or irritating, which accounts for something.

Luckily Harada surrounded himself with a group of talented actors. Ryuhei Matsuda takes the lead, Yusuke Iseya is a very interesting companion (though only through the first half of the film). Two young talents who are capable of carrying a film by themselves, so it's a true joy to see them playing next to each other on screen. We're also treated to a short but fun cameo of Hiroshi Abe, the rest of the cast is less familiar (unless you're into AKB48 apparently), though just as solid as the star cast.

Densen Uta is a strange little film. The mood can change quickly between different scenes (sometimes even within a single scene), there is little to no stylistic conformity (though the film is stylish throughout) and it takes a while before you realize where the film is headed, story-wise. If you were hoping to enjoy a couple of quick scares this film is bound to disappoint, if on the other hand you cherish the film's mood swings you're in for two hours of quality film making.

I actually expected very little from this film because it was labeled as J-Horror, so I was pleasantly surprised to find a very accomplished yet eclectic film hiding underneath the cover of ghosts and suicides. The acting is top notch, the film look great and sports an interesting blend of genres. There's a pretty classic horror tale hidden underneath all of this, but you won't get the time to be bored by it. Definitely worth your time if you happen to stumble upon it.

More about The Suicide Song