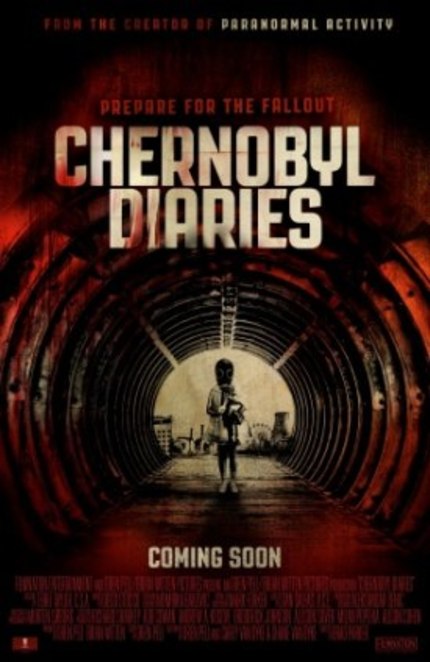 Oren "Paranormal Activity" Peli returns to the big screen after wrapping up his short and rather underwhelming series The River, finally abandoning the found footage fare for a more traditional horror setup. The result is Chernobyl Diaries, a film that takes you on a trip to experience the aftermath of one of the most gruesome disasters of the past century, exploring the wasteland that was left behind by the nuclear disaster in Chernobyl, Ukraine.

Doing a film like Chernobyl Diaries is tricky. It's a 100% genre film which means that it forsakes originality and puts all its money on execution. Different people have different tastes though, so it's really all about how you are going to experience the smallest of details. Reviews have been quite devastating, tearing the film down with typical horror criticism like plot holes, easy scares and an abundance of clichés. Welcome to the bright world of genre cinema.

First of all, let's make it clear that Chernobyl Diaries has very little in common with the PA films. There is no forced "oh yeah, we came up with some very scripted reasons to film it" antics, there is no "we can't act our way out of a kid's party but that only adds to the realism" amateurishness and thank God we are treated to a bit more than the less is very little concept of "did that door just move or is it my eyes that are starting to water after ogling the same screen for more than a minute". Parker makes sure that there's no way you'll confuse realism with bad direction, which at least for me made it a lot more bearable than the PA films.

Chernobyl Diaries does borrow the setup and aesthetic of similar found footage films though (think The Tunnel or Evidence), but uses its cinematic power to lift itself above the competition. The films starts with a group of kids subscribing to a little tour of extreme tourism, promising them the time of their life in Pripyat, the nearby city that was abandoned overnight the day the reactor melted. What follows is hardly surprising but like I said before, originality isn't exactly what this film aims to deliver.

There are several ways to add to the effectiveness of a straight-up horror film, but a strong plot clearly isn't one of them. Instead you aim for atmosphere, a pleasant cast and a strong build-up towards a hellish climax. Get your audience involved enough and they won't care much about some alleged plot holes or unlikely actions of the cast (though one can just as well question much of the couch logic that is brought up in reviews). Again, whether you succeed depends on how people react to certain details, but I'll happily admit that I haven't felt as tense watching a horror film in theaters ever since I watched the first [rec].

Parker starts with a careful selection of protagonists. Sure they aren't the smartest bunch, but at least the slut-level of the crew is acceptable enough to withstand their sometimes silly behavior. The six actually have a nice dynamic going, add to that the walking cliché of a russian ex-military tour guide and you have a group of seven that serves as perfect bait for what lies waiting.

A lot of appeal comes from the setting. The idea of entering a radio-active wasteland is exciting in itself, so even though the first part of the film is somewhat uneventful there is a constant tension brought on by an eerie soundtrack and a strong sense of something lurking in the shadows (remember Blinky from The Simpsons ?). There are a few scares left and right, but nothing out of the ordinary. The slow build-up prohibits any real revelations early on, so most of the scares are of the loud noise variety.

Then there is the presentation. Visually the film still holds true to the "right there" aesthetic, but does so in a more cinematic way. Parker attracted cinematographer Morten Søborg (Valhalla Rising, Pusher, Susanne Bier's films) to blend the hand-held aesthetic with some proper camera work. The result is a more than satisfying mix that brings out the creepiness of the surroundings while making sure you still feel like you're part of the group exploring the area around Chernobyl. The soundtrack too is of high quality. Parker dares to play with silence, contrasts it with loud scares and fills the moments in between with rather brooding illbient sounds. He creates a very tense and uneasy atmosphere that sips through even in the scenes were nothing much is happening.

Chernobyl Diaries slowly works towards its climax, with the last half hour serving as a perfect descent into madness. As the group starts to unravel they get scattered throughout the desolate city, ready to be picked off one by one. The "danger" never really makes it full focus into the audience's frame of vision, adding to the mystery of the threat and further heightening the overall tension. While the film falls just a little short of the absolute best, it comes very close and delivers 90 minutes of purely visceral horror fun. Changes are you may experience the film differently, prompting you to complain about weird Geiger counters and some stupid decisions of the main crew, but know that it's more likely to be the result of the film's failure rather than a direct motive.

Parker does everything to make sure that all the things are there for a good night of tense and thrilling horror fun, whether it will actually work depends on how you like your horror films served. Make sure to give this film a chance though, because it's quite rare to see this much talent go into a horror flick.

The film opened last Wednesday in Belgian theaters, as always be quick to catch it because films like these can disappear overnight.