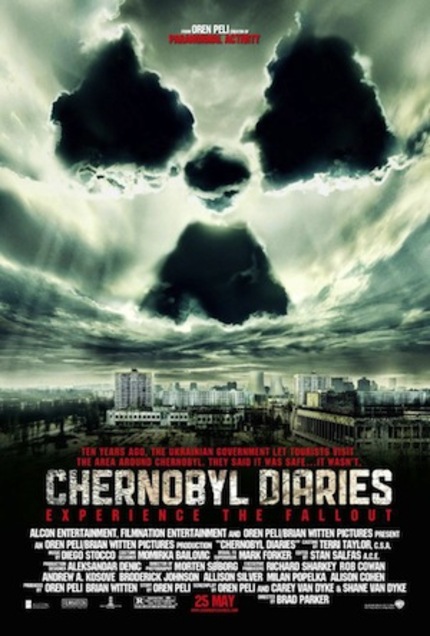 Before it starts stepping on landmines in the third act, Bradley Parker's Chernobyl Diaries sidesteps many of the hazards that have doomed similar horror movies to failure.

Parker is an experienced visual effects artist making his directorial debut, working from a script credited to Oren Peli, Shane Van Dyke, and Carey Van Dyke. (Credits for the Van Dykes include Titanic II and Transmorphers: Fall of Man). Peli also serves as one of the producers, so perhaps he influenced or encouraged Parker to follow the pattern set by Peli's Paranormal Activity.

The film has more than a whiff of Paranormal Activity in the Former Soviet Union, from its cast of lesser-known actors to its handheld camera aesthethics. In the latter respect, Chernobyl Diaries benefits immensely from the presence of Morten Søborg as director of photographer. Søborg's credits include Nicolas Winding Refn's Pusher trilogy and Valhalla Rising, as well as multiple films for Susanne Bier.

The combined effort of the talent involved results in a very solid set-up. (To be clear: It's not a found-footage movie.) On a tour of Europe, Chris (Jesse McCartney), his girlfriend Natalie (Olivia Taylor Dudley), and their friend Amanda (Devin Kelley) stop in Kiev to visit Chris' older brother Paul (Jonathan Sadowski), who moved there some time in the past. Before the trio of visitors moves onto Moscow, Paul urges an "extreme tourist" trip to the site of the Chernobyl nuclear disaster.

Led by ex-military tour guide Uri (Dimitri Diatchenko) and joined at the last minute by vacationing couple Michael (Nathan Phillips) and Zoe (Ingrid Bolsø Berdal), the merry group heads off in a van to the abandoned city of Pripyat, adjacent to the nuclear power plant. Turned away by military guards at the entrance, Uri sneaks in through a side road and begins the tour, a tour that will end in blood, terror, and screaming.

Chernobyl Diaries makes excellent use of silence on the soundtrack, as ominous signs emerge that visitors are not really welcome. As long as the film stays on the path that it has cleared -- 'Nature has reclaimed its own,' as Uri intones while the group stares at the eerily empty city gone to seed -- it's a good, tense ride. The characters may not have much depth to them, but they're not jerks or annoying brats. They're sufficiently likable to root for their survival, and though they occasionally act in head-shaking manner (the stuff that causes audience members to mutter "Don't do that!"), their basic decency overrides, or at least largely excuses, their missteps.

The tension builds from the atmosphere that's been created, and it's only when the movie ramps up the pace and steps off its own path that it begins to fall apart completely, almost as though the filmmakers lost confidence in the premise that they established so carefully. It's a shame, because the premise had more facets that could have been explored in a little greater depth. Instead, the film presses on in search of greater twists.

For any surprise to be effective, it needs to be grounded realistically -- or at least believably -- and Chernobyl Diaries stumbles badly as it makes a run for the exit. Still, it ends up better than might have been expected (feared?) from the premise, even if that only makes it slightly above average.

Chernobyl Diaries opens in Canada and the U.S. on Friday, May 25. Check local listings for theatres and showtimes.