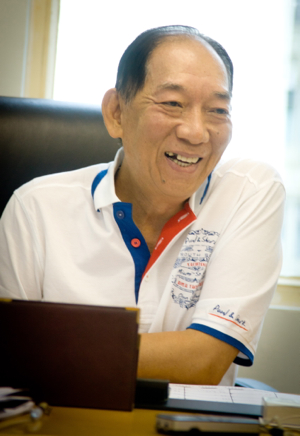 All the biggest martial arts stars in Hong Kong Cinema are pretty much on their way out now. Jet Li, Jackie Chan, Donnie Yen - they've only got a couple of years left in them. Who in your opinion are the best of the next generation?
For the younger generation there aren't many who have a good kung fu background. For example Shawn Yue and Eddie Peng could become real martial artists. I feel that there's no heritage for martial artists any more, there's a void that separates the two generations. I think actors today aren't mature enough to become martial artists, they have to spend a lot more time practicing kung fu, just like Donnie did. He spent at least 10 years training before he became a screen martial artist. But if they committed more time to training, then those young guys I mentioned, along with Wu Chun, they could accomplish something. Tony Leung Chiu Wai is also very good. I guarantee it. He hadn't done anything before The Grandmasters, but he trained in wing chun for two years before we even started filming. So by now he's been training for about five years!
We have seen the Ip Man story told three times in the last few years. What will we see in The Grandmasters that is different?
When I planned the fight scenes for this movie, I played them in a more rigid and tough style, more solid, with more strength. It will be very different to Donnie Yen's two movies. If I am doing the choreography I will show how you can kill someone with a single punch, rather than Donnie's style, and it's going to be very realistic - like the real thing. The action scenes are very important to project how strong the kung fu is. Also, there aren't any crazy foreigners in this version.
So is your work on The Grandmasters finished now?
No, we are still shooting. I'll be going back to the set after my trip to Paris to work on two big action sequences.
When working with a director as visually focused or as creatively protective as Wong Kar Wai, does your role as action director extend into the editing process? Or is your job over once filming has been completed?
I'll leave the editing all to the director, but on set both Wong and I know how the scene is going to look.
Is this your normal approach or just when working with Wong?
Only for Wong Kar Wai. Otherwise I give my advice and comments on how to best cut the action, and I'll sometimes sit in with the editor, if they are not used to cutting kung fu. I'll give feedback on the length and pacing of the scene in order to best show off the choreography, but also to best serve the story.
Right now you're working with Keanu Reeves and Tiger Chen on Man From Tai Chi. And I hear that Iko Uwais from The Raid is involved.
Seems like there is one character like that. I think he might be in Hong Kong actually. I have been training Keanu Reeves, and Tiger Chen and also a Westerner. Yeah and that Indonesian guy.
What do you think about this new wave of talent from South East Asia?
Everyone has their own style, just like Tony Jaa when he first broke out. His style was so different from anyone else's, so unique, taking really high risks. I think it is essential for martial artists to create their own style, as Bruce Lee did with Jeet Kun Do, to make you really stand out and the audiences love it.
Is there anyone from the West who you think is particularly good?
We can mention that guy who acted as the amnesiac agent...Matt Damon, he is pretty good. And Brad Pitt.
T - Really? But he doesn't do action roles.
But he has the potential.
Isn't he too old? He's nearly 50.
No, no problem. Jet Li is the same age.
And he keeps saying he's gonna retire...
Keanu is 40-something and his moves are still very good.
But is he getting any better?
Well...he's not getting any worse.
What, in your opinion, is Keanu hoping to achieve with The Man of Tai Chi?
I don't really know, but I feel that he's trying to become a director. That's what I have seen. I think he is going to do a good job. It's possible he'll become a master director in the future.
You must have made a strong impression on him - the fact that he has chosen a martial arts film as his first project.
No I don't think I inspired him, I think this is just where his interests lie. That's something which I feel is very important.
Do you think you will ever direct a film again?
Definitely. There are two scripts I am looking at right now. One is called Wu Dang.
What attracted you to it?
It's just a really good story. For me the script has always been the most important part of any project.
Photos by Rachael Lawson
Many thanks to Amory Hui and Mico Low for their help with the translation.
Sign-In to Vote
Tweet 0 Submit

Thanks for the really cool interview.

Wow, what a really great interview. Thank you for bringing this to us. I make it a point to read all of them but this one is the first one that I think I've ever felt the urge to comment on. I'm sure a lot of people have seen the film but if you haven't Miracle Fighters is a really good for what it is. I understand what Yuen was saying here about Western audiences and its definitely different (part of a sub genre I'd say) but it's great. There were a coupe of those types of movies that the Yuens were associated with and I really thought all of them were just great.
I'd add Dance of the Drunk Mantis and Magnificent Butcher to Yuen's representative list of work. To me those were also some incredible films is as equally as good as the ones that Yuen mentioned.
It was also interesting to hear Yuen's words on the Grandmasters. I admit I wasn't that excited by the project before but it has my attention now. As for what he said about Matt Damon and Brad Pitt I think I'll leave that one alone.
And lastly I think he hit the nail on the head with this generation gap and martial arts. The authenticity level is certainly dying off in my opinion. Sports are killing real martial arts and there seem to be less and less people out there now teaching that are teaching the real thing. There are a lot of people out there teaching the wrong thing or don't know what they are doing themselves. There are also a few people out there that know the real thing but don't want to teach it because of the people that are interested in learning.
I used to be affiliated with an organization that still has a living grand master. I believe that he is one of the best martial artists alive today but I also believe that he doesn't teach his real art. If he does he only teaches it to a very select few. I don't blame him either because of the people that are there to learn.
I'm honestly beginning to wonder if martial arts is going though a dying cycle right now. That would explain the majority of the movies that have been coming out over the past few years. If that's the case then hopefully it won't be that long before genuine interest in authentic and real art surfaces again and we can enjoy another high point in both the arts and film.

Where's the love for "Jacky" Wu Jing? He was Woo Ping's discovery via "Tai Chi 2" and the TV version of "The Tai Chi Master", and he's still plenty young enough. And knows authentic MA and has trained extensively for years and years. That kid is bloody amazing.

Beyond that, we may have to start looking to the West for new authentic MA film guys, like the new blood coming out of Germany, South America, the UK, and the US (thinking MJW, Scott Adkins, Eric Jacobus).

The interviewer seems to believe that age 50 is when someone can't throw a punch anymore... I really wouldn't say Donnie Yen and Jet Li are on their way out, or that Brad Pitt is too old at 50 to tackle action. I'm glad Yuen Woo-Ping feels the same ; sure I imagine you get less nimble after a while, but my Wing Chun teacher is 60 and still a fast, precise and powerful martial arts machine. It must be all the more so for all those past-fifty martial arts legends.

They're not done by any means but Yen and Li are both noticeably and clearly slower on screen than they were five to ten years ago and both are increasingly reliant on body doubles to do scenes that they'd have done themselves in a heartbeat not so long ago. They've put an immense amount of wear on their bodies over the years and it's catching up ...

I guess you're right, but personnally I find the combination of skills and gravitas in ageing martial artists like Michelle Yeoh, Yuen Biao, Sammo Hung, Yu Rongguang or the Chan-Li-Yen trinity to be very compelling, body double or not.

I think the concern is not so much that they're aging - that's natural and inevitable and, for the most part, they're all doing so gracefully - but that there's such a major talent gap behind them. These guys are winding down and there's no new generation to replace them. To answer a question above, Wu Jing was looking to be that guy but he's really been hampered by bad management which has, in turn, led to a string of bad films that have really eaten away his marketability. Hopefully the guy in Tai Chi 0 will be good.

And that is my worry. I have no issue with people aging and staying in the business. It can be done wonderfully. Kwan Tak Hing was a great example of that. It all just has to be handled in the right way. The next generation is the question. I believe the heart of real Martial Arts has eroded over the last several decades and that has had a tremendous effect on the people looking to be in Martial Arts Movies. The heart of today's artists is not the same as those that traveled a harder path. The rest of the world may be starting to offer people that are more hungry to put in the effort to become masters at their craft but China will consistently be the country that has the ability to produce the best Martial Arts films (From both a traditional point of view and an understanding of Martial Arts from an artistic point of view) consistently. This is kind of a conundrum. I'm desperately hoping for a rebirth of interest in real Martial Arts. I believe that that will be key in helping to produce new stars. If this doesn't happen I don't think the transition to the next stage of Martial Arts film will not be as nice as the last one. (New Wave)

To add to this, more than age it's the injuries these people have taken that limit them. I remember seeing Police Story 3 and thinking to myself that I could tell JC's knees were going.

I keep hoping that Wu Jing and Daniel Wu will have an upswing. I think they're both really talented.